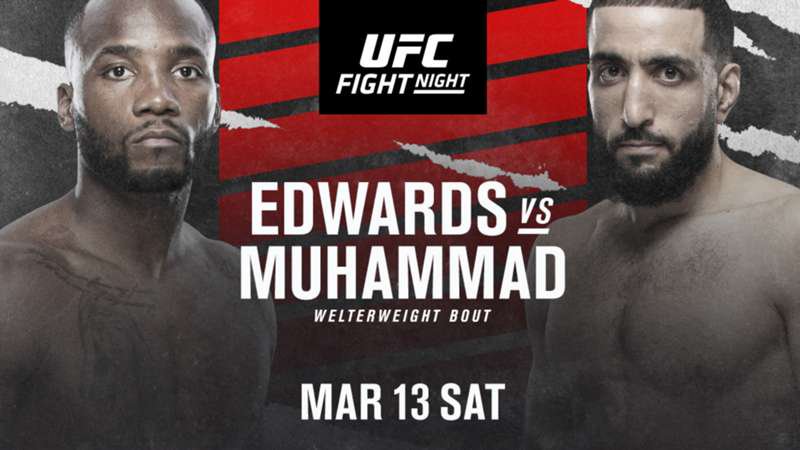 The UFC is set to host its sixth event in as many weeks on Saturday for a card headlined by a welterweight bout between Leon Edwards and Belal Muhammad. Edwards, who is currently the No. 3 ranked welterweight in the world, will be making his first appearance in the UFC octagon since July of 2019. Muhammed, on the other hand, fought just last month at UFC 258 in an unanimous decision victory over Dhiego Lima.

All odds listed are per FanDuel Sportsbook.

Leon Edwards will try to shake off the ring rust on Saturday night as he’ll look to extend his win-streak to nine-straight fights which would place him as the top contender in the welterweight division. His most recent loss was back in December of 2015 when he fell to the current champion, Kamaru Usman, via unanimous decision. This will be the longest odds set for Leon Edwards since his 2017 win against Bryan Barberena.

Belal Muhammad has a chance to skyrocket up the welterweight rankings as a win against Edwards on Saturday would give him five-straight wins. Muhammad is 2-3 in his UFC career when set as the betting underdog but this will be the first time his odds will be set at plus-money since his loss to Geoff Neal in January of 2019.

There may not be two guys in the welterweight division who go the distance more than Leon Edwards and Belal Muhammad. Both fighters have gone to the judge’s scorecards in nine of their twelve fights with the promotion which is a rate of 75%. With -186 odds implying a probably of 65.03%, there’s some decent value on betting on it to happen again at this price.

Much like Leon Edwards, this will be the first time that we’ll see Misha Cirkunov in the UFC octagon in quite some time as the Latvian fighter hasn’t competed since September 2019 in a submission victory over Jimmy Crute. The No. 11 ranked light heavyweight will be set as the betting favorite for the first time since his 2018 tilt with Patrick Cummins.

Ryan Spann will be looking to get back in the win-column after his eight-fight win streak was snapped last September in a KO loss to Johnny Walker. That fight against Walker was the only time in his UFC career that he’d been set as an underdog so he’ll look to redeem himself as a ‘dog on Saturday night.

Submission artists are few and far between in the heavier weight classes of the UFC, but these two fighters stick out among the crowd when discussing the top grapplers in the light heavyweight division. With twenty submission wins between the two of them, you can almost guarantee that this fight will end up on the mat early and often. By wagering on the fight to finish via submission you don’t need to worry about who gets their hand raised.

If you want to get a little bit more aggressive you can take Misha Cirkunov to win via submission at +260 or Ryan Spann to get the submission win at +1400.

In what could be dubbed “the people’s main event” of the card, Dan Ige is set to take on Gavin Tucker in a featherweight bout that promises fireworks. Ige will look to get back on track with a win after dropping a decision loss to Calvin Kattar last summer. The good news for Dan Ige bettors is that he’s an undefeated 5-0 in his UFC career when set as the betting favorite.

In what would be a statement win for Gavin Tucker in his young UFC career, the Canadian will be entering the cage as a +122 underdog. Tucker will be looking for his fourth-straight win within promotion and his second-straight win as an underdog. Tucker upset Billy Quarantillo in December when he closed as a +150 ‘dog.

If you’re looking for an underdog to bet on this card, Gavin Tucker could be your guy. He took two years off the sport after suffering his first loss of his career in 2017 but has looked like a brand-new fighter in his return. In his last three bouts, he’s out struck his opponents by a combined 230-148 while landing a total of 13 takedowns.

Tucker should be able to bring the fight to the ground if he chooses to do so as Ige has a takedown defense of just 59%. Ige’s experience could prove useful in this fight but it’s hard to pass up on Gavin Tucker as an underdog.