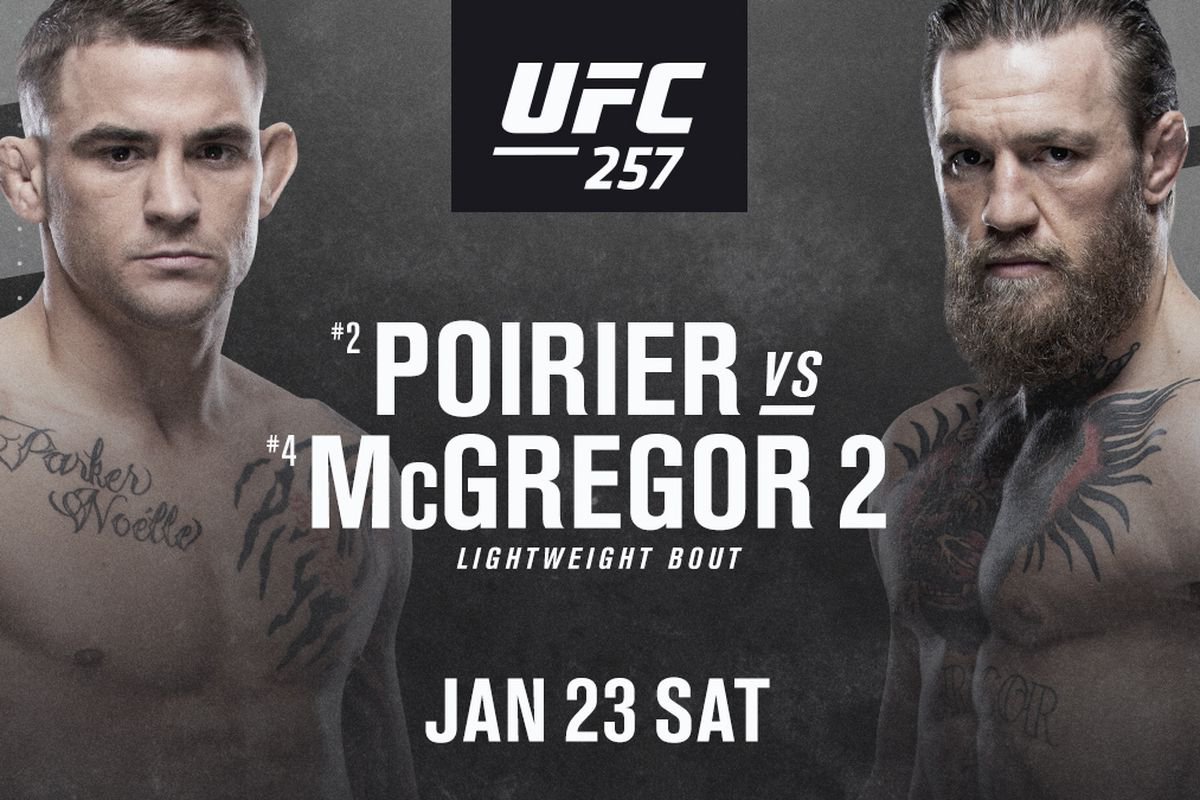 UFC 257 and the return of Conor McGregor is finally upon us. The Irishman is set to take on Dustin “The Diamond” Poirier in the main event at UFC Fight Island. Another lightweight fight that promises fireworks is scheduled for the co-main event as Dan Hooker will be welcoming long-time Bellator champion Michael Chandler to the UFC octagon.

In a card that has exciting fights in it from top to bottom, there’s ample opportunity to make some money.

All odds listed below are available at FanDuel.

We all know by now that these two competitors fought back in September of 2014 and McGregor got the better of Poirier in less than two minutes. What makes you think this time around will be any different?

Yes, Dustin Poirier has improved significantly since the original bout but so has Conor McGregor. McGregor is not known to waste any time once the bell rings as after he beat Dustin Poirier in 2014 he went on to defeat two opponents in under sixty seconds including a thirteen second KO of Jose Aldo and a forty second TKO of Donald Cerrone.

McGregor, who has called himself “Mystic Mac” for correctly predicting the outcome of his fights, has claimed that this time around he’ll be able to finish Poirier in under one minute. If that does indeed happen, it’ll be a sweat-free win on a McGregor via 1st round TKO bet.

If this is truly the best version of McGregor that we’ve seen, as he claims to be the case, this bet should be a no-brainer. History will repeat itself on Saturday night.

If you’re a long-time MMA fan that’s followed the sport across multiple promotions, you know that there’s a long history of Bellator fighters being undervalued and disrespected when they crossover to the UFC. Such was the case when Eddie Alvarez made the transition before he went on to win UFC gold.

The same can be said for Michael Chandler as he’s set to finally make his UFC debut. Many people may think that Chandler isn’t as good as the top guys in the UFC but he’s already proven that he belongs in the upper echelon of fighters. He holds three wins against fighters who at one point held a UFC title. Two of those wins came against former UFC lightweight champion Benson Henderson who Chandler knocked out in his most recent bout. The other win was against the aforementioned Eddie Alvarez, who he went 1-1 against in Bellator before Alvarez signed with the UFC.

Dan Hooker is certainly a worthy opponent but he has stumped in the past when he fights the upper tier level of fighters like we saw in his last bout against Dustin Poirier. Chandler is the more gifted fighter in almost every aspect of the fight game and it is disrespectful to see him at plus money in this fight.

This flyweight bout is between two women who will be looking to get back into the title picture after losing their only bout in 2020. Both fighters are primarily strikers so don’t expect this fight to go to the floor.

While “MMA Math” doesn’t always add up it’s worth noting that these two have a common opponent in Katlyn Chookagian. Eye defeated Chookagian via split decision in December of 2018 while Calderwood lost a decision to Chookagian in June of 2019.

Calderwood has continuously struggled when fighting against higher ranked opponents including Cynthia Calvillo and Jessica Andrade. With Jessica Eye being a former title contender, her skill level may be too much for “Jojo” to handle. Backing the higher ranked fighter as a slight underdog is the right move to make.

You can take the undefeated Ottman Azaitar to win outright at -168 but taking him to win via T/KO has quite a bit better value at +135. Azaitar is 2-0 in his UFC career with both wins coming via first round finish. He’ll look to continue that streak against Matt Frevola who is 3-1-1 since signing with the promotion.

Azaitar throws heavy and throws fast as through his first two UFC wins he lands an astounding 8.43 significant strikes per minute. While Frevola has won three fights in a row, he’s shown that he’s susceptible to being knocked out as he was finished by strikes in one minute when he fought Marco Polo Reyes in 2018.

There’s a stereotype in women’s MMA that fights always go to the judges scorecards but that certainly hasn’t been the case for these two fighters. In a combined 26 professional fights between these two women, 14 of them have been finished inside the distance which is a rate of 53.8%. Given that the odds on this happening when they meet in the octagon on Saturday are set at +152, there’s certainly some value on this bet.

Amanda Ribas is coming off one of the biggest wins of her career when she finished Paige VanZant via 1st round armbar last summer while Marina Rodriguez is coming off a hard fought split decision loss to Carla Esparza.

Both fighters are extremely aggressive when fighting on their feet. Ribas averages 4.71 significant strikes per minute while Rodriguez averages 5.04.

Amanda Ribas is the betting favorite and for good reason. With two of her four UFC victories coming via submission, a sprinkle on her to get a victory by submission once again is worth a look at +340.