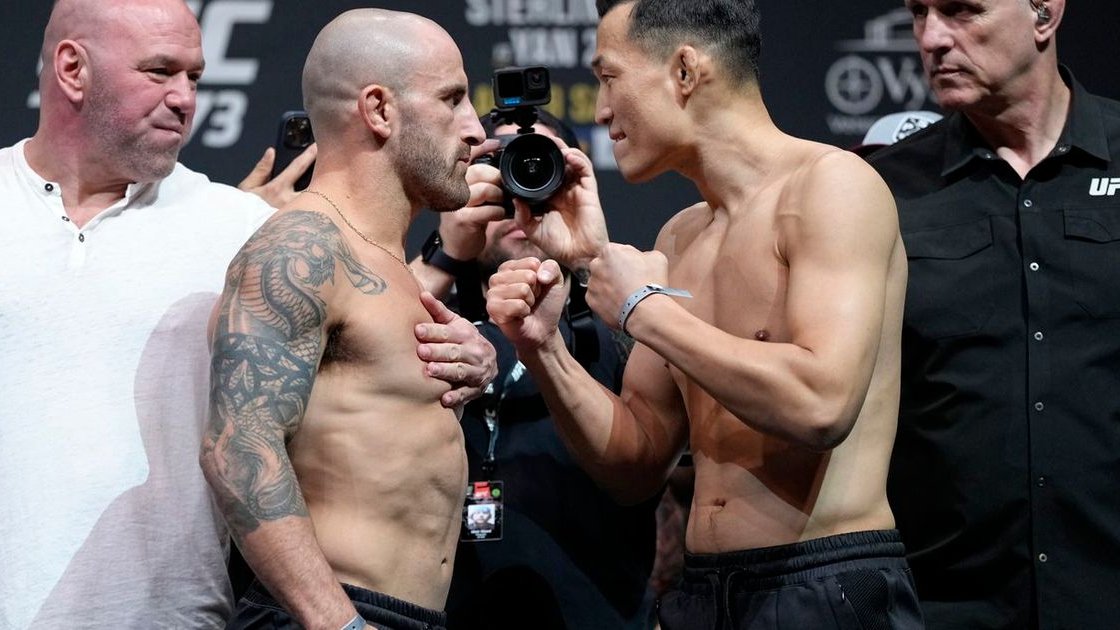 UFC 273: Volkanovski vs. The Korean Zombie is the next pay-per-view event on the mixed martial arts company’s schedule, and it’s set to take place Saturday, April 2 at the VyStar Veterans Memorial Arena in Jacksonville, Florida.

From the preliminary bouts to the main attractions, the UFC 273 card is stacked from head to toe. Having said that, a large portion of fans are looking forward to the UFC Featherweight Championship main event as Alexander Volkanovski (23-1-0) defends his title against Chan “The Korean Zombie” Jung Sung (17-6-0).

There’s a lot to take into account before Volkanovski and The Korean Zombie collide in the octagon on Saturday. Fortunately, this article has everything you need from each fighter’s recent history to the top betting options for the UFC 273 main event.

Volkanovski vs. The Korean Zombie fight odds are as of Saturday, April 9, 2022.

Alexander Volkanovski has been nothing short of dominant since joining UFC in 2016.

The 33-year-old Australian has gone a perfect 10-0 since becoming a UFC fighter, with his biggest highlight coming when he defeated Max Holloway at UFC 245 for the featherweight championship.

Since then, Volkanovski has continued being unstoppable as a champion. He’s made two successful title defenses so far. The first came when he defeated Holloway by split decision in a rematch at UFC 251.

Volkanovski then went out to defend his championship again at UFC 266 back in September 2021, this time defeating Brian Ortega by unanimous decision

What’s impressive about his last outing is that Volkanovski out-struck Ortega by a score of 214 significant strikes to 88. Also, the champion controlled 3:51 of the fight while the challenger held the upper hand for just 54 seconds.

In other words, it’s not too surprising that Volkanovski is a heavy favorite to walk out of UFC 273 victorious. Few fighters have come close to touching him and it’s hard to see that finally happening in Jacksonville this weekend.

Despite fighting in UFC for over a decade, it has been a long time since the “Korean Zombie” challenged for a championship title.

Jung’s sole previous opportunity came as he challenged José Aldo for the UFC Featherweight Championship at UFC 163 back in August 2013. He ended up losing to Aldo via fourth-round TKO, so there’s a lot of pressure on him to avoid history repeating itself.

Fortunately, the “Korean Zombie” has been building momentum in his recent appearances. He’s 7-3 in his last 10 outings, which includes winning three of his most recent four bouts.

Jung has earned “Performance of the Night” honors in two of those outings, both of which he won by TKO. He also defeated Dan Ige by unanimous decision in his last bout, which was in the main event of UFC Vegas 29, so he’ll look to continue that success against Volkanovski.

One thing that could have fans and bettors doubting Jung is that his last loss came by unanimous decision against Ortega. Considering how Volkanovski had the opposite experience, the “Korean Zombie” has a lot to prove this weekend.

UFC 273 Betting Markets for Volkanovski vs. The Korean Zombie

Even though Volkanovski is the heavy betting favorite to retain his UFC Featherweight Championship, moneyline betting odds hardly guarantee the exact result. Fortunately, there are more betting markets out there that give us a better idea as to how things could unfold.

One interesting market is on FanDuel Sportsbook, listing Volkanovski winning by decision as the most likely scenario at -120 odds. It’s hard to argue against that logic considering how his average fight time is 16:08, so a longer bout could favor the champion in the long run.

Volkanovski’s fights have gone the distance nine times over his career, with him being a perfect 9-0 in those matchups. If that wasn’t convincing enough, Volkanovski’s most recent four wins have all come by decision.

On the other hand, Jung hasn’t had the same success when his fights have gone to the judge’s scorecards. The Korean Zombie is 3-3 when his fights are decided by decision and has lost three of his last four outings that have hit the time limit.

If bettors want to try and get some extra value, Volkanovski’s second-likeliest method of victory has him winning by KO/TKO at +210. He’s yet to be knocked out in his career, whereas three of Jung’s last four losses have come by KO/TKO.

When it comes to the Korean Zombie’s best shot at victory, FanDuel Sportsbook has him winning by KO/TKO at +950 odds. Considering Volkanovski’s resistance and 60% significant strike defense rate, it’s probably best to avoid Jung in this market.

If you’re looking to spice things up with a combo bet, the ‘Method & Round’ markets might interest you. As it stands, Volkanovski’s top combo has him winning by first or second-round knockout, with both coming in at +1000. Jung’s best option has him winning by KO/TKO in Round 1 at +1900.

Regardless of how impressive the Korean Zombie can be, the smart money is on Volkanovski to retain his UFC Featherweight Championship. With all due respect to the challenger, the champion has looked unstoppable since stepping foot in the octagon.

Taking Volkanovski as such a big moneyline favorite provides little betting value. Instead, backing a Volkanovski win by decision at -120 odds on FanDuel Sportsbookis the best bet.

At the end of the day, a longer fight is Volkanovski’s style and he isn’t going to change it up to beat Jung. Besides, five of Volkanovski’s last six fights have gone the distance and it’s already been documented earlier that he’s yet to lose by decision.

You can spice things up by wagering on Volkanovski to win by knockout as well, but fans should expect the champion to retain in another lengthier defense at UFC 273.

UFC 273 will take place on Saturday, April 9, 2022 at the VyStar Veterans Memorial Arena in Jacksonville, Florida.

It has been a miserable month for the Seattle Mariners, and things are unlikely to get any better tonight as they welcome AL Cy Young Award favorite Justin Verlander and the Houston Astros to T-Mobile Park. After just missing out on the MLB playoffs last season, the Mariners entered this season with hopes of finally END_OF_DOCUMENT_TOKEN_TO_BE_REPLACED