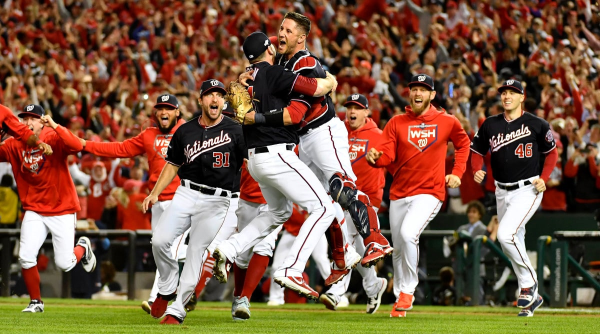 Four Major League Baseball teams earned 100-plus victories in the 2019 regular season. The Washington Nationals didn’t even win their own division, but they’re now champions of the National League with a spot booked in the World Series.

It’s been an incredible turnaround for a Nationals team that started the year 19-31 after losing Bryce Harper to free agency. But with dominant pitching throughout the playoffs, and especially in the NLCS, Washington proved that it belongs on baseball’s biggest stage.

That lead proved to be too much for the Cardinals to overcome despite managing four runs between the fourth and fifth innings.

Patrick Corbin earned the win for the Nationals by recording 12 strikeouts and allowing four runs on four hits over five innings. Washington held St. Louis scoreless for the remainder of the game, and the Nationals popped bottles of champagne to celebrate their first World Series berth.

When the playoffs were set, and experts started looking at which underdog had the best chance to represent the National League in the World Series, most pointed to Washington because of the potential for great pitching.

As the Nationals progressed through the postseason, that’s exactly what happened.

It all started with a two-out rally in the eighth inning of the Wild Card Game against Milwaukee when 20-year-old Juan Soto delivered the go-ahead hit that allowed the Nats to win by a score of 4-3.

Then, after allowing 18 runs in the first three games of the NLDS, Washington rallied back from a 2-1 series deficit to outscore the Dodgers 13-4 in the final two games of the series.

From that point forward, Washington’s pitching has been nearly unhittable.

In the first two games of the NLCS, St. Louis didn’t register a hit before the seventh inning against either Anibal Sanchez or Max Scherzer. Stephen Strasburg started the third game of the series, delivering 12 strikeouts while allowing one unearned run on seven hits over seven innings.

Sanchez, Scherzer, and Strasburg posted an ERA of 0.00 in their NLCS starts.

Before Tuesday night’s 7-4 victory, the Nationals had outscored the Cardinals 13-2 in the first three games of the series.

And when you have the likes of Howie Kendrick, who leads the team with nine postseason RBI, and MVP candidate Anthony Rendon, who’s batting .375 with seven RBI in the playoffs, the Nationals had plenty of run support to go alongside their overwhelming starting pitching.

Now, with a postseason graveyard full of the Brewers, Dodgers, and Cardinals, the Nationals have their sights set on the winner of the ALCS.

While the Nationals may rather keep their momentum going right into the World Series, they’ll have to settle for the benefit of being able to rest their arms headed into the final series of the season.

This will be the team’s first World Series ever, either as the Montreal Expos previously or since coming to Washington for the 2005 season, and they’ll continue playing the role of underdogs when they get started on the road for Game 1.

Entering the postseason, the two Wild Card losers held the worst odds to win the World Series as the Brewers (25/1) and Athletics (20/1) were quickly ousted from contention.

Of the eight teams that progressed to the divisional round of the playoffs, the Nationals held the worst odds to win it all at 18/1, following closely behind the team they beat in the NLCS, St. Louis at 17/1.