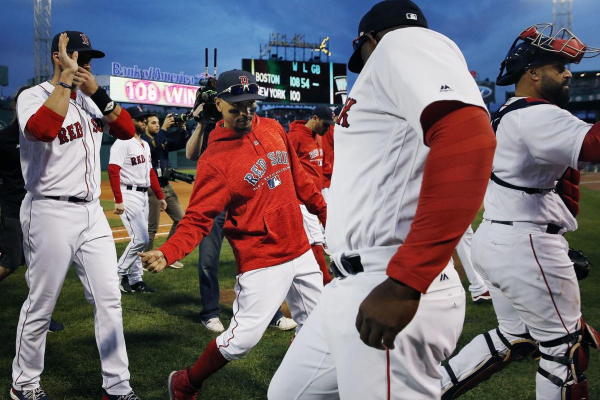 The MLB playoffs are moving along much faster than expected. Let’s get caught up on everything that’s happened over the past week, including some stuff away from the field.

Well, we’re down to the final four. In the National League, the Dodgers and Brewers will partake in the NLCS that starts Friday. The Dodgers, of course, are defending National League champions who were in this position each of the past two seasons, losing to the Cubs in 2016.

The Brewers, on the other hand, are less familiar with being in a League Championship Series. Milwaukee’s only World Series appearance came in 1982 when they were in the American League. Speaking of the American League, it’ll be the Red Sox and Astros battling it out for a spot in the World Series. This will be a rematch of the ALDS last season when the Astros won the series 3-1 on their way to winning the WorldSeries.

There will be no games on Wednesday or Thursday because all four advancing teams made quick work of things during the division series. The Brewers swept the Rockies while the Astros did the same to the Indians. The Dodgers couldn’t quite pull off a sweep of the Braves, although Los Angeles never looked threatened in that series. Even the Red Sox were able to knock out the Yankees by winning two games in New York and finishing off the series in four games.

Astros infielder Alex Bregman should have been happy about his team sweeping Cleveland in three games; however, he chose to be critique a postseason schedule that had the Astros playing day games while the Yankees and Red Sox got the prime-time slot. After Houston wrapped up the series on Monday, he complained of getting a sunburn. Fortunately, Bregman won’t have anything to complain about moving forward. The Red Sox and Astros are scheduled to play Game 1 in prime-time on Saturday night and will likely stay there for the duration of the ALCS.

After a truly disastrous season in which they lost 115 games, the Baltimore Orioles are cleaning house. Both manager Buck Showalter and GM Dan Duquette were shown their walking papers this past week. Showalter wasn’t under contract for next season and likely isn’t up to stick around for what could be a long rebuilding process. Duquette, meanwhile, helped guide the Orioles to three postseason appearances after taking the reigns prior to the 2012 season. However, he and the club have also parted ways, meaning the Orioles will look for a new architect as they start to rebuild.

Show Me the Cash

Unlike the Orioles, the Tampa Bay Rays were quite pleased with their season. The Rays were 90-72 this season despite missing the playoffs. Thus, they have rewarded manager Kevin Cash with an extension that will keep him with the club through the 2024 season, with a club option for 2025. Since Cash took over, the Rays have the 18th best winning percentage in baseball despite spending the least amount of money. Ironically, a manager named Cash has been quite good at getting the most out of a team that hasn’t spent much.

After the Cubs were eliminated in the Wild Card Game, there was a surprising amount of speculation about the future of manager Joe Maddon. However, there have been reports over the past week indicating that Maddon will indeed be back with the Cubs in 2019. The caveat is that he isn’t under contract beyond next season and it doesn’t look like he’ll get an extension.

Also, it doesn’t appear that Maddon will ask for an extension, meaning he’ll manage the 2019 season as a lame-duck manager. If things go well, there’s always a chance he’ll stick around, but on the surface, it feels like next season could be Maddon’s last with the Cubs.

For the second straight offseason, Minnesota third baseman Miguel Sano is making headlines for all the wrong reasons. Over the weekend, Sano reportedly ran over a police officer’s foot while driving a truck in the Dominican Republic. Apparently, Sano didn’t have proper ID nor did the truck have license plates. The officer broke his leg in the incident. Sano apparently knew the officer and drove him to the hospital afterward. The office also declared it an accident. Sano will face no other punishment other than appearing in traffic court.