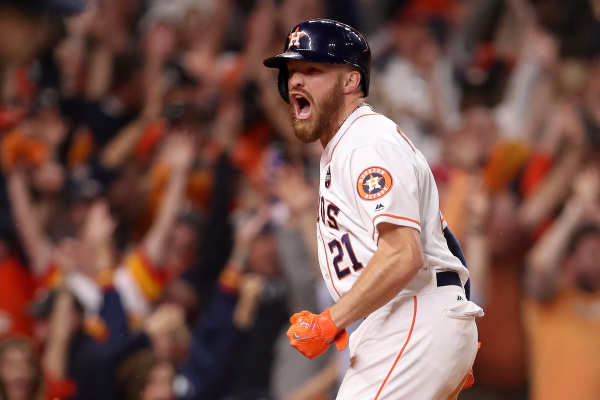 As we celebrate Independence Day, the Houston Astros (56-31) will travel to Globe Life Park to take on the Texas Rangers (38-48) as they continue their intrastate rivalry in the second game of a brief two game series. On Tuesday night, the Houston Astros won 5-3, getting a strong start from lefty Dallas Keuchel. Wednesday, the Astros will send Gerrit Cole (9-2, 2.50 ERA) to the mound to square off against the Ranger’s Mike Minor (6-4, 4.64 ERA). First pitch is scheduled for 7:05 pm ET.

The moneyline for the game is set at the Houston Astros -155 and the Texas Rangers +145. The over/under on runs scored is set at 10.

Astros Trying To Weather The Storm

The Astros broke a three game skid with their win on Tuesday night. If losing three of their last four wasn’t bad enough, they have also gotten hit with the injury bug. Carlos Correa is on the disabled list with back issues and catcher Brian McCann was just put on the disabled list with a knee injury that will put him out 4-6 weeks. Additionally, the backup catcher, Max Stassi, had to leave Tuesday’s game after being hit on the forearm with a pitch in the first inning. To weather the storm, they will have to rely on their pitching and the rest of the offense.

Speaking of their pitching staff, GerritCole will take the mound on Tuesday. On the season he is 9-2 with a 2.50 ERA, 0.92 WHIP, and opponents are hitting just .173 against him. He has struck out 151 in 111.2 innings pitched, but has also allowed thirteen home runs over that time. In his last outing, he took the loss against the Rays after going 6 innings, giving up 3 runs (1 earned), walking 3 and striking out 5. He will look to bounce back against the Rangers Wednesday.

Offensively, Alex Bregman has been one of the hottest hitters in the league over the last month. In fact, he was named the A.L. player of the month for June.

Unfortunately for the Rangers, they have known that their playoff chances have been out of reach for a while. We haven’t even hit the All-Star break yet, and they already sit 17.5 games out of the division lead. In fact, they have acknowledged that they are open for business, as the trade deadline will give them an opportunity to sell off some of their veteran pieces and look to restock their farm system. Even though they are out of contention, they would very much like to play spoiler for the Astros, their Lone Star rivals.

The Rangers will be sending MikeMinor to the mound in this matchup. On the season, Minor is 6-4 with a 4.64 ERA, 1.17 WHIP and is allowing opponents to hit .252 against him. In 85.1 innings, he has struck out 70 while walking 19. In his last start, a 5-2 win over the Padres, Minor went 7 innings, allowing no earned runs and striking out 5. He has won two games in a row (and got a no decision in a Rangers win in the game before that) and will look to continue that success against the Astros.

Offensively, Shin-Soo Choo has been there hottest hitter over the last month. In that time he is hitting .315/.455/.573 with a 1.028 OPS. During that stretch, he has also hit 6 home runs, 16 runs batted in and scored 15 runs. While he did extend his on-base streak in Tuesday’s loss, he has been hampered by a quad injury that has noticeably been affecting him.

Cole Too Much For Rangers

After breaking out of their three game skid on Tuesday, I kind of see the Astros running off five or six wins in a row, especially with the White Sox coming to town on Thursday. With that in mind, I think Cole is going to be pretty dominant and the bats will put up enough to secure an Astros victory. Just not much to like on the Rangers side these days, take the Astros -155.