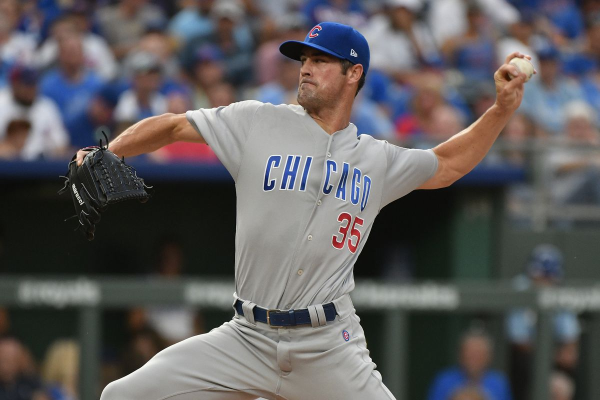 Wednesday night will feature a battle of first place teams in their respective divisions when the Philadelphia Phillies (28-20) take on the Chicago Cubs (28-18) at Wrigley Field in the third of a four-game set. The two teams have split the first two games, with the Phillies taking game one 5-4 and the Cubs taking game two 3-2. Still, both teams have played phenomenal ball early in the season, with the Phillies leading the NL East by two games over the Atlanta Braves and the Cubs leading the NL Central by two games over the Milwaukee Brewers.

If the first two games have taught us anything, it is that this series is going to feature close games that could come down to the last inning or two (or extras in the case of Monday’s game) to decide a winner. Wednesday’s pitching matchup will feature Cole Irvin (2-0, 2.77 ERA) going for the Phillies opposite of the Cubs’ Cole Hamels (4-0, 3.13 ERA). First pitch for this one is scheduled for 8:05 pm ET.

The moneyline for this one features the Philadelphia Phillies +130 and the Chicago Cubs -150.

The old saying is win the series at home and split on the road. If the Phillies can take Wednesday’s game, they will guarantee a split of the four-game series at Wrigley and would likely be a pretty content team against a really hot club in the Cubs.

To do so, they will look to Cole Irvin to go deep into the game. On the season, Irvin is 2-0 in two starts with a 2.77 ERA, 0.92 WHIP and opponents are hitting just .200 against him. In 13 innings pitched, he has allowed 10 hits, four earned runs and has struck out seven versus two walks. In his last outing, a 5-4 win over the Colorado Rockies, Irvin went six innings, allowing five hits, one walk, three earned runs and struck out two. He will look to build off of this against the Cubs Wednesday.

From an offensive perspective, the Phillies have had solid contributions, but not necessarily from the guys they expected. Notably, Bryce Harper has struggled on the season. He is currently batting .224/.360/.454 with nine home runs, 31 runs batted in, and 29 runs scored. Harper has struck out 64 times versus 35 walks. In the last week, though, he has been a bit better, hitting .250/.300/.571 with two home runs and six runs batted in.

One new player that has performed well is Jean Segura. On the season, Segura is hitting .318/.363/.484 with four home runs, two triples, 20 runs batted in and 30 runs scored. Throw in players like JT Realmuto, Rhys Hoskins, and Andrew McCutchen, and this lineup can still be dangerous.

After starting the season off poorly, the Cubs have been one of the hottest teams over the last month or so. Many factors contribute to this, but their pitching has been especially good as of late, and Wednesday’s starter, Cole Hamels, is no exception to this.

On the season, Hamels is 4-0 in nine starts with a 3.13 ERA, 1.15 WHIP and opponents are hitting just .216 against him. In 54.2 innings, he has allowed 43 hits, 19 earned runs, seven home runs and has struck out 54 versus 20 walks. In his last outing, a 14-6 win over the Nationals, Hamels went five innings, allowing seven hits, three walks, two earned runs, and five strikeouts.

I really went back and forth on my prediction for this one but, ultimately, my decision came down to two factors. First, as good as Cole Irvin has been, Cole Hamels has a longer track record to go off of. Irvin is not immune to contact and doesn’t strike out a lot of guys. It would not surprise me if he got a dose of reality in this one, and the Cubs’ bats were able to get to him.

Additionally, the Phillies had a huge letdown on Tuesday, blowing a save opportunity and a one-run lead in the ninth to ultimately drop the second game 3-2. I think the Cubs ride that momentum to another win on Wednesday on the shoulders of Cole Hamels. For my money, I am taking the Cubs at -150.