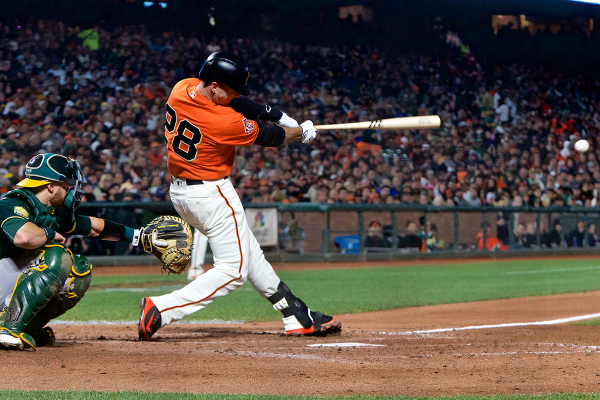 The NL West has been a tightly contested division all season long. Even as we stand today, there are four teams within 5 games of each other. Currently, the Arizona Diamondbacks sit atop the NL West with the Los Angeles Dodgers and the Colorado Rockies a game back. The San Francisco Giants sit at 5 games back. Two of those teams will face off Tuesday as the Giants (60-60) travel to Dodger Stadium to take on the Dodgers (64-56). The Giants won the first game of the three-game series 5-2 after the bullpen blew the save for the Dodgers in the ninth. Trying for two in a row, the Giants will send Andrew Suarez (4-8, 4.64 ERA) to square off against the Dodgers’ AlexWood (7-6, 3.58 ERA). First pitch is scheduled for 10:10 pm ET.

The moneyline for Tuesday’s game is set at the San Francisco Giants +170 and theLos Angeles Dodgers -180. The over/under for runs scored is set at 8.

Despite battling injuries all season long, particularly to their pitching staff, the Giants have found a way to hang around. As the season continues to wind down, though, they are going to have to start picking up games if they have any hope of winning the NL West. Looking to do so, the Giants will turn to southpaw Andrew Suarez to help take the first two games of the series. On the season, Suarez is 4-8 with a 4.64 ERA, 1.33 WHIP and opponents are hitting .283 against him. In 110.2 innings, he has struck out 96, walked 26 and has allowed 17 home runs. His last three starts have certainly left something to be desired. In those starts, he is 1-2, but he has allowed 15 earned runs in 16 innings. During that three-game stretch, he had 13 strikeouts. He will need to be better if he hopes to contain the Dodgers’ lineup.

Offensively, the Giants might have taken a blow in Monday’s game. In the fourth inning, Brandon Crawford ran into left fielder Gorkys Hernandez going for a fly ball hit by Clayton Kershaw. After the collision, Crawford stayed in the game to hit in the fifth inning before being replaced. While we don’t know if there is an actual injury or not, it wouldn’t be surprising to see Crawford sit as a precaution on Tuesday. On the season, the All-Star starter is hitting .276/.348/.433 with a .781 OPS. He has 11 home runs, 45 runs batted in and has scored 52 times. Even more disappointing is that Crawford has had success in his career against Wood, batting .333 with 2 home runs in 18 at-bats.

Dodgers Look To Overtake Division Down The Stretch

With the playoffs in their sights, the Dodgers will turn to Alex Wood to take the mound in game two of the series. On the season, Wood is 7-6 with a 3.58 ERA, 1.17 WHIP and opponents are hitting .244 against him. In 123.1 innings, he has 107 strikeouts, 30 walks and has allowed 12 home runs. While his season numbers have been solid, this will actually be his first start since August 3rd. He has been on the disabled list with left adductor tendinitis. In that last start, he went 6 innings, allowing one earned run and striking out 4 against the Houston Astros. Coming off of injury, though, it will be interesting to see how deep into the game coach DaveRoberts lets his starter go.

The Dodgers bullpen showed Monday that they already miss All-Star closer Kenley Jansen. The star closer suffered a scare last week when he suffered an irregular heartbeat. In fact, doctors had to use electrical shock in order to get the heartbeat back in order. While he has admitted that he may require offseason surgery for it, he is hopeful he will be able to pitch again this season. He has an appointment scheduled on August 20 to determine his next steps. In the meantime, the Dodgers will have to find a way to piece saves together, something they were unable to do Monday.

Unfortunately for the Giants, there just isn’t a whole lot to like in this one. Suarez has not pitched particularly well as of late and one of their best hitters, especially against Alex Wood, had to leave the game on Monday. I think the Dodgers have some success against Suarez, and I see them winning this one pretty comfortably. Take the Dodgers at -180.