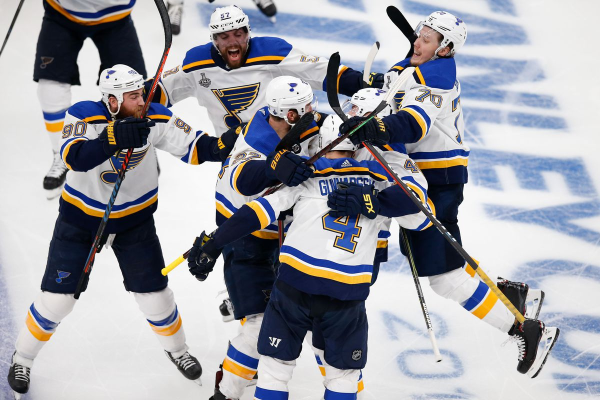 St. Louis will be jumping, as the city will be hosting its first Stanley Cup Final game in 49 years tonight. With the series tied at one, the Blues can solidify their new home-ice advantage with a win, while the Bruins can reclaim home-ice once again.

Here is a brief recap of Game 2, followed by some keys for each team for Game 3 as well as a final prediction.

Carl Gunnarsson’s blast from the blue line in overtime gave the Blues a 3-2 win to steal Game 2 on the road. It was the first win in the Stanley Cup Final in franchise history, as the Blues had gone 0-13 before the victory.

The game started off shaky for St. Louis, with Charlie Coyle’s power-play goal giving Boston an early 1-0 lead. Robert Bortuzzo would answer a few minutes later, only to see Boston retake the lead 40 seconds later with Joakim Nordstrom’s go-ahead score. But the Blues would answer again before the first period came to a close, as Vladimir Tarasenko buried his 10th goal of the postseason to tie the game at two.

The following 40 minutes were hard-hitting and aggressive. Period 2 had four penalties called, including a high-stick double-minor on Connor Clifton. The next period only had one penalty but still featured lots of physical play along the boards and no scoring. Late in the third, Gunnarsson had a shot go off of the crossbar, less than an inch from giving the Blues the lead, before he won it in overtime.

One thing that has really stood out through the first two games is the poor play of Boston’s first line. Brad Marchand, David Pastrnak, and Patrice Bergeron have combined for two points (an empty-netter from Marchand and secondary assist from Pastrnak) and are a combined -7. The Blues have done a great job of frustrating this line and limiting chances thus far. You have to think they’ll get going eventually, but head coach Bruce Cassidy has broken them up in the past and may resort to that again if this line doesn’t perform tonight.

This key may also correlate with the first one, but Boston’s power play may need to improve a bit more. The Bruins have done an excellent job of drawing penalties, as they’ve had 10 power plays through the first two games. However, they’ve scored just once on those power plays each game, a decent drop-off from the 33% mark they were at coming into the Final. If the Blues are going to continuously commit penalties, the Bruins eventually have to start capitalizing more regularly.

The Blues are a team that prides itself on depth, and that depth will be tested tonight. Oskar Sundqvist will be out after his hit on Matt Grzelcyk earned him a suspension for Game 3. There’s also a good chance that Robert Thomas and Vince Dunn will also be out after each of them missed the previous game due to injuries. Sundqvist has been incredibly effective on the penalty kill as well as his scoring (four goals, five assists this postseason). It will be up to someone like Robby Fabbri or Zach Sanford to pick up the slack.

Hosting their first Stanley Cup game since 1970, the Blues will no doubt be cheered on by a loud, crazy crowd. They will need to harness that energy positively and stay even-keeled, especially with their propensity for hard hits and aggressive play. St. Louis will also have to be focused right out of the gate, as early mistakes will allow Boston to claim momentum and change the energy in the arena.

As the series currently stands, St. Louis’ hard-hitting may eventually catch up to them and slow them down, as will the return of Boston’s dynamic scoring trio. But I don’t think those things will happen just yet, so I’ll take the Blues -115 to win at home and take a 2-1 series lead.