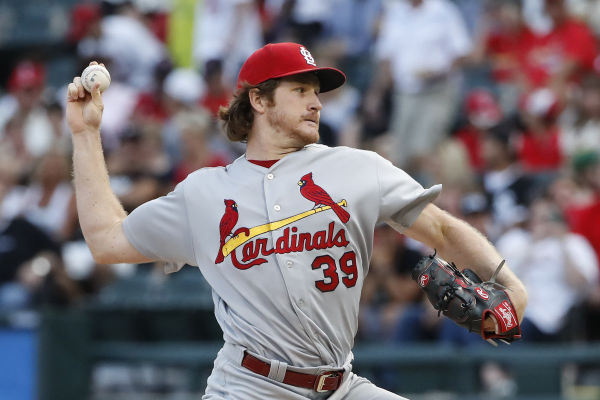 Objects in the mirror are closer than they appear. The NL Central is all of a sudden becoming a pretty close race again and the St. Louis Cardinals and Milwaukee Brewers are the benefactors. With the Brewers and Cardinals having won Tuesday night and the Cubs losing, the Cubs’ lead sits at just 3 games over the Brewers and 4.5 over the Cardinals. While that is still a relatively comfortable margin, a lot can change in a month, especially given that the Cubs have to face both of the other two 7 more times before the month is over.

For the Washington Nationals, this is certainly not the way that they envisioned the last year of Bryce Harper’s tenure with the Nats going. They currently sit 7.5 games back of the Atlanta Braves in the NL East and they have all but waved the white flag, especially given the fact that they traded players like Daniel Murphy and Matt Adams away.

The Cardinals and the Nationals will meet in the third and last game of the series, as they have split the first two. After a 4-3 win by the Nationals on Monday, the Cardinals came back with an 11-8 win Tuesday night. The two will square off as the Cardinals (77-62) travel to Nationals Park to take on the Nationals (69-70). The pitching matchup will consist of Miles Mikolas (13-4, 2.96 ERA) going for the Cardinals against Tanner Roark (8-14, 4.03 ERA). First pitch is scheduled for 7:05 pm ET.

The money line for Wednesday night’s game is set at the St. Louis Cardinals +113 and the Washington Nationals -123. The over/under on runs scored is set at 9.

Currently just a game ahead of the Los Angeles Dodgers for the second wild-card spot, the Cardinals are trying to hang onto a chance at the postseason. To try to do that, they will send righty Miles Mikolas to the mound on Wednesday. This season, Mikolas is 13-4 with a 2.96 ERA, 1.11 WHIP and opponents are hitting .250 against him. In 167 innings, he has 117 strikeouts, just 27 walks and has allowed 14 home runs. In his last outing, a 2-0 loss to the Pirates, Mikolas went 5 innings, allowing both earned runs and striking out 5.

Nationals Trying To Save Face As Season Ends

At this point, the Nationals might just be happy to finish above .500. In what is one of the most disappointing seasons in recent memory for the Nats, not much has gone right for them. Still, they are trying to battle as the season ends and will try to play spoiler for some potential playoff teams. To do so, they will start on Wednesday by throwing Tanner Roark against the Cards. On the season, he is 8-14 with a 4.03 ERA, 1.23 WHIP and opponents are hitting .250 against him. In 165.1 innings, he has 137 strikeouts, 48 walks and has allowed 21 home runs.

While Bryce Harper has not had a statistically awful year, the Nationals were hoping for a lot more this year. On the season, the soon to be free agent is hitting .246/.381/.500 with a .881 OPS. He has 31 home runs, 87 runs batted in and has scored 87 runs. One of the most alarming things, though, is his strikeouts, which currently sit at 145 compared to 101 walks. He is still going to get paid by someone this offseason, but I am sure even he was hoping for a better season.

It is just hard to think that the Nationals have much to play for. As mentioned earlier, they have basically conceded the division and are basically just trying to finish out the season. For the Cardinals, it is all on the line. They are desperately trying to win each game to secure a postseason shot. There are just a lot of things I like for the Cardinals in this one. I prefer their starter, I prefer their offense and I prefer their moneyline. At +113, I will take the odds on the contender as opposed to the pretender.