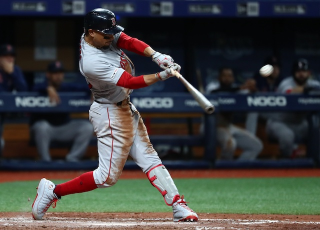 If the Dodgers end up as World Series champions this season, they’ll likely be able to look back at yesterday’s blockbuster deal as the reason why. Tuesday evening, the Dodgers and Red Sox agreed on a deal that sends Mookie Betts and David Price to Los Angeles.

In return, Boston will receive a package that includes outfielder Alex Verdugo from L.A. and pitching prospect Brusdar Graterol from Minnesota, the third team in the trade. For their role in the deal, the Twins will receive starter Kenta Maeda.

According to reports, the Dodgers were in a battle with the Padres to land Betts. In the end, L.A.’s willingness to take on Price’s contract is what allowed them to get the deal done, as the pitcher has three years and $96 million left on his deal.

Betts, who will make $27 million this year before becoming a free agent at the conclusion of the 2020 season, is likely to make upwards of $400 million on the open market.

Boston was eager to offload Betts and Price in an effort to get below the luxury-tax line, which is set at $208 million.

While Price is a big name attached to the deal, this trade was done to get Betts on the roster in a move that makes Los Angeles the favorite in the National League.

What Betts, Price Bring to the Dodgers

The apple of the Dodgers’ eye was Mookie Betts, the former MVP who’s proven to be a championship-caliber player and one of the best bats in the league.

In approximately 5.5 seasons with the Red Sox, Betts tallied 42 wins above replacement.

All of the above points to the fact that Betts is a premier player in the MLB, and one the Dodgers were willing to pay handsomely to get for only a single year because they know what he can bring to a lineup that already includes MVP Cody Bellinger, Max Muncy, and Justin Turner, among others.

Los Angeles had been largely silent for most of the off season while watching big-name free agents like Anthony Rendon, Stephen Strasburg, and Gerrit Cole sign elsewhere. Now, they’ve finally made their move.

As for Price, the starter should slot straight into the rotation. In 2019, Price went 7-5 with a 4.28 ERA. If Price can return to a level anywhere his Cy Young Award-winning self from 2012, the Dodgers would be ecstatic.

Since opening the offseason at +1200 odds to win the 2020 World Series, the RedSox had seen their odds drop to +2500 prior to yesterday’s deal. After offloading Betts, Boston is now a longshot with odds of +3000.

On the flip side, the Dodgers are now where they need to be in order to make up for their failures in the postseason in recent years – at the top of the NL.

Before this blockbuster trade, Los Angeles had seen their odds improve from +600, where they opened, to +500. After the deal, the Dodgersare now looking at odds of +350 to win the World Series.

By adding Betts to an already-loaded roster, the Dodgers are now ready to claim their first World Series title since 1988.