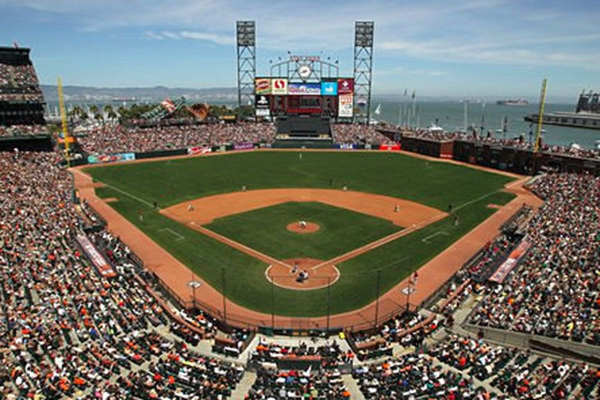 Neither the Chicago Cubs nor the San Francisco Giants lead their respective divisions, but both of them are within striking distance. The Cubs have been one of the hottest teams in baseball, going 8-2 in their last 10 games while the Giants have been 5-5, but both teams are capable of stringing together some wins.  The two teams will square off Monday night in the first game of a three game series when the Cubs (51-36) travel to AT&T Park to take on the Giants (47-45). The Cubs will send Kyle Hendricks (5-8, 4.27 ERA) to the bump to square off against Andrew Suarez (3-5, 3.92 ERA). First pitch is scheduled for 10:15 pm ET.

The moneyline for Sunday’s game is set at the Chicago Cubs -107 and the San Francisco Giants -103.  The over/under on runs scored is set at 7.5.

While the Cubs have been playing good ball as of late, one player who has continued to scuffle this year has been righty KyleHendricks.  On the season, he is 5-8 with a 4.27 ERA, 1.25 WHIP and opponents are hitting .251 against him. In 97 innings pitched, he has struck out 72 versus 30 walks.  The most concerning thing, though, is he has given up a team high 16 home runs. In his last outing, a 5-3 win over the Tigers, Hendricks took a no decision after going 5 innings, allowing 3 earned runs and striking out only 2.  The two starts before that, he gave up a combined 10 earned runs in 8.1 innings pitched. Ultimately, Kyle Hendricks has not been the rock solid pitcher that he has been for the last couple years and the Cubs are hoping to get him turned around in the second half of the season.

Offensively, Javier Baez has been pretty amazing this year. It is no wonder that he will be the starting second baseman for the NL All-Star team.  Over the last 30 days, Baez is hitting .396/.434/.648 with a 1.083 OPS. In that time he has 3 home runs, 19 runs batted in, 21 runs scored and has added 7 stolen bases.  The other NL All-Star starter for the Cubs is catcher Willson Contreras. On the season, he is batting .287/.372/.466 with a .838 OPS. He also has 7 home runs, 34 runs batted in and has scored 32 runs.  While many hoped his numbers would be higher at this point in the season, they have still been good enough to get him the nod in the All-Star game.

Giants Looking To Move Up In NL West Standings

The Giants are only 3.5 games out of first place in the NL West.  Unfortunately for them, that puts them tied for third in their division.  The Giants, Rockies, Dodgers and Diamondbacks are all within 3.5 games of one another.  The Giants have to be encouraged that they are so close, though, with the team starting to inch towards being healthy.  At one point they had Madison Bumgarner, Johnny Cueto and Jeff Smardzija all on the disabled list. The one benefit from this is that they did find some players to step up, including Andrew Suarez.

The lefty is currently 3-5 with a 3.92 ERA, 1.23 WHIP and opponents are hitting .273 against him. In 78 innings he has struck out 72, walked 15 and allowed 10 home runs. While none of those numbers seem that great, he has been pretty solid as of late.  In his last three starts, Suarez has gone 18.2 innings and has only given up a combined 3 earned runs.

Offensively, the Giants have some players who have had some success against Hendricks.  Brandon Belt has hit .385 over 13 at bats, including a home run. Brandon Crawford is 3 for 10 against him, and Gorkys Hernandez has taken him deep once.  Albeit in limited bats, Hunter Pence and Pablo Sandoval have also had some success.

It is tough picking against the Cubs with how well their offense has been playing, but Kyle Hendricks has just not looked himself this year.  He is 1-5 in his last seven starts and he has struggled with his fastball command. Suarez, on the other hand, posted a 2.62 ERA in June and looked good again in his first outing of July.  There is a reason the moneyline is so close because this one could go either way, but I am going with the hotter pitcher. Take the Giants -103.