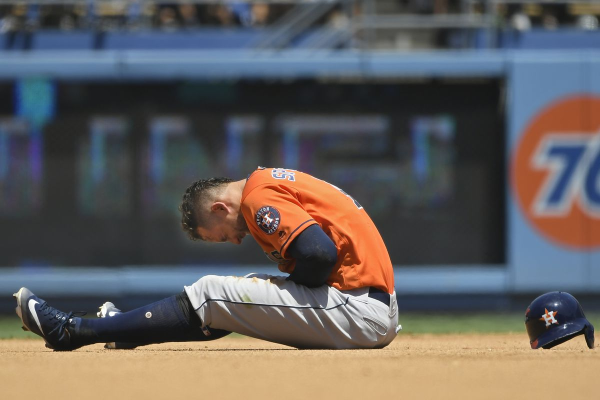 It was another interesting week in baseball, as one of the top teams in the league is in the headlines for all of the wrong reasons. Let’s take a look at all of the top developments from the past week.

The Houston Astros have been the victims of a rash of injuries over the past week. It started with George Springer suffering a hamstring injury that sent him to the IL and will cost him a few weeks. Then Jose Altuve was pulled off his rehab assignment. Altuve’s initial injury has healed, but he experienced discomfort related to knee surgery he had last fall, so his stay on the IL will be extended by a couple of weeks.

Joining those two on the IL is shortstop Carlos Correa, who will sit out for four to six weeks because of a cracked rib. Correa apparently suffered the injury while receiving a massage at his home. On top of those three, the Astros also lost backup infielder Aledmys Diaz to a hamstring injury. Diaz would have been a key player to have with both Altuve and Correa out, so the Astros are going deep into their infield depth at the moment.

Dustin Pedroia held a press conference this week to share what most of us already knew, which is that his playing days could be over. The longtime Red Sox second baseman is still struggling with a chronic knee injury that has limited him to less than a dozen big league games since the end of 2017. Pedroia announced at the presser that he’s taking a break from his rehab so he can think about his next step. He’s still under contract through the 2021 season, but this looks like it could be the end of the line for Pedroia.

Phillies outfielder Odubel Herrera went on administrative leave this week after being arrested in Atlantic City on domestic violence charges. Police found Herrera’s girlfriend at an Atlantic City hotel with “visible signs of injury to her arms and neck.” A court date has been set for June 17. Meanwhile, Herrera will spend at least seven days on administrative leave while MLB conducts its own investigation into the incident, potentially punishing Herrera outside the legal system.

Guess who’s heating up again in the AL East? It’s the Tampa Bay Rays. The Rays have won six games in a row and eight of their last nine, including a 14-3 thrashing of the first-place Twins on Thursday. With the winning streak, Tampa Bay has taken a commanding lead in the wild-card race and pulled back within a half-game of the Yankees.

Another team to make waves in the American League over the past week has been Oakland. The A’s dropped back-to-back games to the Angels this week to cool down, but that was after the team won 10 games in a row to climb above .500. Last year’s wild-card participants are rolling again and have a big opportunity to make up ground in the AL West this weekend against the ailing Astros.

Over in the National League, the hottest team may be the Colorado Rockies. The Rockies are currently riding a five-game winning streak, including a four-game sweep of the Diamondbacks. They’ve won eight out of 10 overall despite losing Charlie Blackmon to the IL because of a calf strain this past week. The Rockies are still just a game over .500 but are clearly moving in the right direction.

It’s worth noting that the saga with free agents Craig Kimbrel and Dallas Keuchel could soon come to an end. With the MLB Draft set to start on Monday, teams won’t have to worry about giving up a draft pick to sign those two players starting the day before the draft. That figures to open up the market for Kimbrel and Keuchel to sign somewhere.

The baseball world lost a great man this week with the passing of Bill Buckner after a battle with Lewy body dementia. Sadly, Buckner is best remembered for the ground ball that went under his legs in Game 6 of the 1986 World Series. He actually became good friends with Mets outfielder Mookie Wilson, the player who hit that fateful ground ball. But there was a lot more to Buckner than that one play. He played 22 seasons in the majors for five different teams, collecting 2,715 hits and winning the 1980 National League batting title. Buckner was just 69 years old.