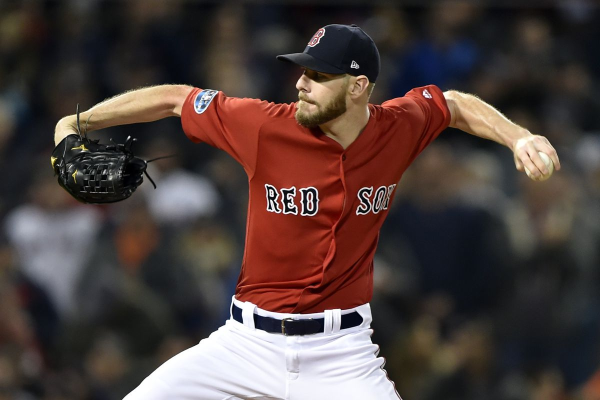 We have a full 15-gamer on tap for the MLB main slate tonight, which has a lot of pitching to pay for. This slate has a lot of options at all levels, but I think there are a lot of options that should be popular. I want to attack DraftKings today, as they have a solid payout structure in their biggest tournament and I love the price tags on a few options, where I will likely look to attack heavily.

At the top of the board, we see three pitchers over $10,000 in Maeda, Sale, and Corbin. Of the three, I think that Chris Sale projects as the best because he is the most talented of the three. However, I don’t plan on having a significant amount of any of these three pitchers because I think there are better options at a cheaper price. I would prefer Sale over Corbin over Maeda if I had to rank them.

Caleb Smith has pitched like an elite pitcher this season until having a rough game against the Nationals last outing. Smith is someone that I have attacked over the last two seasons because of his strikeout upside, but his price is at a point where you are not really getting upside at any sort of discount. I don’t mind Smith, but he is similar to the pitchers above him to where I am not attacking them.

Trevor Bauer is my favorite pitcher on the slate, and I think I am going to attack the upside in the spot with the $9.2K price tag. Bauer has struggled a lot recently, but I think it is simply a command issue. Bauer’s stuff has still produced strikeouts, so I think attacking the upside of Bauer is just worth it against a K-heavy White Sox team.

Mike Foltynewicz is another really interesting pitcher on the slate, and I think that I want to fade the field on. Folty has been horrible since returning besides his last two games. This is a good matchup, but the park is not good. If the field is looking to use Folty as a high-upside option, I will probably avoid him because he has been horrible at times. If the field is shying away because he has been really bad overall this season, I won’t mind using Folty as a low-owned upside arm with talent.

Jon Duplantier is a talented prospect that will be getting a pretty bad Mets lineup, but I am pretty concerned that he will be limited. If word comes out that he will be given a leash around 90 pitches or more, I am in. I don’t expect that to be the case, though.

My two favorite salary-saving pitchers are Miles Mikolas and Tyler Mahle, who are both just way more talented than their price tag. Both are in bad spots, but the price tags are just too low for their talent, especially on a big slate with a lot of good bat options. I prefer Mahle for upside, but Mikolas projects as a better play. If you want to save money at both spots, I would be fine with JA Happ, Danny Duffy, and maybe even Chris Archer. I don’t want to play these players, but they have all had elite upside in their career, and they do still have talent relative to their price.

The best play on the slate is the Rockies against Edwin Jackson and the Blue Jays. The Rockies are not too expensive, and I think that the Rockies will not be owned enough in this elite spot.

The Royals and Indians are lineups that lack a ton of pop, but they are in good offensive spots. I will probably avoid these stacks in GPPs but use individual hitters in different builds.

This is a strange night where I really want to focus on the Rockies and then be different at other spots. In a tournament lineup, I don’t mind using White Sox, Yankees, or Cardinals as mini stacks for a few different reasons. The Yankees and White Sox are similar in that they are facing elite pitchers that have probably struggled more than we would expect to start the season. Sale is on another level than Bauer, but I would say the Yankees offense is better than the White Sox as well. I don’t want five of these guys, but getting the two that hit home runs at 0% ownership would be nice with a very chalky stack.

The Cardinals are a team that intrigues me as an offense to stack off of the board. The Cubs’ front end of the bullpen is not very good, and Yu Darvish has had massive walk issues this season. The most likely outcome is that Darvish has a good game because he is a talented pitcher, but if he struggles to find the zone, this could be an unowned offense with a massive night as a full stack.