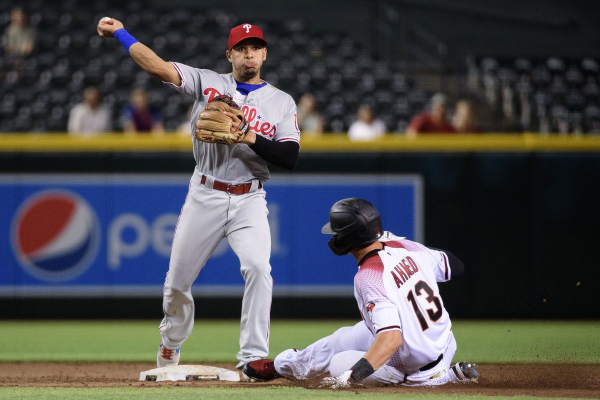 It is a matchup of NL East versus NL West on Wednesday when the Philadelphia Phillies (59-54) take on the Arizona Diamondbacks (57-57) at Chase Field.  For the Phillies, they are right in the mix for a postseason spot but will need to continue to play well in order to get it.  They currently sit seven games back of the Atlanta Braves in the NL East but are in a dogfight with Washington, St. Louis, Milwaukee, and the New York Mets for a Wild Card spot.

For the Diamondbacks, the road to a postseason berth is a little more challenging, but they still only sit 2.5 games back of a spot.  The matchup for this one features a pair of starters obtained prior to the trade deadline.  For the Phillies, Jason Vargas (6-5, 3.93 ERA) will take the mound opposed by the Diamondbacks’ Zac Gallen (1-3, 2.72 ERA).  First pitch for this contest is scheduled for 9:40 pm ET.

The moneyline for this one currently sits at the Philadelphia Phillies at +126 and the Arizona Diamondbacks -136.   The over/under for runs scored sits at 9.5.

Phillies Try To Take The Series

After splitting the first two games of this series, the Phillies will look to leave Arizona with a series win Wednesday.  To do so, they will be sending lefty Jason Vargas to the mound.   On the season, Vargas is 6-5 in 20 games (19 starts) between the New York Mets and Phillies. In that time, he has a 3.93 ERA, 1.25 WHIP and has struck out 86 in 100 2/3 innings.

In his last start, a 4-3 loss to the White Sox, Vargas went 6 1/3 innings, allowing five hits, one walk, and two earned runs while striking out five.  He will look to build on this outing against Arizona.

While the Phillies likely hoped for a little more after their acquisition of Harper, he has still been relatively productive.  This will be the first time that anyone on the Phillies has faced Gallen.

One of the biggest shockers of the trade deadline was the last-second trade between the Diamondbacks and Houston Astros that sent Zack Greinke to Houston for four of the Astros’ top-30 prospects.  Despite the trade, the Diamondbacks are still in a position to contend for a Wild Card spot and will send another trade-deadline acquisition, Zac Gallen, to the mound to try to take the rubber match.

On the season, Gallen is 1-3 in seven starts with a 2.72 ERA, 1.18 WHIP and has 43 strikeouts in 36 1/3 innings.  This will actually be Gallen’s first start with Arizona since being acquired from Miami.

Against Vargas, there are a handful of Diamondbacks who have had success.  David Peralta is 1 for 1 with a home run, Alex Avila is hitting .273 with a homer, and Adam Jones is 3 for 8 with a home run.  In 12 at-bats, Eduardo Escobar also has three hits off of the lefty.

While I don’t think Gallen is a dominant pitcher, I am really not a fan of Vargas as he has screamed inconsistency throughout his career.  Additionally, I think Gallen will get a boost by the fact that no one on the Phillies has faced him before.  This one is close enough that I wouldn’t blame you if you wanted to take Philadelphia and the favorable moneyline, but for my money, I am taking Arizona at -136 in this one.