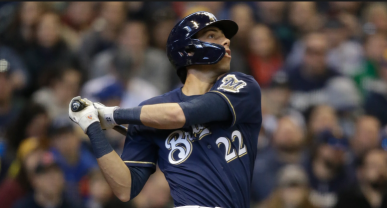 Thus far, the Chicago Cubs and Milwaukee Brewers could not have more different starts to this 2019 season. For the Cubs, they are off to a miserable 1-5 start and seem to have questions in just about every facet of the game. Their pitching staff, particularly their bullpen has been suspect, their offense has been inconsistent, and there are already people calling for coach Joe Maddon’s head. Their struggles were out in full force on Thursday when they lost to the Atlanta Braves, 6-4. Jon Lester had pitched well, going 6 innings and allowing just 2 runs, but their bullpen allowed the game to slip away as they gave up 4 runs in the 8thinning.

For the Milwaukee Brewers, they are off to a comfortable 6-1 start and seem to be cruising. Christian Yellich is crushing the ball, and their pitching has been lights out thus far. Even when their bats went dormant on Wednesday, the pitching staff picked them up as Freddy Peralta twirled 8 mesmerizing innings of 2-hit ball while striking out 11 against the Cincinnati Reds. The Cubs and the Brewers are set to square off for a 3-game series starting on Friday with first pitch scheduled for 8:10 pm ET from Miller Park in Milwaukee.

The moneyline for Friday’s game is set at the Chicago Cubs +108 and the Milwaukee Brewers -118. The over/under on runs scored is set at 8.5.

Cubs Trying To Find Any Sort Of Consistency They Can

It has not been a pretty start to the season for the Chicago Cubs. Since winning the first game of the season in Arlington against the Texas Rangers, they have dropped 5 straight games, including getting swept at the hands of the Atlanta Braves. They have seen their starters and bullpen both implode at times and are hoping for some kind of consistency in the pitching department. Enter Jose Quintana (0-0, 0.00 ERA). The lefty is hoping to break the losing streak for the Cubs but has to face a dangerous Milwaukee lineup, one that got Wednesday off, to do so. Quintana will be making his first start of the season, although he did pitch four innings in relief during their game last Saturday against the Rangers. He has pitched pretty well in his career at Miller Park (1.55 career ERA) but will be facing a loaded lineup on Friday.

Of the regulars, Wilson Contreras has done the best out of the gates so far for the Cubs. On the season, he is hitting .33/.500/.647 with 2 doubles, a home run, 4 runs batted in and 4 runs scored. Javier Baez leads the team in home runs with 3 (to go along with 7 runs batted in and 6 runs scored), while both Kyle Schwarber and Anthony Rizzo have 2 home runs. Kris Bryant, who the Cubs were hoping would have a bounce-back season, is hitting just .200/.310/.400 with 1 home run through the first 6 games.

Brewers Trying To Load Up On W’s

If last season proved anything, it is that every win matters. Given that last year’s NL Central pennant wasn’t decided until the 163rd game of the season, the Brewers would love to get every win that they can, especially against the Chicago Cubs. To do so, they will be sending out Brandon Woodruff (1-0, 3.60 ERA) to try to take care of business. In his first outing, Woodruff went 5 innings, allowing 6 hits and 2 earned runs in a 4-2 win over the St. Louis Cardinals. He walked one while striking out 5. No Cub has too big of a sample size against Woodruff, so it is tough to say that there is anyone who hits well off of him, although Daniel Descalso does have a home run and 2 runs batted in.

Offensively, what more can you say about Christian Yellich than that he is an MVP? If his NL MVP season wasn’t enough last year, he started this year off with four straight games with home runs. On the season, Yellich is batting .375/.531/.1.000 with a 1.531 OPS. He has 4 home runs, 8 runs batted in, 8 walks, 3 doubles, and 7 runs scored. In fact, the only person who is hitting better is….Brandon Woodruff, who went 2 for 2 in his first game. Lorenzo Cain is also hitting well, hitting .320/.414/.400 and Mike Moustakas has also added 2 home runs. Needless to say, Milwaukee is a tough team to beat as they seem to be clicking on most facets of the game.

Taking Woodruff and the Brewers

Honestly, this one is less about how well the Brewers have been playing and more about how atrocious the Cubs have been playing. At this point, with their inconsistent play, I just don’t want any part of the action on the Cubs right now, unless it is betting against them. Even though Jose Quintana threw respectably in his first outing, I am just not sold that their bullpen could hold a lead. For the Brewers, on the other hand, if Woodruff can give them a solid outing, a bullpen led by Josh Hader and company is a scary proposition to bet against. For my money, I am taking the Brew Crew at -118.