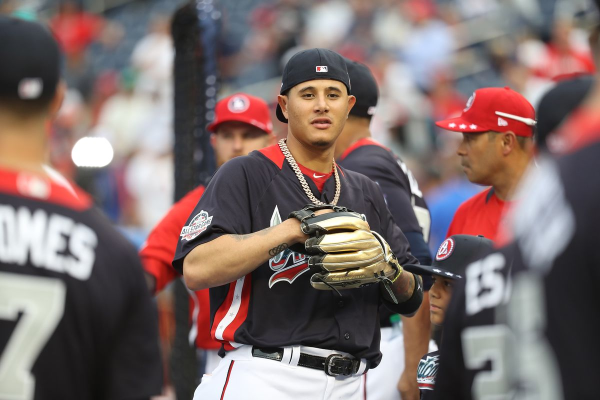 It may have been the week of the all-star break, but there was a lot going on in the baseball world over the past seven days. Let’s try to play catchup.

All-star weekend got started with the Cardinals firing manager Mike Matheny. It was a bit of a surprise with Matheny under contract for a couple more years and him having plenty of past success. However, the Cardinals are barely over .500 and struggling to keep up in the NL Central. MikeShildt is not the interim manager, and he will be tasked with jump-starting the Cardinals the second half of the season in order to avoid three straight seasons without going to the playoffs.

Bryce Harper won Monday’s Home Run Derby in front of the hometown fans in Washington, but the All-Star Game on Tuesday may have been the real home run derby. The American League won the game 8-6 in 10 innings with an all-star game record of 10 home runs being hit. There was only one run in the game that wasn’t scored via the long ball, and it came in the form of a 10th inning sacrifice fly.

One day after representing the Orioles in the All-Star Game, Manny Machado was officially a member of the Los Angeles Dodgers.The Dodgers beat out the Phillies, Brewers, and a handful of other teams in order to land the biggest fish on the trade market this summer. Los Angeles parted with five prospects, including Yusniel Diaz, a consensus top-100 prospect, in order to get Machado for the rest of the season. It was a steep price to pay for a rental player, but it likely makes the Dodgers the team to beat in the NationalLeague.

The Cleveland Indians also pulled off a major trade during the all-star break, acquiring Brad Hand and Adam Cimber from the Padres for prized prospect Francisco Mejia. The Cleveland bullpen has been one of the worst in the American League this season, a drastic change in fortune from the past couple of years. If the Indians have any hope of making noise in the playoffs, they need to get their bullpen straightened out. Hand and Cimber should both provide good support for closer Cody Allen. Meanwhile, the Indians are also waiting for Andrew Miller to come back from the DL, preferably in good health. As for the Padres, with Mejia, the top catching prospect in baseball, they now have 10 of the top-100 prospects, according to MLB.com.

For the second time this season, the Chicago Cubs have lost closer Brandon Morrow to the DL. Morrow is out with Biceps inflammation, although he says the injury is nothing major and should go away with rest. The Cubs figure to be in a fight with the Brewers for the top spot in the NL Central the rest of the season, so any time without their closer could hurt them. That’s part of the reason why they were so quick to acquire Jesse Chavez in a trade with Texas. Chavez has experience as both a starter and reliever, but he’s spent all of 2018 with the Rangers in the bullpen, posting a 3.51 ERA. It’s not a major upgrade but Chavez should prove useful the second half of the season.

There are a few more injuries this week that will have an impact on the trade deadline. For instance, the Tigers placed MichaelFulmer on the 10-day DL, which will likely eliminate any chance he’s dealt before the deadline. Rays catcher Wilson Ramos will also start the second half of the season on the DL, which could complicate a potential trade, as he was likely to go. The Red Sox are also dealing with what has been described as a rather “serious” ankle injury for Eduardo Rodriguez. That injury will likely push the Red Sox to trade for a starter, even with Drew Pomeranz set to return from the DL next week.

Ace in Your Face

The Nationals were excited to welcome StephenStrasburg back from the DL on Friday, but things did not go as planned. Strasburg gave up six runs over 4.2 innings during the team’s loss to the Braves. After Strasburg was pulled, he and Max Scherzer had a conversation in the dugout that gradually grew heated. When Strasburg retreated down the stairs to the clubhouse, Scherzer followed. The two later had a meeting together with manager Dave Martinez. The skipper said the matter had been resolved. However, the altercation clearly exemplifies how frustrated the Nationals are this season, as they dropped below .500 with Friday’s loss.