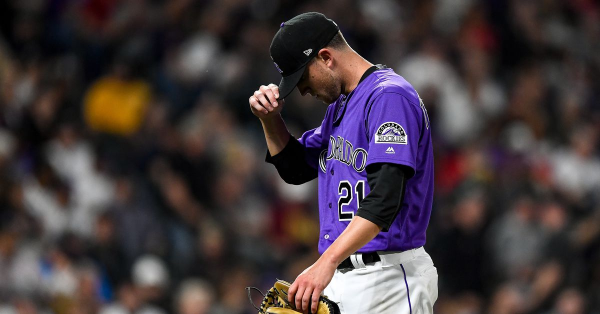 Thursday night features an NL West showdown when the Colorado Rockies (3-9) travel to AT&T Park to take on the San Francisco Giants (4-9). For the Rockies, after being swept by the Atlanta Braves in a short two-game series, they enjoyed the day off on Wednesday ahead of the four-game series with the Giants. Hoping to bounce back, they will look to Jon Gray (0-2, 5.68) to snap the losing skid. For the Giants, they lost 2 of their last 3 to the San Diego Padres, including a 3-1 loss on Wednesday. Hoping to get them heading in the right direction, they will give the ball to righty Jeff Samardzija (0-0, 2.79 ERA). First pitch for this contest is scheduled for 9:45 pm ET.

The moneyline for Thursday’s game is set at the Colorado Rockies -125 and the San Francisco Giants +105. The over/under for runs scored is set at 7.

Rockies Hope To Get Season Turned Around

After extending stars Nolan Arenado and German Marquez, there was a lot of optimism surrounding this Colorado ball club. Unfortunately, a slow start has dampened some of these thoughts, but they are still a very capable team of stringing wins together. Trying to set them on the right path will be Jon Gray. The fire baller is 0-2 with a 5.68 ERA and 1.26 WHIP. IN 12.2 innings, he has allowed 13 hits, 8 earned runs, and 2 home runs, but has only walked 3 while striking out 14. While the strikeout to walk ratio is good, the problem is that opposing batters are hitting .302 against him. In his last start, a 7-2 loss to the Dodgers, Gray went 6 innings, allowing 8 hits, 5 earned runs, and 2 walks, while striking out 4. He will look to rebound against San Francisco.

Offensively, their most consistent hitter in the early going, David Dahl, just landed on the injured list. Beyond him, Nolan Arenado and Charlie Blackmon have the best slash lines. Arenado is hitting .277/.314/.362 while Blackmon is hitting .273/.340/.386. While the averages are nice, the power hasn’t been there. Between the two, they have not hit a single home run and only have a combined 10 runs batted in. In fact, the whole team hasn’t hit for much power. The only player that has put up many home runs is Trevor Story, who has 4 home runs and 9 runs batted in but has also struck out 13 times. In his career against Samardzija, Story has a home run and 5 runs batted in while hitting .273 in 22 at bats.

Giants Looking For Wins At Home

It has not been the best start for the San Francisco Giants, but with the season still early, they will look to turn it around while playing at home. Leading the way for the Giants will be Jeff Samardzija. On the season, he is 0-0 with a 2.70 ERA and 1.45 WHIP in 2 starts. Over the course of 9.2 innings, he has allowed 9 hits, 3 earned runs, 5 walks, and 6 strikeouts. In his last outing, a 6-4 win over the Tampa Bay Rays, he went 4.2 innings, allowing 6 hits, 3 earned runs, 1 walk, and 4 strikeouts. He will look to improve on that pitching line Thursday.

Offensively, the Giants have a few players who have had success in their career against Gray. Brandon Belt is 3 for 12 with a home run, while Brandon Crawford, Kevin Pillar, and Yangervis Solarte are all hitting .333 or better (albeit in limited at-bats). On the young season, Brandon Crawford has had some success. He is hitting .289/.333/.333, but does not have a home run and only has one run batted into date. In fact, the power has been sorely lacking for the Giants, much like the Rockies. Brandon Belt is the only one with much pop as he has had 3 home runs and 8 runs batted in.

Toss Up, But Have To Believe Rockies Turn It Around

I can’t say that I love either side on this one. Both teams have been playing poorly, Thand the pitching on both sides isn’t exactly a matchup to salivate over. Still, when I look at the likes of Nolan Arenado, Charlie Blackmon and Trevor Story, I have to believe that the Rockies are a better team than they have shown. For the Giants, I am not sure they are much more than mediocre at best. With that in mind, I am going to take the Rockies in this one. I think the bats may finally come alive and the larger ballpark may help Jon Gray be more effective. I would understand if you took the Giants, or for that matter just stayed away from this one, but for my money, I am going with the Rockies at -125.