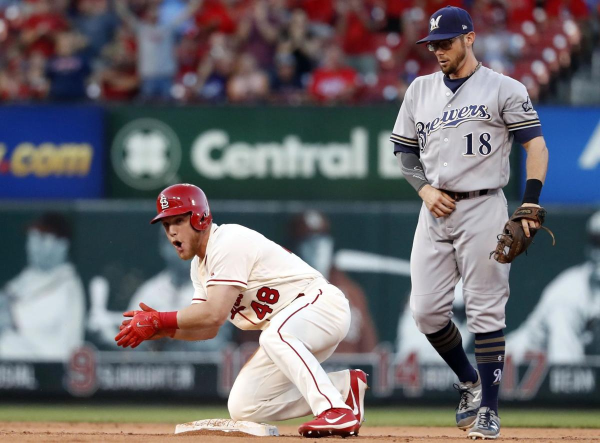 We can say one thing for a 60 game season, it definitely creates urgency. When MLB put together this schedule and expanded the playoffs to include 8 teams per league, games like this are exactly what they envisioned.

The Brewers and Cardinals will get together Saturday and both teams have everything on the line. The Cards simply need to win one game this weekend to ensure a postseason berth. Meantime, Milwaukee is hanging on by their fingernails. They need to win games over the weekend and get some help as they are jockeying with the Giants and Phillies for the final wildcard spot. Adam Wainwright goes for St. Louis while Milwaukee counters with Brandon Woodruff.

One of these bets is screaming for us to take it. Keep reading!

39 year old Wainwright is a crafty veteran. But that phrase, crafty veteran, has a translation…old. Wainwright has had a good year, going 5-2 with an ERA of 3.05, but his ERA has gone up each month this season, meaning he might be running out of gas. He did just throw a gem against these same Brewers 11 days ago, allowing 2 runs over 7 innings and getting the complete game win, but the rest of his September has been shaky.

Speaking of Out of Gas

These two teams might be leaking oil collectively. They’re in a marathon of make-ups because of the Cardinals COVID related delays earlier this year. In fact, the Cards are one of the few teams that will not get to 60 games this year. They’ll stop at 58 and just go by winning percentage for playoff purposes. They’re coming off a doubleheader yesterday and haven’t had a day off since Wednesday, September 9. Since then, yesterday was one of five doubleheaders for the birds. The Brewers have been the opponent in 3 of those double dips and they haven’t taken a day off since the 10th of September. So these teams are gassed. That affects everyone, but it mostly taxes a bullpen. That means: offense. The OVER is a HUGE play in this game, particularly with a number as juicy as 7.5. I could not love that number more.

Woodruff is the one guy who could spoil the run scoring party. He’s been on fire, allowing just 5 runs in his last 19 2/3 innings. He’s also 12 years younger than Wainwright, so the physical challenge of the last few weeks is less likely to affect him. He could tie the Cards up in knots and make it a pitchers duel, but I doubt it. He faced the Cards just last week and gave up 2 home runs. That’s another reason I love the over so much. These two teams have seen each other so often of late, all the batters are going to have a lot of recent knowledge on all the pitchers they face.

You know I like the over, and I also like the Cardinals. You get a little juice at +104, which is the way to go.

Avoid the run line where the price is too high for my taste with St. Louis. I could easily see a one run game here with all the tension attached. But I do feel good about the Cards. They have the veteran starter who’s been through the wars, they have home field, and they can play a lot looser. Again, the Cards have a lot to play for, but there is wiggle room. The Brewers know they HAVE to win or they’re headed home after the weekend.