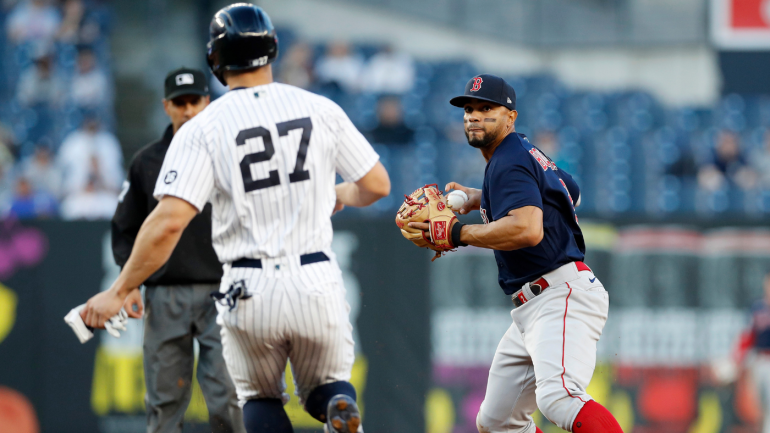 There is only one game on the MLB betting slate tonight as the second half of the MLB season begins. And it is a big-time matchup as well, as the Boston Red Sox and New York Yankees open a four-game series at Yankee Stadium.

Entering the season, the New York Yankees were the MLB betting favorite to win the AL East. They were also a popular bet to reach the World Series for the first time since 2009.

But they go into the second half eight games behind the Sox in the AL East, and they are 4.5 games behind the Oakland A’s for the second AL wild-card spot. However, they did end the first half with series wins over the Seattle Mariners and Houston Astros. Building off of that is imperative, but they have had only one period of sustained success thus far this season.

The Red Sox, meanwhile, were unfancied to start the season after finishing last in the AL East last season. But they enter the second half with one of MLB’s best records and a 1.5-game lead over the Tampa Bay Rays in the AL East. Will they prove that they are indeed a serious contender, or will the bubble burst?

We are going to be seeing a lot of this matchup over the next two weeks, so buckle up. These two teams face each other eight times in the next 11 days. Will the Yankees be able to make their way up the AL East standings? Or will the Red Sox increase the gap?

Red Sox vs Yankees odds are via FanDuel Sportsbook as of Thursday, July 15 at 12:55 pm ET. For MLB betting odds each day from a number of top online sportsbooks, check out our MLB odds.

Rodriguez, Red Sox Look to Remain Undefeated Against Yankees in 2021

The first Red Sox vs Yankees series of the season couldn’t have gone any better for the Red Sox. In early June, they swept the Yankees in a three-game set at Yankee Stadium, then repeated the feat three weeks later at Fenway Park.

Pitching has been the big question mark for the Red Sox, but they have pitched well against the Yankees. In six games, the Sox have allowed more than three runs only once. And on that occasion, the Yankees needed a late comeback and extra innings to hit the mark in a 6-5, 10-inning loss on June 6.

Rodriguez has had an up and down year after missing last season. In his first six starts, he was 5-0 with a 3.82 ERA. Since then, he is 1-5 with a 6.57 ERA in his last 11 starts. However, he has had some solid starts against some of the league’s better teams. Two weeks ago, he allowed only one hit in six shutout innings against the A’s, receiving a no-decision as the Red Sox won in 10 innings.

Rodriguez is only 2-4 in 10 career starts at Yankee Stadium, but this His lone win since May 7 came against the Yankees on June 27. In that outing at Fenway, he allowed only two runs and five hits and struck out eight in six innings in Boston’s 9-2 win. In his other start this season against the Yankees, he was decent, allowing three runs on five hits in 5.1 innings. And for what it’s worth, his ERA at Yankee Stadium (4.06) is actually lower than his career ERA at Fenway Park (4.10) and his career ERA on the road (4.30 ERA).

Can the Yankees Build From Their First-Half Finish?

The Yankees’ last game of the first half did not exactly go so well. They led the Astros 7-2 going into the bottom of the ninth but gave up six runs to lose 8-7.

While that was a pretty bad loss, the consolation is that they took the first two games in Houston. That is no small feat, given that the Astros had won six of seven before the series.

But to build off of their series wins over the Mariners and Astros, the Yankees will need to buck some trends. This season, the Yanks are 17-24 against AL East foes. They are 6-4 against the Baltimore Orioles, 6-6 against the Toronto Blue Jays, 5-8 against the Rays, and 0-6 against the Red Sox. 13 of those 24 losses are at Yankee Stadium, where they are 6-13 against their AL East rivals. Simply put, that is not good enough.

This could be a good night for Gleyber Torres to break out of his extended funk. He is 7 for 19 with a double, a triple, three homers, and nine RBI against Rodriguez. Since the start of June, Torres is hitting only .212 with one homer and 10 RBI in 113 at-bats.

Boston Red Sox ML: This is a good spot to back Rodriguez to pick up only his second road win of the season. The Red Sox are 21-10 against the AL East and have one of the league’s best road records. Look for that success to continue tonight.

Tonight, the most pivotal game of the 2022 NBA Eastern Conference finals takes place in Boston, with the Miami Heat taking a 2-1 series lead into their matchup with the Celtics. In Game 3 on Saturday, the Heat took control early, outscoring the Celtics 39-18 in the first quarter and leading by as many as END_OF_DOCUMENT_TOKEN_TO_BE_REPLACED