Betting Odds to win American League Rookie of the Year 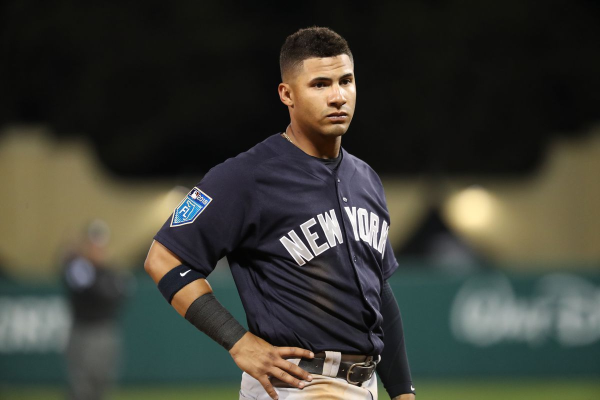 The Rookie of the Year contests are narrowing down in both leagues as the end of the season approaches. In the American League, we have a three-player race on our hands. Two of the three young’uns are still in a playoff race and teammates as well so we expect to see some solid finishes.

That is, if these guys can avoid hitting that dreaded rookie wall or, even worse, get shut down for the year. At the end of the day, this is definitely a group of sluggers first, however, they all have a wide set of skills. We even have one wild card in there for good measure.

Let’s see who the favorites are and if there’s any future MLB Rookie of the Year action with value in the American League.

This Yankees 2nd baseman came out of the gates hot when he was finally called up back in late April. The 21 year-old has shown all five tools during this rookie campaign and is everything the Yankees were hoping for when they acquired him from the Chicago Cubs a few years back. He was voted to his first All-Star team and was batting well over .300 while pounding dingers until a hip injury slowed him down and sent him to the DisabledList for a few weeks. Many may have simply given him the award already, however, since his return, it’s been more of a struggle. His power is absent and the strikeouts are way up over the past month. He is still batting a solid .265 with 18 homers and 53 RBI’s. A natural shortstop, his second base work has been top-notch and he may be moving over to short to cover for an injury to DidiGregorius. An all-around great player with plenty of potential and, at +200, Torres still has some value at the betting window as the obvious frontrunner. However, there are two players right behind him that could make things interesting.

This dual threat of pitcher-slash-slugger, Shoehei Ohtani, has had an interesting year. He had a tough spring training where he couldn’t seem to hit or pitch at all and everyone was labeling him an overrated bust. Then, once the season began, everything came together as he was pitching well and spraying the ball all over the field. Then everyone labeled him the future. It began on the mound. He started nine games for a 4-1 record in 49.1 innings, 61 strikeouts, a 3.10 ERA and a 1.14 WHIP. Great numbers for any pitcher and he’s been solid at the plate as well. He’s batting .268 with 13 home runs and 38 RBIs in limited time. And it’s that limited time that will hurt him in the ROY race. He’s seen the DL a few times and, while he has been available in the field and batting order, he hasn’t pitched in months. The Angels have had a tough season as they are a fourth-place team with an even .500 record so shutting down Ohtani is always an option. Which means that +350 is not the value we need with a futures bet. Ohtani will be interesting to watch for years to come but he won’t be the Rookie of the Year.

For some reason, Andujar finds himself a darkhorse in this race. But then again, he has been playing second fiddle to Torres for some time now as he’s been the Yankees 2nd best prospect since Gleyber’s arrival. His numbers are eye-popping, though. Batting .299. Slugging .530. OPSing .860. 20 homers and 65 RBIs seems like the kind of numbers that can guarantee a Rookie of the Year nod, yet here we are. In fact, the only thing Torres has over Andujar is WAR and it’s not by much. So how does a kid having this big of a year get ignored? He’s played in more games, hit better, fielded better, and been healthier. We’re not sure but we like his value here. The Yankees will be in a playoff push the rest of the year so it’ll be interesting to see if he can use that time to gather more attention for himself. His odds will be heading downward so grab them as soon as you can.

There is a look at the American League Rookie of the Year odds. Enjoy!