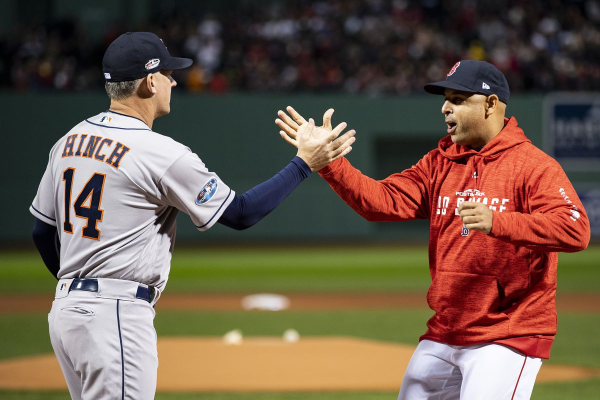 With a report released regarding the actions of the 2017 World Series Champion Houston Astros and cheating, the baseball and gambling worlds are abuzz with opinions about how best to manage the situation and the sport.

Remember the 2017 Houston Astros? A bunch of great players with great attitudes putting a baseball city on its back and dragging it to a long-awaited World Series Championship?

Well, this one hurt.

This week, a long-suspected cheating scandal was confirmed by a league investigation, and with is have come questions about the integrity in the sport, technology, and of course, gambling.

Back in 2014, in an attempt to assist the game with Instant Replay challenges of calls on the field, Major League Baseball installed several cameras in each stadium separate to the television feeds. One of these cameras is set in centerfield and points towards the catcher. Each stadium is equipped with a room that housed these video feeds, and members of the home team staff are given access to the camera angles and present them to the umpires when a call has been challenged.

While every stadium in the league has the same setup, in Houston, they decided to take advantage of the system by using the centerfield camera to steal signs and determine what pitch was going to be thrown before the batter needed to take a swing. The signals were originally sent by the video room to one of the coaches, Alex Cora, via a smartphone or a smartwatch. Cora could then alert the player of the pitch that was coming.

Finally, Cora asked to have a video review monitor installed in the dugout, eliminating the need for the video room to contact him. He could analyze the signs, then a batter was alerted by one of the players banging on a garbage can. Depending on the number of bangs, the batter knew what pitch was coming.

Many players argued that something must be going on, and during the investigation, the league even found incidences of pitcher stepping off the mound and letting the team know that he could hear what they were signaling.

Now, let’s be clear. There are rampant rumors of cheating around the league, including more teams than the Astros. But the Astros won 101 games and the World Series that year, which leaves some people wondering how they would have done if they had not been cheating.

Technically, sign stealing isn’t illegal. It is somewhat immoral…think of it as baseball’s version of counting cards in a casino. Teams have been looking at ways to tip pitches since the signal was first invented. That is why today, catchers and managers use a series of sophisticated signs and keys to try to throw off the scent.

The issue here is the use of technology to gain the advantage. It got so bad after the 2017 season that Joe Torre, who now works at the League office, issued a memorandum to all teams warning them to stop using technology to steal signs. In late 2018, a whistleblower came forward from the Houston organization, and the investigation began.

The League takes action…sort of?

After the investigation, the league decided to hand out punishment that it considered severe. The Astros were fined 5 Million Dollars for their part in the cheating, and have to forfeit first and second-round picks in the next two drafts. The General Manager and Manager of the team were suspended for a year, then subsequently fired by the owner of the Astros. Alex Cora, now the manager of the Boston Red Sox, was recently let go of his position in advance of what is assumed would be punishment.

However, does this punishment fit the crime? Apparently, there was not enough evidence to be able to punish any of the players who may have been involved. It would be assumed that some, if not all, of the players knew something about the scheme, especially those who were at bat receiving the signals from their bench. The league’s decision to not suspend or fine any of the players for a scandal bigger than anything since the steroid issue and the 1919 Black Sox cheating scandal leaves a lot of people in baseball and out scratching their heads.

A call for Integrity, but does that equal an Integrity Fee?

From the gambling industry’s perspective, this incident does bring up the discussion about the integrity of sports. However, this is far different than what the league itself has been asking for, which is a cut from all the bets placed paid to them as an Integrity Fee. Initially, this fee was to create a task force of sorts that would try to keep gambling out of the game. Now, in light of this cheating scandal, which did not seem to be gambling-related at all, the League will no doubt cry out for money to help fix the problem. This is, however, NOT a problem because of gambling, and the sports betting industry should stand firm on their decision to not hand over a percentage of their handle to the league.

Like a bad rash, every time there is something bad happening in baseball, it seem Pete Rose comes back. This time, however, the League’s all-time hits leader may have a point. He believes that the players involved have committed a crime far worse than his (he bet on baseball, specifically his team, while he was a manager back in the 80s). While he has been prohibited from being enshrined in the Hall of Fame and relegated to signing autographs for cash in Las Vegas, some of these players involved may very well end up heading to Cooperstown themselves. If they are allowed in, shouldn’t Rose?

Gamblers will tell you that what Rose did wrong wasn’t the betting on the games, it was getting caught. The sports betting industry will keep a close eye on what further action is taken against teams and players for using technology to cheat, but just like Rose, the only ones that will pay the price are the ones who are stupid enough to be caught.