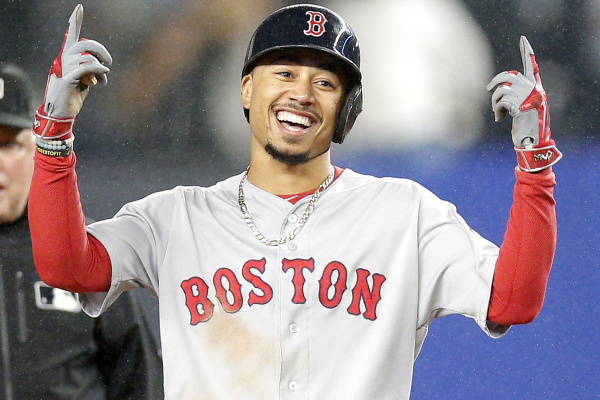 The American League playoff roster is set. This year’s playoff crop will consist of the Boston Red Sox, New York Yankees, Houston Astros, Oakland Athletics and Cleveland Indians. Unlike the National League, the only question that still has to be answered is who will host the wild-card game.

With three games left to play, the Yankees hold a two-game advantage for the first wild card spot over the Athletics. It feels only right then that the Yankees (98-61) will have to travel to Fenway Park to take on their archrivals in the Red Sox (107-52) to secure home field advantage for the wild-card game.

It will be interesting to see if the RedSox try to rest some of their players in the final weekend, but they still aren’t going to hand anything to the Yanks. To help their own cause, the Yankees will send J.A. Happ (16-6, 3.57 ERA) to the mound to square off with Brian Johnson (4-4, 4.11 ERA) of the Red Sox. First pitch is scheduled for 7:10 pm ET.

The moneyline for Wednesday night’s game is set at the New York Yankees -125 and the Boston Red Sox +105. The over/under on total runs scored stands at 9.

Yankees Trying To Get Rolling Heading Into Playoffs

After taking 3 of 4 from the Rays, including a 12-1 win on Thursday, the Yankees are hoping to get hot as they head into the playoffs. They will turn to J.A. Happ on Friday to keep their winning ways going. Since being traded to the Yankees, Happ is 6-0 with a 2.34 ERA, 1.06 WHIP and opponents are hitting .221 against him. In 57.2 innings in New York, he has 56 strikeouts, 14 walks and has allowed 9 home runs. In his last outing, a 6-3 loss to the Orioles, Happ went 5 innings giving up 1 earned run and striking out 7.

On the offensive side, LukeVoit has been a ton over the last month. In that time he is hitting .322/.404/.690 with a 1.094 OPS. In those 30 days he has 9 home runs, 21 runs batted in and 20 runs scored. Acquired from the St. Louis Cardinals at the trade deadline, Voit has been really solid since putting on the pinstripes. With 12 players having hit double-digit home runs, this is a lineup that not many pitching staffs will want to see in the postseason.

The Red Sox have absolutely dominated the regular season. With the possibility of getting to 110 wins if they sweep the Yankees, they have been dominant, but that isn’t to say they are unbeatable. There bullpen has shown cracks as of late, especially trying to find a setup guy to get to Craig Kimbrel. On top of that, they need Chris Sale to be healthy and the other starters to pitch to a high level in the postseason. Still, that offense is even more intimidating than the Yankees.

Starting for the Red Sox on Friday will be Brian Johnson. On the season he is 4-4 with a 4.11 ERA, 1.42 WHIP and opponents are hitting .264 against him. In 96.1 innings, he has 85 strikeouts, 36 walks and has also allowed 15 home runs. That last stat is a little scary. With the power of the Yankees, Johnson will need to try to keep the ball in the yard.

Yankees Pick Up Game One

I definitely prefer JAHapp over Brian Johnson from a pitching side of things, but I have a hard time not taking the team with the best record in baseball as underdogs. With an off day Thursday, I don’t think they will be focused on getting starters rest, so I think you will see a regular starting lineup. Between Johnson and their bullpen, they may have to outslug the Yankees to win, but they are definitely capable of doing that. I am taking the Red Sox at +105 in this one.