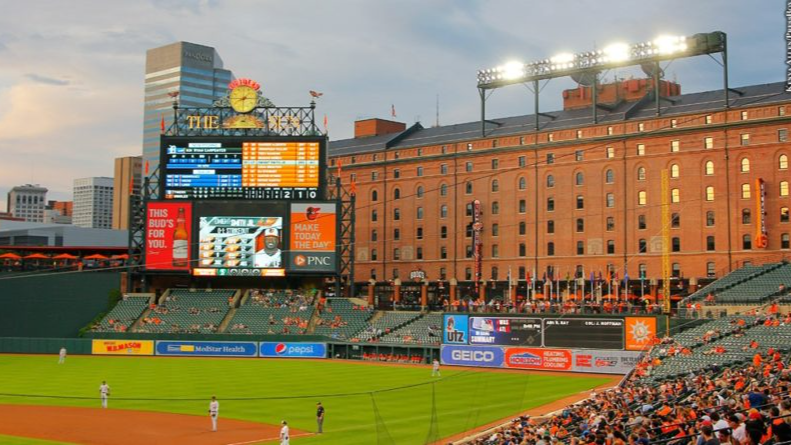 The Baltimore Orioles and the Baltimore Ravens are not satisfied with the direction of legislation in the state’s sports betting universe.

Major League Baseball’s Washington Nationals hold an advantage over the NFL’s Ravens and MLB’s Orioles because of an agreement with BetMGM. Under that deal, the Nationals are able to host sports-betting activity year-round.

The Orioles and Ravens are urging change in a bill that would relegate them to only game days for their wagering constituents.

This month, the Maryland Senate continues work on how to allocate sports betting licenses to teams, casinos and racetracks, with a House of Delegates bill currently in play.

The Orioles wrote that the legislation puts them and the Ravens at a disadvantage “as compared with casinos and racetracks — or other professional sports teams in other states,” in a statement submitted last week to the Senate Budget and Taxation Committee.

Soon, the committee will be considering the legislation, approved by the House on March 11, allowing in-person sports betting at casinos and tracks, as well as at the Orioles’, Ravens’ and Washington Football Team’s stadiums.

The sticking point is that the stadiums would be permitted to offer wagering only on game days or during special events.

In a Baltimore Sun story, the Orioles’ and Ravens’ landlord argued this would lead to a competitive problem among the teams’ peers.

Thomas Kelso, chairman of the Maryland Stadium Authority, wrote that limiting betting in that way “is just one more reason why the teams that play in a smaller sports market like ours cannot compete with teams in larger markets which could certainly affect the long-term viability of the teams that play in the Camden Yards Sports Complex” in testimony to the panel.

The Nationals’ deal says it can offer a year-round, “brick and mortar” sportsbook which may be open this summer. Bettors also will be able to bet on a mobile app in and around the stadium.

The Washington Football Team has a Virginia permit for online sports betting that is already up and running in conjunction with FanDuel.

Under the Maryland legislation, if the Orioles and Ravens receive a sportsbook license, they still would need to apply for a mobile license. The Orioles want brick and mortar license holders to automatically be permitted a betting app, saying “consumers prefer mobile betting,” according to a team position paper submitted to the Maryland Senate and obtained by the Sun, which wrote:

The Ravens’ position is more nuanced. The NFL team is requesting it be given the same sports betting opportunities as any other Maryland club, including the Washington Football Team, according to two sources familiar with the team’s thinking. They spoke on condition of anonymity because the Ravens have not released an official sports betting statement.

The competitive disadvantage argument is real: The Orioles and Ravens play in stadiums within 40 miles of D.C. competitors.

If approved, the year-round, in-person betting would help to populate the area – even on non-game days — around the Orioles’ home, Camden Yards, and the Ravens’ home, M&T Bank Stadium.

Kelso, in his testimony, added he seeks “to evolve the Camden Yards complex into a live, work, play environment very similar to those that exist in Atlanta, St. Louis, Arlington, Texas, Los Angeles, and those planned in Seattle, Boston, Denver, and other cities. Sports gaming is an entertainment option, compatible with sports whether it is live, broadcast on television or radio, or livestreamed digitally.”

The Sun reports that the proposal means the state’s six casinos; Laurel Park racetrack; the state fairgrounds; and Riverboat on the Potomac, an off-track betting facility on the Potomac River, would be able to conduct in-person sports wagering.

Operators offering on-site betting also would be eligible to apply for mobile wagering.

New Jersey continues to provide a high-level barometer for the sports-betting progress in the U.S.

The Garden State endured the typical down month that every February generally brings, but showed a slight increase over February 2020.

New York is moving – slowly – toward legalized sports betting and should bring stiff competition to New Jersey, perhaps as early as late summer, but New Jersey has a big head start.

The state, with three straight months over $900 million, saw a 22% drop in February.

In terms of sportsbook operators, FanDuel continues to lead at the Meadowlands, pulling in $27.2 million in revenue.

Resorts Digital, which is partnered with DraftKings and Fox Bet, was next with $7.7 million.

BetMGM was third with $5 million in revenue.

Louisiana Trying to Give the People What They Want

Voters in Louisiana, a state known for its rabid sports fans, want sports betting in a big way.

State lawmakers will move toward giving the people what they want during their upcoming legislative session, discussing what regulations, guidelines and taxes should be including on the wagering proposals.

Senate President Page Cortez, who will sponsor the bill setting up rules for betting on live-action sports games, underscored the importance of including mobile apps.

Cortez estimated the state could see up to $20 million a year from taxes on sports betting but cautioned “meaningful revenue” will come only with legal sports betting through mobile apps, in addition to casinos and other existing gambling sites in the state.

Cortez also said in an Associated Press story that he would prefer sports betting tax dollars went to general tax collection rather than to specific programs. The Senate president spoke Wednesday at a legislative leadership conference sponsored by policy group Ellevate Louisiana.

A landslide of voters — 55 of Louisiana’s 64 parishes – approved the plan for legalize sports wagering.

The next legislative session begins April 12 and items to be discussed include which live action sports games will be allowed, how much tax will be levied and where the wagers can happen.