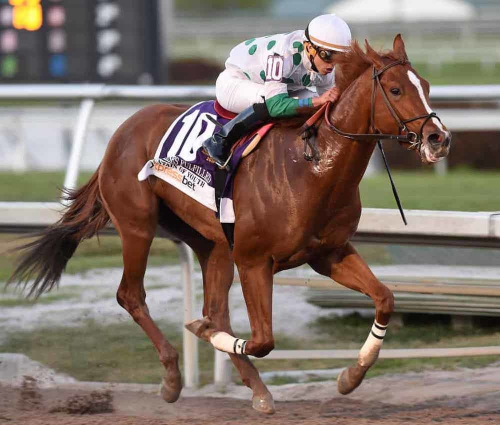 UPDATE 4PM EST:No changes are announced so the picks stand.

One of the major prep races for the Kentucky Derby is run today at Gulfstream Park: the 2019 Fountain of Youth.

Today’s contenders will hope to reverse the trend but on paper this is not the strongest field ever. This is underlined by the fact that the morning line odds favorite is the least experienced horse in the field…

The favorite has raced only once and though he destroyed his competition, it was in a Maiden race so not super high class. He did score a massive Beyer Speed Figure but given that it was on a sealed track on a rainy day, it is not sure that the figure is reliable either.

Moreover, the Gulfstream Park route races have been mostly won by horses closing fast and the favourite will probably try to gun for the lead, along with many others in the field. Pace handicapping therefore tends to indicate that the favorite is in danger here…

With so much uncertainty on the favorite in this race for still young horses, there are good betting opportunities for the bold.

Analysis and picks for the 13th race at Gulfstream Park on March 2 2019:

Number 1, CODE OF HONOUR won an easy race in his debut last year but has failed to progress further so far in his career. He has not been racing a lot, but his few races have not been particularly engaging. There is the possibility that his in-form trainer was aiming for this race for a while and the recent workouts by CODE OF HONOUR are pretty impressive. CODE OF HONOUR appears to have some closing speed as he showed in the Champagne stake last year and maybe the longer race distance will help him further. Not impossible for a podium but he is not a major contender in my view.

Number 2 EPIC DREAMER was pushed hard to the lead in his last race and faltered in the stretch. The issue is that he will most likely will try for the lead again and will face even stiffer competition for it today. His trainer has been doing well this week, but I think that the pace situation and class will not help EPIC DREAMER. He should be part of the pace war early and then fade away.

Number 3, GLADIATOR KING is another speedy horse who will fight for the lead and create too hot a pace to sustain. He last raced only a week ago so his participation in today’s Fountain of Youth would be titillating if he was not under the stewardship of a rather poor trainer who might be just shooting darts aimlessly. GLADIATOR KING is unlikely to last to the finish line, but he will make it difficult for the others trying to take the lead before the stretch.

Number 4, BOURBON WAR started racing late in his two years old campaign but won right away before going nowhere in the Remsen Grade 2. That was raced at Aqueduct which tends to favor inside speed which is the opposite of what BOURBON WAR likes to do. All in all, it was not a bad race and he came back last month to win easily, albeit at a lesser class level. BOURBON WAR has the right running style for this race I believe and should go off at relatively high odds. I believe that he will be a very good bet.

Number 5 VEKOMA is coming back after sitting out the dead of the winter. It might be strategy, or it might be health, who knows? The recent workouts are decent but not great so do with that info as you please… The trainer is not known for his success at the higher-class echelons, so it does not sound like the extended vacation was a ploy to get VEKOMA ready… If he is fit, VEKOMA has a solid chance as he has shown ability to sit behind the pace and overtake everyone in the stretch. This would be a winning strategy I believe. On paper, VEKOMA has a chance but the lack of recent racing and mild workouts are not very encouraging. I will include him in exotic tickets but will pass on the win bet.

Number 6, SIGNALMAN is another one with a long layoff but at least his workouts are looking good. SIGNALMAN has also demonstrated ability to win on the distance at this same class level, so he is definitely a contender. The pace situation should work in his favor as well. The trainer has rested another horse in the same manner before winning at the class level this year so this should signal that SIGNALMAN is primed and ready. He is a good bet at good value today.

Number 7, HIDDEN SCROLL is the morning line odds favorite, entirely on the back off his romp of a lesser field last month. Sure, this was a terrific Beyer Speed Figure performance but given that the track was sealed, maybe the figure is inaccurate… It was moreover won wire to wire with little pressure and these are not conditions that will be repeated today. HIDDEN SCROLL is a very shaky favorite and I will have no part of him. I expect that he will get in a pace war, in a poor racing position and will be overtaken by fast closing horses in the stretch.

Number 8, GLOBAL CAMPAIGN is unbeaten in a career entirely run here at Gulfstream Park. The two races were run at a lower class, but he did win at this distance in the last one, so it is an interesting record. Unfortunately, GLOBAL CAMPAIGN won both after fighting for the lead and he will likely try to do the same here, albeit against stronger horses. This sounds like trouble and I expect GLOBAL CAMPAIGN to not last all the way to the finish line.

Number 9, EVERFAST has some of the best experience in the field, unfortunately he has failed to make much of an impression so far in his career. He was basically nowhere near the podium in the many graded stakes he took part in last year but did claim a very surprising second place in the Holy Bull grade 2 last month. The Pace was pretty suicidal then and he somewhat inherited the position behind another longshot winner. EVERFAST might have a similar pace situation brewing here so another massive surprise is not out of the question but on paper, he is not really a contender for the podium.

Number 10, FROSTED GRACE took three tries to win his maiden race and has failed to repeat the “performance” since. He is another horse who seemingly likes to go for the lead but so far, he has not been able to run very fast early in the races and there is some competition here… It seems very unlikely for FROSTED GRACE but maybe he can at least manage to setup the race for closers.

Number 11, UNION’S DESTINY has been working out well in preparation for this race, but it probably will be in vain. UNION’S DESTINY appears outmatched and the pace scenario and post position are not likely to help. Having come nowhere close to the kind of performance needed to win or place, I think we can safely disregard his chances today.

The favorite does not deserve such low odds in my opinion, but the betting public will probably be entranced by the tremendous speed figure that HIDDEN SCROLL pulled off in his only start.

I have strong doubts about the validity of this figure and I think that the pace scenario is not going to help him win today.

In my opinion, a couple of outsiders have a much better chance, at much more interesting odds.

BOURBON WAR might have hidden talents that can shine today. His only Grade 2 race was not bad all things considered and today he will get a race scenario much better suited for his racing style. At pretty high odds, I think that BOURBON WAR will be a great bet.

SIGNALMAN has been rested for a while, but it might be a good sign as the trainer pulled off the same trick last month in a similar situation. SIGNALMAN also has the racing style needed to win today and has demonstrated ability.

Behind these two value horses, I think that VEKOMA needs to be included in the exotic bets. He has not raced for a while and has not shown very good workouts recently so there are good reasons to be alarmed. But if VEKOMA is actually near form, he has a strong chance today. CODE OF HONOUR did not have the best of races in January, but he has shown some closing speed in the Champagne Stakes and that might come in handy for a place today.

To add value to the Superfecta, I will add number 9 EVERFAST. The pace scenario is similar to his last race where he placed a surprising second. If it unfolds the same way, it is not impossible for EVERFAST to take part in the finish but he is a longshot.