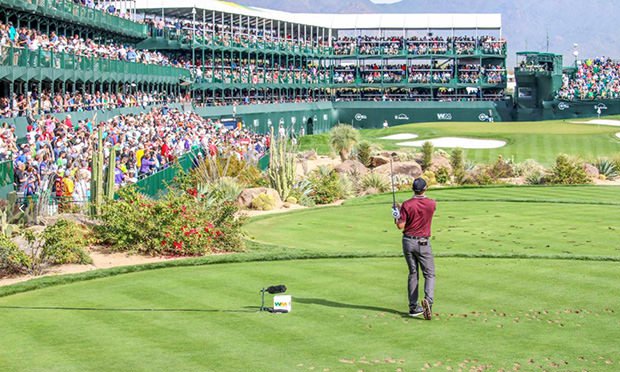 The PGA Tour heads to Phoenix, Arizona for one of the most popular events on their schedule, the Waste Management Phoenix Open.

If you don’t know which event this is off the top of your head you may remember it as the one that hosts what’s famously known as “the loudest hole in golf”. The par 3 16th hole has stadium seating built around it with tens of thousands of screaming fans piled into it. It’s truly one of the most unique experiences in golf.

Unfortunately, with the COVID-19 pandemic ongoing, we won’t see the same atmosphere as we do most seasons. The event is still allowing 5,000 spectators to attend, which is around 25% capacity so hopefully, we’ll still get a taste of the usual scene on the 16th.

Jon Rahm, who attended local Arizona State, is set as a sizable betting favorite at +650. Rory McIlroy is also in the field and will be competing in the event for the first time in his career.

Here are the top 10 golfers on the odds list at FanDuel:

How to Handicap the Waste Management Phoenix Open

TPC Scottsdale may be one of the more known golf courses among casual golfers, but it’s not exactly because of its breathtaking views or genius design. It’s a pretty straight forward par 71 measuring at 7,266 yards. There won’t be many tough decisions off the tee and while the course seems to slightly favor longer hitters, you can still keep it short off the tee and win the tournament as Webb Simpson proved last year.

Outside of statistics, past performance is a massive indicator this week. It seems to be that the same golfers year in and year out find themselves in contention at the Waste Management Phoenix Open. Notable past winners in the field include Hideki Matsuyama (twice), Rickie Fowler, Webb Simpson, Gary Woodland, and Brooks Koepka. Jon Rahm has yet to win the event but he’s never finished worse than 16th including a 5th place finish as an amateur in 2015. The Spaniard will be a local favorite and is set as a sizable favorite for good reason.

As previously mentioned, you can attack this course in several different ways off the tee. Distance helps, but it’s not absolutely necessary. Accuracy also helps, but the rough at TPC Scottsdale isn’t nearly as punishing as it was at Torrey Pines last week so those who miss fairways will still have a shot at the green on their second shot. For those reasons, looking at Ball Striking is a great idea for this week as it combines total driving with greens in regulation.

This truly is a course for iron players so considering strokes gained: approach the green is an absolute must. Some of the very best ball strikers on Tour have had major success at TPC Scottsdale including Webb Simpson, Rickie Fowler, and Hideki Matsuyama.

With it being a par 71 there’s one more par 4 than par 5 this week. It’s also important to note that six of the eleven par fours measure at less than 450 yards and a seventh measures at just 453 yards. Narrowing in on this 50-yard distance will give us a good idea of how golfers will play the par 4s.

Sand save % will be more important this week than past weeks and it shouldn’t be overlooked as every single green, except for the 1st hole, has at least one bunker surrounding it. At one point or another, golfers will have to get out of the beach to save par.

An underrated storyline from last week came from Xander Schauffele’s T2 finish. Yes, it’s not a win, but Torrey Pines is a course that Schauffele has historically struggled at, making the cut just once in his career. A T2 finish at a course that doesn’t match his style of play could be a sign of great things to come.

If you want to talk about a golfer who’s in good form, look no further than Schauffele. You have to go all the way back to August at the BMW Championship since the last time he’s finished outside the Top 20. In fact, he’s finished in the top 5 in five of his last seven starts.

Finally, Schauffele is 3rd in average strokes gained per round at TPC Scottsdale at +2.13 behind just Rahm and Matsuyama.

If you’re looking for a dark horse this week, Brendan Steele might be your guy. He’s found success at the event as he has gained an average of +1.67 strokes on the field per round at TPC Scottsdale which is 10th among all golfers in the field this week. He also has a T3 finish here in 2018.

Steele ranks T17th on the Tour in ball striking heading into this week. If there’s one weakness he has, it’s his putting where he ranks just 198th in strokes gained: putting. He enters the event coming off a T4 finish at the Sony Open and a T21 finish at The American Express.

After extending their hot and San Diego’s cold streak, the Seattle Mariners will be looking to leave Petco Park with a two-game sweep as they take on the Padres this afternoon. Yesterday, the Mariners pounded out a dozen hits and plated eight runs, and Chris Flexen pitched 6.2 shutout innings to collect his third straight END_OF_DOCUMENT_TOKEN_TO_BE_REPLACED