Will Anybody Beat Team USA? 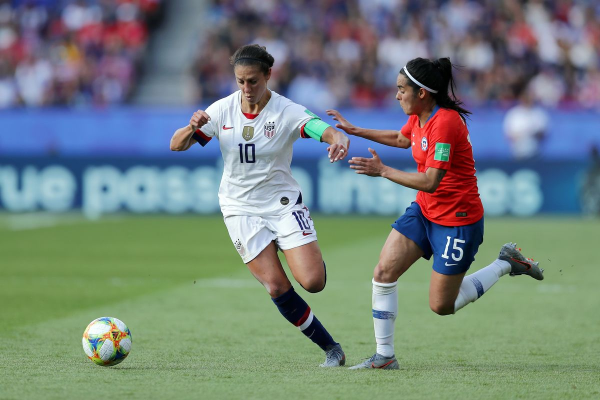 The ladies in red, white, and blue are rolling. Can anyone beat them?

After its most recent 3-0 victory over Chile, Team USA demonstrated, once again, that they are a force to be reckoned with on the soccer pitch. For gamblers and fans alike, Team USA is attracting lots of eyeballs. This year’s Women’s World Cup is attracting the most viewers in World Cup history, shattering prior records.

But as more gamblers enter the market, so too are bets on women’s soccer. In its opening destruction of Thailand, USA racked up 13 goals, a crushing and embarrassing defeat for the Thai women’s squad. But for gamblers, Team USA covered the 5.5 goal-line easily.

So with numerous non-stop victories going back months, will anyone in this year’s tournament beat Team USA?

Of its opponents thus far, Sweden at 1.5 goals on the goal line would be the “toughest” opponent Team USA will face thus far. After decimating the Thai women’s team 13-0, media around the world lambasted the American women for the unrelenting walloping they gave to the tournament’s biggest underdog in Thailand’s first-ever trip to the World Cup.

Mind you, Thailand was a team where their single goal scored against Sweden was enough to drive their team’s sideline to cry tears of joy. That’s how bad their team is. Sweden deftly handled the Thailand squad, conceding a single garbage time goal in the final minute of the match, but it shouldn’t be counted against them.

Against Sweden, Team USA will face the first team that will give them a legitimate test. Their match against Chile demonstrated Team USA’s ability to control the ball for the majority of the contest. At no time was Team USA remotely threatened, but against Sweden, they will be facing a squad that is capable of matching them in terms of offense and will be looking to put an effort against them.

Against the spread, Team USA is 1-1, and the totals in games they’ve played thus far are 1-1. While Sweden will give them a test, look for Team USA to take control and handle them easily. I like Team USA to get the job done 2-1.

To open the tournament, Team USA was listed as a +200 favorite to take the whole thing, making them the favorites to win the Cup from the onset. They’ve quickly set the pace as the team to beat, but while they are the undisputed favorites (and rightfully so), it is likely that Team USA will have some challenges ahead as they progress through the latter phases of the tournament.

Following Team USA, Team France is the next biggest favorite at about +350 to hoist the World Cup trophy. It should also be noted that aside from being the second most-favored team to win it all, France is also the host nation, giving them a decisive advantage with home-field advantage.

The French’s team’s male counterparts were able to take home the trophy in 2018, and if destiny has its way, perhaps the women’s team can make it 2-for-2 in World Cups for the French national teams. Unless France shows any more grit, it’s still unlikely they’ll be able to defeat the American women if they continue to play with this dominance.

After France, the dropoff of opponents in Team USA’s way is noticeable. Namely, Germany and England are the next biggest opponents, but in all likelihood, Team USA is a safe bet to go all the way and win back-to-back Women’s World Cups.