United States and Spain – Can the Americans Keep Rolling Along? 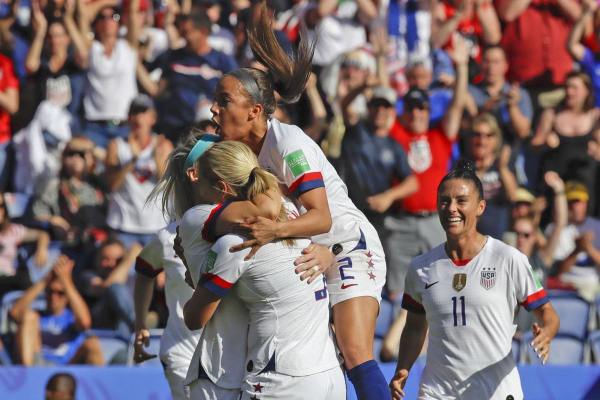 The ladies of Team USA look unstoppable—does that continue when they face Spain?

With a demolition of the Thai women’s team, a commanding 3-0 victory over the Chileans, and a confident cruising win over the Swedes, the ladies of Team USA have looked anything short of vulnerable. Throughout the entire tournament, they have shown precision passing, dominating and unrelenting pace of play, and a never-ending, nonstop offensive attack that has brought even the more-talented squads in their early group play to a standstill.

So what is going to happen when they play Spain on Monday afternoon? Short answer: there’s no doubt that the lady in red, white, and blue are going to continue their dominance.

One of the most outstanding aspects of Team USA is their ability to pass the ball and push the tempo ensuring that the other team is constantly on the defensive, rather than being able to mount a counterattack. In their tournament games thus far, the US has outscored opponents 17-0—also limiting teams to a very low amount of shots on goal.

In many games, the US easily could’ve pushed the goals scored far over the total (particularly in contests like against Chile and Sweden) but near-makes very close to the box resulted in corners and cross-attempts, most of which fatigued squads like Chile and Sweden to where their defensive personnel were completely exhausted and unable to prevent the inevitable onslaught.

While there have been instances where Team USA has been threatened, particularly in the Sweden game, very few teams are able to effectively pass the ball effectively against USA. A few turnovers resulted in quick offense on the other end for Team USA, and given their continual domination, there is no doubt that they are going to persistently ensure that the same measure of offense is executed against the Spanish squad.

Against their most recent opponents, USA has covered the goal-line in ever contest. Most recently, the books opened the Swedes as +1.5 underdogs on the goalline, but the USA girls easily smoked them, albeit by only a two-goal margin. Despite the lack of outright domination in their recent games on the scoring sheet, the fact is, simply watching USA play, the other squads are facing very limited opportunities on USA’s goalkeeper.

While the Swedes nearly converted on a turnover, USA’s goalkeeper made a routine save, ensuring any chance of a Swedish comeback would be quickly smothered. In their most recent contest, you can expect more of the same.

Spain’s upcoming test against Team USA will be their toughest encounter so far. They opened the tournament with a match against Brazil, which they battled to a one-goal victory, but fell to the English Lionesses at the same margin of 2-1. It would also be the same goal line and total that Team USA faced against Sweden, whom they also fell at a similar margin of 2-0.

In each and everyone one of their games thus far in the tournament, team USA has covered the goal line, but the total in two of their three contests—against Chile and Sweden—went under the total goals.

In this upcoming matchup, USA is a 1.5 goal favorite and the total is set at 2.5 goals. While teams have unable to get a breakthrough in recent contests, there is no doubt that USA’s potent offense in addition their stifling defense will make it very hard to fade them on the goal line or moneyline.

USA will continue to roll along unimpeded, and pay well on betting tickets everywhere.