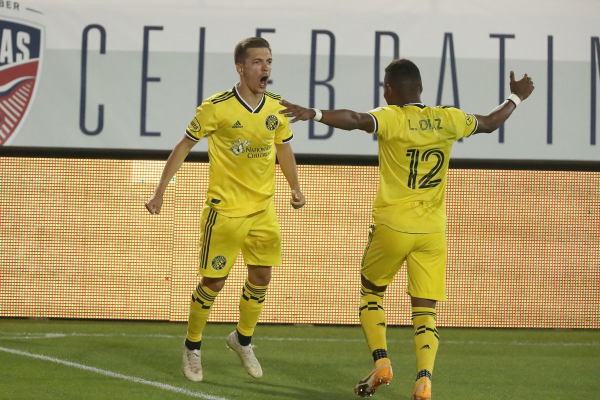 Daniel Rios and his teammates will travel to MAPFRE Stadium come Sunday, November 29, to face off with the Columbus Crew by 3:00 PM EST.

Columbus Crew is the favorite to win this game, according to FanDuel, with money line odds of +125, while the underdog Nashville SC has money line pegged at +190.

Columbus Crew on a Roller Coaster

Columbus Crew was well on their way to top the table when they were struck by injuries, which in turn led to poor performances that resulted in them winning just a match in seven appearances. Luckily for them, injured players returned to feature in the last three fixtures, securing two wins in favor of the Columbus Crew.

Striker Gyasi Zardes, who leads his team with 10 goals, was one of the players who returned to the open arms of manager Caleb Porter. Zardes got a goal against their last opponent, New York Red Bulls, at the 68th minute, after Pedro Santos netted a penalty kick at the 26th minute, and Darlington Nagbe got one too just a minute after the half time break. The game ended with Columbus Crew winning by a 3-2 scoreline. Zardes has scored a total of 79 goals, having played for 17,851 minutes in 198 starts. He averages 0.40 goals per 90 minutes over his career.

Columbus Crew leads the Major League Soccer in successful dribbles (66.5%), with a controlled possession of the ball for 52% of games played. They have had 88 shots on target out of 243 total shots made this season thus far, which results in a 36.2% shots on target percentage. Columbus Crew has a total of 34 goals scored this year. This ranks them in 8th position in the league. With 9,388 successfully executed passes out of 10,800 attempts made this season, which results in a receiving percentage of 86.9%.

Lucas Zelarayan plays a vital role in Columbus Crew, leading with 23 assists while scoring 0.30 goals every 90 minutes in his pro soccer career so far, having been in the starting lineup in 115 games. The Argentine has 34 goals scored in 10,204 minutes played.

Nashville SC in Desperate Need of a Comeback

Nashville SC comes into this game with a win over last year’s runner-up, Toronto FC, by a lone goal scored by Daniel Armando Rios in extra time, at the 108th minute. Momentum is with the 7th placed team, as Smith’s men will be raging for a comeback against the Columbus Crew for a defeat sustained in September this year.

Securing a playoff spot in their debut flight season is a huge achievement for this side. Defeating Inter Miami and Toronto in postseason games has them feeling like they could give any team a run for their money, and rightfully so.

We expect the Nashville SC to be victorious in this fixture over Columbus Crew, keeping their fairytale run intact.