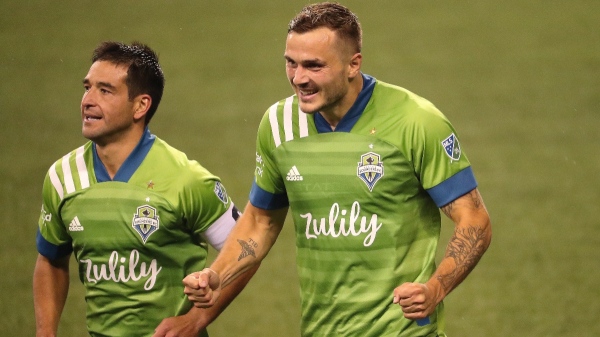 The MLS playoffs are often full of surprise results, and this year is no different. But one thing that has been a frequent sight in recent years is on the verge of happening again, as the Seattle Sounders are a win away from a fourth MLS Cup final appearance in five seasons.

The Sounders took home the title in 2016 and 2019 and are aiming to be the first side to repeat since the Los Angeles Galaxy in 2011 and 2012. To be able to move on to face the Eastern Conference champion Columbus Crew, the Sounders will have to see off Minnesota United in tonight’s Western Conference title tilt.

Seattle, the second seed out of the West, is the highest seed left in the postseason. In the East, the top two seeds, Philadelphia and Toronto, were both knocked out in the conference quarterfinals. In the West, top seed Sporting Kansas City fell victim to a first-half blitz by Minnesota in the conference semifinals last Thursday.

Will it be another Western Conference title for the Sounders, or will Minnesota United pull off another stunning result to reach their first MLS Cup final?

Sizing Up the Sounders

Seattle have reached this round by virtue of winning twice at home. In the conference quarterfinals, they saw off Los Angeles FC 3-1. Then in the conference semifinals last Tuesday, they edged FC Dallas 1-0.

The Sounders have gotten it done at both ends this season. They were tied for third in the league in goals with 44 in 22 matches, averaging exactly two goals per game in the regular season. Defensively, they were first in the Western Conference and fourth in the league in goals allowed per game at 1.05, surrendering only 23 goals.

The Sounders have two of the top scorers in the league in Raul Ruidiaz, who scored 12 goals, and Jordan Morris, who scored 10 goals. They also possess one of the league’s leading goal providers in Nicolas Lodeiro, who tied for the league lead in assists with ten. That trio was key to last year’s title run, and they have all scored already in this year’s playoffs.

A Look at Minnesota

Last year, Minnesota reached the playoffs for the first time in their brief MLS existence. Their stay was brief, however, as they fell to the Los Angeles Galaxy in the conference quarterfinals.

This year, they have stuck around a lot longer and are looking to go even further. After finishing fourth in the Western Conference for a second straight season, Adrian Heath’s side opened the postseason with a 3-0 home win over the Colorado Rapids. That was an impressive performance, but they outdid it against SKC, scoring three times in a little over 10 minutes, in the 27th, 35th, and 39th, in a shock 3-0 win to knock out the West’s number one.

Like Lodeiro did for Seattle in 2016, Minnesota have an Argentine attacker who’s made an instant splash after coming in during the season. Emanuel ‘Bebelo’ Reynoso has been an assist machine since his arrival and has assisted on all six of Minnesota’s postseason goals, becoming the first player in MLS Cup playoff history to have multiple three-assist performances.

Seattle and Minnesota have not met this season, but Seattle has dominated since Minnesota entered MLS in 2017. The Sounders have five wins and one draw in six head-to-head meetings and have won all three meetings at Lumen Field.

Seattle has been stellar at home this season, posting nine wins, two draws, and only one defeat between the regular season and postseason. In those games, they have scored 31 goals and allowed only 11. Since a 2-1 loss to Portland on September 6, the Sounders have seven wins and a draw at home, scoring 24 goals and allowing only six.

Minnesota’s win over Sporting Kansas City was especially stunning given their away form going into that game. Up to that point, their only win in a true road game since the season restarted was a last-minute 1-0 win in their last regular season road game against FC Cincinnati, the worst team in MLS. Prior to that win, Minnesota had four defeats and two draws in their six previous away matches.

Goals seem a likely outcome in this matchup. The over 2.5 goals mark has hit 17 times in 25 matches in domestic competitions for Seattle this season, while the mark has hit 19 times in Minnesota’s 26 matches, including five in a row.

Seattle to win and both teams to score (+185): Seattle’s shutout of FC Dallas was a rare one for the Sounders, who have a sound defensive record statically but have posted few clean sheets. That was only the seventh shutout for the Sounders in 25 matches across the regular season, the MLS Is Back tournament, and the postseason. +185 is sound odds if you are backing the Sounders to win in 90 minutes.

Minnesota United have every reason to be high on confidence heading into this game. They have posted two impressive wins, and Molino and Reynoso are in brilliant form.

However, the Sounders are in sight of a fourth MLS Cup final in five seasons for a reason. They know how to get it done at this time of year, and a number of players who have been a part of their success since 2016 are still leading the way. Back the home side to get it done again.

Tip: Seattle to win and over 2.5 goals