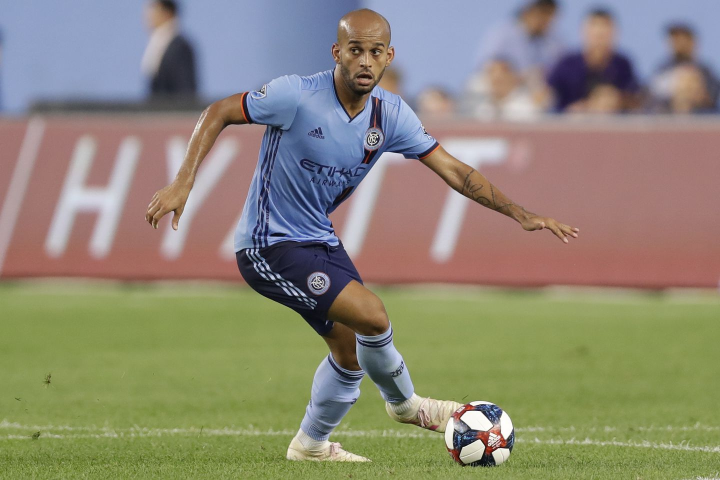 NYCFC is coming off back-to-back dropped points, with the most recent result being a 1-0 loss to Toronto FC on Wednesday. FC Cincinnati most recently played Wednesday in a nil-nil draw with the Philadelphia Union.

These teams faced off on Sept. 12, a match won 2-1 by NYCFC thanks to goals from Alexander Ring and Anton Tinnerholm, two unlikely sources of scoring. This is a breakdown of the betting possibilities for the NYCFC-FC Cincinnati rematch.

NYCFC is the heavy favorites on DraftKings Sportsbook, coming in at -215 on the moneyline, while a draw is +320 and an FC Cincinnati win is +575. On the surface, it makes sense – NYCFC just beat FC Cincinnati, a mere two weeks before this rematch

While squad rotation could come into play for NYCFC after playing Wednesday, their front man possibilities of Heber, Jesus Medina and Valentin Castellanos present a formidable duo or trio for their opponents. Combined with Sean Johnson in goal, NYCFC has talent at both ends of the pitch.

Not what it seemed

The first meeting between these teams was a 2-1 game – one-goal outcomes come in a variety of shapes and sizes. This one was a pretty even matchup.

NYCFC possessed the ball for 54 percent of the game while outshooting FC Cincinnati, 16-14. Both teams managed five shots on goal. NYCFC took a 2-0 lead early in the second half and FC Cincinnati’s answer came late, with their comeback try coming up just short.

The case for FC Cincinnati

Before we even consider the odds, there’s a case to be made for FC Cincinnati in this matchup. For starters, this is a team that has picked up points in its last two matches, a good sign for a young and developing group.

Beyond that, FC Cincinnati has steadily built itself up, from an expansion club with a lot of players from the USL into a team on the rise. It doesn’t show up consistently in results yet, but the talent is there. Jurgen Locadia came to FC Cincinnati from time spent in the Premier League. Frankie Amaya is a 19-year old phenom in the midfield. Joseph Claude-Gyau is super explosive, and Yuya Kubo is a top-notch footballer from Japan. This isn’t a team devoid of talent.

Adding up everything above, FC Cincinnati would be an appealing upset pick even if the line didn’t dictate a major difference in the sides. But the opportunity to pick FC Cincinnati on the DraftKings Sportsbook moneyline of +575 is remarkably tantalizing. We’re taking that FC Cincinnati moneyline pick. The chances of an upset here might be as high as 30 or 40 percent, which begs much closer odds between the two sides than that.

If we’re going all in on FC Cincinnati here, it’s worth looking at player props for this game, too. Locadia’s +1000 to score the game’s first goal is a bet worth placing, too.

The final bet we’ll place on this game for FC Cincinnati is on Haris Medunjanin to score the final goal. Medunjanin comes in at +3000 for that prop bet, and there’s a couple reasons to like it. First off, he scored directly off a corner kick two matches ago in the 85th minute to beat New York Red Bulls – late-game involvement on set pieces gives him an increased chance to score. Additionally, Medunjanin has made it the whole 90 minutes each of his last two times out, so he doesn’t carry tons of substitution risk ruining the ‘last goal’ bet.