Nashville Meets TFC as Underdog in First Ever Meeting Between Clubs 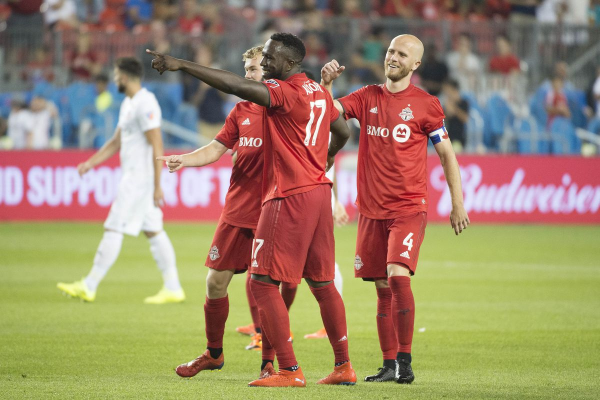 This playoff game is an interesting contrast of clubs. Toronto FC might not have been an original MLS franchise, but there are few clubs who have been more stable or successful over the last decade. They have played in three of the last four MLS Cups, ironically all against Seattle, winning a title in 2017.

TFC finished second in the Eastern Conference standings, with some late stumbles preventing them from capturing the Supporters Shield. This is a very good club, though their goal differential is nothing special. There is not much buzz for them coming into the playoffs due to the way they finished the season.

Nashville SC is in just its first season, joining MLS with Inter Miami this year. Amidst the craziness, Nashville finished 7th in the Eastern Conference. They squared off against Miami in a play-in round over the weekend. They had little trouble in the match, getting to a 2-0 lead in the first 30 minutes. They went on to win 3-0. They’ve already had a very successful first season and taking down TFC would only add to that.

There are a couple of things to note for this matchup. First, this game is being played in Hartford, Connecticut, the COVID-19 home of TFC. Second, these teams have never met before, the first time in MLS history that teams have played in the playoffs as the first match between two clubs.

TFC is the more established side, but they are not entering in great form having lost three of their last four. Their lone win was over Inter Miami who Nashville beat to advance. Toronto wants to play a possession game and perhaps that will work well as the more experienced team. They are strong playing with the lead, but their top goalkeeper, Alex Bono, is still out. Alejandro Pozuelo is one of the most creative players in the MLS and he has Ayo Akinolo and Jozy Altidore, young and old, to bury opportunities. Altidore, who often looks gimpy, has come up huge in the biggest moments in the past.

Even though Nashville netted three goals against Miami they have to be concerned with where the scoring comes from as they advance. They only scored 24 goals in 23 regular season matches. They conceded just 22, which was better than TFC, but it leaves a very thin margin to operate from. Nashville converts chances at a good rate but without top flight talent they just don’t create the way that other teams do.

It is a little too soon in their development to get a win like this. TFC outclasses them.

Though a great result, I am looking at Nashville’s 3-0 win over Inter Miami as an aberration. I know they scored 3 in their regular season finale win over Orlando too, but in the four games prior they scored either one or nil, which has been a common occurrence all season. For this one I am not confident that they even get on the score sheet. Toronto is great at getting that first goal thanks to players like Pozuelo and Akinolo. Once they do they are really good at shutting things down. TFC likely nets a second goal in the second half to cement the game.

After extending their hot and San Diego’s cold streak, the Seattle Mariners will be looking to leave Petco Park with a two-game sweep as they take on the Padres this afternoon. Yesterday, the Mariners pounded out a dozen hits and plated eight runs, and Chris Flexen pitched 6.2 shutout innings to collect his third straight END_OF_DOCUMENT_TOKEN_TO_BE_REPLACED