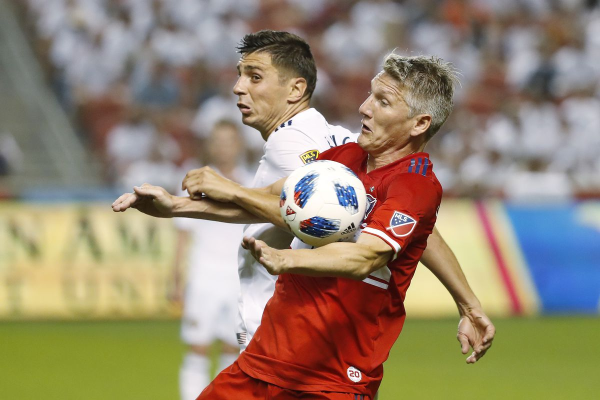 Even with the Gold Cup in full swing, the MLS season carries on full steam ahead. Saturday night brings us an inter-conference matchup between the Chicago Fire and Real Salt Lake. At home, the Fire is a heavy favorite at -181 while Salt Lake has a money line of +430. A draw is listed at +323.

Chicago enters Saturday’s game in poor form. They were bounced from the U.S. Open Cup by St. Louis FC in their last game and haven’t registered a win since May 11. They have two losses and two draws in their last four league games since that win, conceding 10 goals over that span, as they have fallen into a tie with Orlando for eighth in the Eastern Conference.

Things aren’t much better for Real Salt Lake, which is seventh in the Western Conference, taking 19 points out of 15 games. They were also knocked out of the Open Cup last week, dropping a 3-0 home game against LAFC. Prior to that, they were embarrassed by the New York Red Bulls 4-0. Those are disappointing results for any team, but especially for one that actually put together a three-game winning streak in May.

As mentioned, Real Salt Lake’s defensive form has been lacking recently, giving up seven goals in their last two games. In fact, they’ve allowed seven goals over their last three halves, as all four goals in their loss to the Red Bulls came in the second half. They have a competent goalkeeper in Nick Rimando, but the veteran shot-stopper is helpless if the players in front of him can’t do better.

If Real can get more of the ball, they have some promising players on the attack. Sam Johnson has shown some promise on the attack, while Sebastian Saucedo and Corey Baird are both dangerous players in open space. But winning balls in the midfield and unleashing their attacking players has been part of the problem lately, and one Salt Lake will have to solve when they visit Chicago.

As for the Fire, they’ve had no problem generating scoring opportunities this season; they just haven’t finished their chances. CJ Sapong hasn’t quite found the same kind of scoring touch he had in Philadelphia two seasons ago when he scored 16 goals in league play. Chicago has playmakers like Aleksander Katai Nico Gaitán who can get Sapong opportunities, but it’s up to him to finish them.

Against a struggling team like Real Salt Lake, it’ll be vital for the Fire to start fast and seize control of the game early. Chicago has some defensive issues, particularly on the left side, as we’ve seen in their recent games. Given their inability to finish their scoring chances, they don’t want to fall behind in this game. Once they score one goal, they should be able to add to their lead and close out the game given Salt Lake’s recent form.

Chicago has just one loss in eight home games this season, so there’s little reason to back Real Salt Lake pulling off the upset. Obviously, the Fire will need to find the back of the net at least once, but that seems like a good bet against Real’s defense. Bet on Chicago to beat Salt Lake on Saturday.