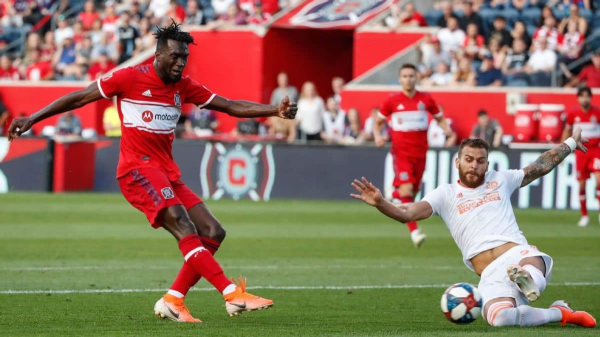 Midwest rivals in the making collide Saturday night when the Chicago Fire face FC Cincinnati. At home, Chicago is heavily favored with a moneyline of -312 compared to Cincinnati at +709. Meanwhile, a draw is listed at +430.

In their first MLS season, FC Cincinnati is having a hard time. They currently sit at the bottom of the Eastern Conference standings, winning just four of their 19 games this season. On the bright side, they are coming off a 3-2 win over Houston last time out. That win was preceded by a 7-1 loss to Minnesota, which was their sixth league loss in a row.

Things have only been slightly better for the Fire this year. They have taken just 22 points out of 20 games, which has them on the outside of a playoff spot heading into this weekend’s action. On the bright side, Chicago is one of four teams fighting for the final playoff spot in the Eastern Conference separated by just a single point heading into the weekend, so a win and favorable results elsewhere could send the Fire into playoff position.

More than anything, the Fire will be glad to be back at home this weekend. They’ve been dreadful on the road this season and were badly outplayed last time out against Sporting KC, getting outshot 17-6 and owning just 41% of the possession. However, Chicago has been far more reliable at home this season, going eight straight games without a loss on their home turf.

During those eight games, the Fire has found the back of the net 20 times, almost guaranteeing that they’ll score at least a goal or two on Saturday. At times, C.J. Sapong has been in great form, amassing eight goals on the season, while Nicolas Gaitan has been the playmaker with eight assists. Against an FC Cincinnati team that has allowed 44 goals this year, the Fire could be explosive offensively on Saturday night.

Cincinnati’s injuries have held them back to some extent this season. Jimmy McLaughlin has been missed since going down with an ACL injury, while Greg Garza and Fatai Alashe will both be unavailable for Saturday’s game. On the bright side, both Kendall Waston and Allan Cruz are back after international duty and made a difference in the team’s win over Houston last time out. Jamaica international Darren Mattocks will also be available to play Saturday.

Waston should provide a serious boost to a Cincinnati backline that needs all the help it can get. However, the return of Mattocks and Cruz may be more important. FCC is one of the worst offensive teams in the league. Both Mattocks and Cruz have two goals apiece this year, although no one on Cincy’s roster has more than three goals, so getting a couple of players back who have found the back of the net should be helpful.

While Chicago is a little vulnerable, Cincinnati’s road record can’t be ignored. The MLS newcomers have lost eight in a row away from home, allowing at least three goals in their last four away contests. That’s too much to overcome, so bet on Chicago to get the win on Saturday.