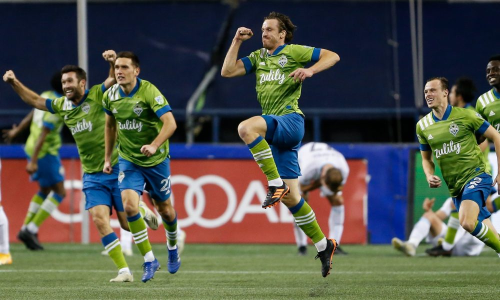 Enter your content hereAfter an action-packed season and a thrilling postseason, only one game remains in the 2020 MLS season. On one side, the reigning champion Seattle Sounders look to win a second straight title and a third in five seasons to secure their status as MLS’s current dynasty. On the other side, the Columbus Crew are aiming to win their first title since 2008.

The Crew finished third in the Eastern Conference and were the highest seed remaining on that side after the conference quarterfinals, which saw top seeds Philadelphia and Toronto both be knocked out. Their first trip to the MLS Cup final was booked last Sunday with a 1-0 win over eight seed New England, who had knocked off Philadelphia and fourth-seeded Orlando City on the road to reach the conference finals. Given that their showdown with the Sounders is in Columbus, it’s not a literal trip for the Crew, who haven’t had to leave home at all for the postseason due to the upsets elsewhere.

The Sounders, the second seed out of the Western Conference, also won three home games to score their fourth MLS Cup final spot in five seasons. It didn’t look like that would happen for much of their Western Conference final tilt against Minnesota United. But three goals in the final 15 minutes, including an 89th-minute tying goal and a 93rd-minute winner, overturned a 2-0 deficit and set off wild scenes at Lumen Field.

Will the Sounders be able to become the first team to repeat as champions since the Los Angeles Galaxy in 2011 and 2012? Or will the Crew give Columbus a title only a few short years after the city nearly lost the team?

Only two teams have won the MLS Cup three or more times, so a win for the Sounders would put them in elite company. The Los Angeles Galaxy lead the way with five titles, while D.C. United has won four titles.

In their three postseason wins over Los Angeles FC, FC Dallas, and Minnesota United, Seattle has scored seven goals and allowed four. The goals have come from six different sources, with Raul Ruidiaz being the only player with multiple goals. Ruidiaz leads the way for Seattle with 14 goals in all matches this season, and he scored the tying goal against Minnesota. In last year’s MLS Cup playoffs, Ruidiaz scored four goals, including one in the 3-1 final win over Toronto FC. In nine postseason games with the Sounders, he has scored nine goals.

The Sounders are immensely dangerous on set pieces, with four of their seven postseason goals coming off of Nicolas Lodeiro’s corner kicks. Lodeiro leads the way in assists, including three in the postseason, and he has eight career playoff goals for the Sounders. Jordan Morris hasn’t scored in the last two games, but he is another big threat for the Crew to keep an eye on at all times.

Can the Short-Handed Crew Come Out on Top?

To keep the Sounders from repeating, the Crew will have to win without two of their key players. Midfielder Darlington Nagbe and winger Pedro Santos were not medically cleared to play in the final.

This would have been Nagbe’s third appearance in an MLS Cup final, as he won with the Portland Timbers in 2015 and Atlanta United in 2018, so the absence of his experience is a big loss. Santos, meanwhile, has been one of the Crew’s key attacking threats all season long. Santos scored six goals and assisted on eight more in the regular season, and he scored in Columbus’s playoff wins over the New York Red Bulls and Nashville SC.

The Crew was the league’s second-best team defensively in the regular season, allowing only 21 goals in 23 games. After allowing two goals in the conference quarterfinals against the Red Bulls, the Crew shut out Nashville and the New England Revolution in their last two games. On the attacking end, they were fourth in the Eastern Conference in goals in the regular season with 36, and they have netted six times in the postseason.

Leading the way for the Crew in the goal department is USMNT star Gyasi Zardes, who has 15 goals in 25 matches this season, including two in the postseason. Argentine attacking midfielder Lucas Zelarayan, who was named the league’s Newcomer of the Year, has six goals and leads the way in assists. With Santos out, Zelarayan will need to have a big game.

Raul Ruidiaz to score in 90 minutes and Seattle to win the match (+330): Ruidiaz has been a stud in the postseason in his time in Seattle, and that makes this an excellent bet. In his nine postseason games with the Sounders, he has failed to score in only two games: this year’s conference semifinal win over FC Dallas and last year’s conference semifinal win over Real Salt Lake.

In any other year and against any other opponent, Columbus’s home advantage could be a decisive one.

But attendance is limited to only 1,500 due to COVID-related restrictions, and the Sounders’ experience and relentless spirit are too much to overlook, even if the Crew were at full strength.

Seattle’s shootout win over Toronto FC is the only one of the previous five finals to not be decided in 90 minutes. So feel safe taking the Sounders to win in regulation and take home their third title.