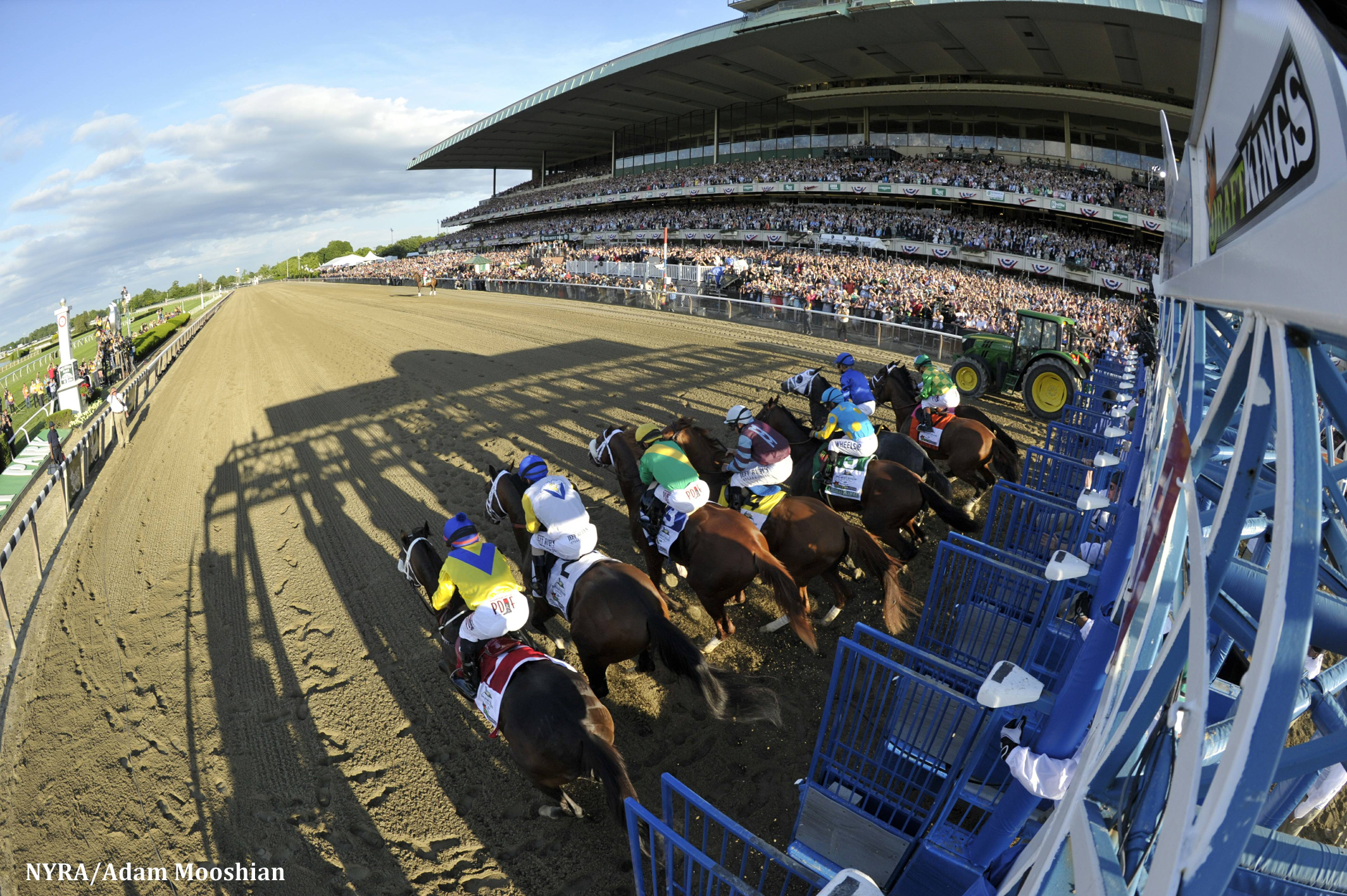 The 6th race on the Belmont Park dirt track for a mile is another case where the track bias might be at play.

With little speed in the race, there is a good opportunity to take a chance on a speedy outside horse who may steal the race from horses with better credentials.

Overall, this is not a very classy race, a basic allowance for non-winners of more than one race outside of Maiden or Claiming. Most of the horses are either chronic losers or just out of the Maiden rank.

Usually, class handicapping and using the par speed figures would be crucial to determine who has the probable class to win it. Here we will still use these very useful tools but pace handicapping is probably the most important factor considering the lack of speed in the race

Number 1, MAZMANIA has finally broken her maiden, after 18 unsuccesful tries. She did it in a Maiden Claimer and romped the field on a sloppy track. I don’t think that the hot workouts since are really indicative of a sudden improvement following the win that could let her close from being competitive at this much higher class level… It is probably safe to pass on MAZMANIA

Number 2 CARLISLE BELLE broke her Maiden much faster than her inside position neighbour but it was still in a Maiden Claimer and in time that would be nowhere near competitive enough for today’s class level… There is really no reason to think that CARLISLE BELLE has what it takes to win today. She might be a bit of a pace factor but even those figures are not so impressive…

Number 3, PUFFERY has raced mostly in sprints so far in her career and her only Mile attempt was unsuccessful, though the sloppy track might have been a factor. She shows a very good workout since her last race and she has a couple of races with decent speed figures. At 3 years of age, it is not impossible that she has progressed and that the mile is what she needs to succeed. PUFFERY has a bit of endurance in her pedigree. She might be better after her last race, but she was still dominated soundly at this same class level then. It is a bit hard to trust PUFFERY for a win today, but it is not impossible. If she indeed has progressed, a place is in the realm of possibilities at least.

Number 4, TAKE CHARGE AUBREY comes of her dominant maiden win where she earned a pretty good speed figure. This is sure to attract a few bettors and her morning line odds are set at 3-1 by the Belmont Park track handicapper. It looks like TAKE CHARGE AUBREY is at the right class level and she will at some point win one of these races. Today, I am not sure, considering that the pace of the race should be relatively tepid. TAKE CHARGE AUBREY being a come-from-behind horse, she would likely prefer a hotter pace. At the pretty low odds that she will most likely start at, I am not betting on her today. But TAKE CHARGE AUDREY is at the right place and will win a race like this one someday.

Number 5 PINK TWIST has a couple of speed figures in her career that would be more than enough for this class and she came up short a couple of times at this class level too. She is in the right spot, that’s undeniable. She has a handful of good workouts since her last race so it all looks OK. I have my doubts though. First of all, PINK TWIST great performances came when she was under the stewardship of one on the best trainers in the world… She switched to a local trainer and had a very poor race last out with him. The trainer had tried the blinkers and maybe she did not like it? Maybe PINK TWIST also hated the sloppy track? There are a lot of excuses but that makes too many changes to be certain that she is going back to her best performances… She will likely go for the lead as one of the only two horses with early speed but I think that she might be outmatched and forced inside, when the outside will probably be better. PINK TWIST will most likely be heavily bet and I will bet against her.

Number 6, STRAWBERRY TEQUILA has a lot of starts (14) for a 4 years old and all but one were losses. She came relatively close a couple of time but has not won since she was 2 years old… The speed figures she earned in her lifetime are not shameful, but it looks like she does not have what it takes to win. I don’t see anything in her recent form to think that she has miraculously progressed so it is a pass, though she can grab a spot in the Trifecta.

Number 7, PAS DE DEUCE was an odds-on favourite last time out and barely won it but she showed quite a bit of determination, battling for the pace the whole race, being overtaken in the stretch and battling back to win it in the end. It was a very encouraging race and maybe was quite a performance as it was run on sloppy grounds and it is not clear yet if PAS DE DEUCE loves it or just managed it. In today’s race, PAS DE DEUCE seems to have the pace advantage, on the outside and that’s a plus on this Belmont Park track… She was given a bit of an extended break so her backers will have to hope that she is alright but at the 8-1 morning line odds I would for sure be willing to bet on it, considering the track bias.

Number 8, RACHEL’S BLUE MOON makes her first start in a route race and maybe it will suit her better, given that she failed 3 times following her win on first asking. She works for a good trainer and is paired with his top jockey so that’s a pretty strong signal of confidence. The workouts are not crazy impressive and the speed figures earned so far neither but maybe the change in distance is what she needs? RACHEL’S BLUE MOON will most likely try to come from behind which I think will be a losing strategy. But maybe she can grab a place at interesting odds.

Number 9, SATISFY has the best last time out speed figures in the field but those were earned working for a national trainer. For this one she switches to a rookie trainer, though one with a pretty good track record so far… The loss last time out was to a horse which did not repeat the performance so maybe it was not such a classy loss… SATISFY has a couple of impressive workouts since the last race so it is safe to assume that she is pretty sharp under this new trainer. So far, she has been running in sprints, coming from behind in the last furlong. She switches to a route today and that particular style is not the best to make the transition to routes and win at first asking in general. Today is probably also not the right day to try it as there is little pace expected. I think that SATISFY will come up short at low odds and there is value in betting against her.

Number 10, SALTY SMILE is the horse with the best winning record in this race, two races won. This is allowed as both were Maiden or Claiming. As such, she is well suited for this class level but having ran in claiming class as recently as May is not a great sign. SALTY SMILE was claimed then and moved to a worse trainer, so it is unlikely that he is the guy who figured the magic recipe for her. There is an encouraging bullet workout and she puts on blinkers for the first time so maybe we can expect her to challenge for the lead. But I think that she is more likely to not get it and race evenly, maybe for a place but that’s doubtful.

Little expected pace at Belmont Park means that an outside speedy horse could try to go all the way and manage to do it.

I believe that the likely favorites have serious shortcomings and question marks, so it is a good idea to pursue value with hopefully some help from the Track Bias.

I think that PAS DE DEUCE can continue her class progression by going for the lead from the outside and the high odds expected at post time justify to bet on that.

Other relative longshots have a chance as well.

PUFFERY is still a young horse and could have progressed since her last race. Adding her to exotic bets could pay off handsomely.

RACHEL’S BLUE MOON is making some changes and maybe they can pay off. She has shown some quality in the young career and her trainer is a pro. It is a good idea to add her at the bottom of exotic bets at relatively long odds.