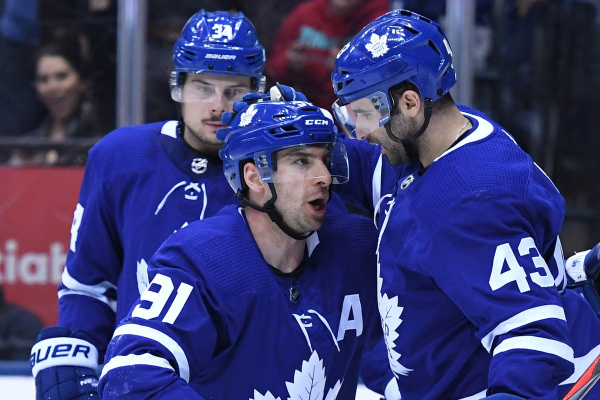 Once again, the Maple Leafs and Bruins will fight it out in the first round. Boston came out victorious last year in seven games, and after another stellar year, they are aiming for another trip to the Stanley Cup Final.

But this year’s Toronto squad is improved from last year, with additions like JohnTavares and Jake Muzzin rounding out the roster. Toronto is searching for their first Cup since 1967.

Here are some keys for each team, along with who’s taking Game 1 on Thursday night.

The Bruins are one of the more balanced teams in the playoff field, ranking in the top 10 in goals for and against. But their strength comes from defense, where they are at the top of the league in CORSI against, the measurement for possession.

What will be essential for Boston, besides their defense continuing to play at a high level, will be production from their lower lines. With Patrice Bergeron, David Pastrnak, and Brad Marchand, the Bruins have three elite playmakers and finishers. But past them, only DavidKrejci put up over 50 points among the rest of the forwards. It is essential that the guys like Jake DeBrusk, Charlie Coyle, and Danton Heinen step up if Boston is going to keep pace with the Maple Leafs’ lethal offense.

Another thing to look out for is Boston’s health. The Bruins were hit with injuries to defensemen Zdeno Chara, Charlie McAvoy and Kevan Miller earlier in the year. Pastrnak also missed a good chunk of the second half with an injury. Everyone seems to be healthy now, and if this group stays on the ice during the long, brutal playoff stretch, the Bruins can match up against anyone.

While the Bruins are a team built on defense, the Leafs are built almost entirely on their ability to score. Over their last 25 games, Toronto ranks as the number one team in CORSI for, making this matchup against Boston even more interesting. They’ve also ranked in the top three in goals and shooting percentage throughout the whole season.

To win Game 1, as well as the series, their keys will go hand in hand with the keys for Boston. For Toronto to have a chance, they will have to shut down the Bergeron-Marchand-Pastrnak line. They were able to do a decent job at containing them last year, and now this year the task will go to John Tavares, Mitch Marner, and Zach Hyman. In the few games between these teams this year, Tavares and company matched them fairly well in shot and chance rate, which will have to continue in this series.

It’s an elite offense versus an elite defense, and a series that I expect to go seven games once again. Road teams have had some success early on, winning three of the five series openers on Wednesday. And I think tonight follows suit. I’ll take the Maple Leafs to steal Game 1 on the road.