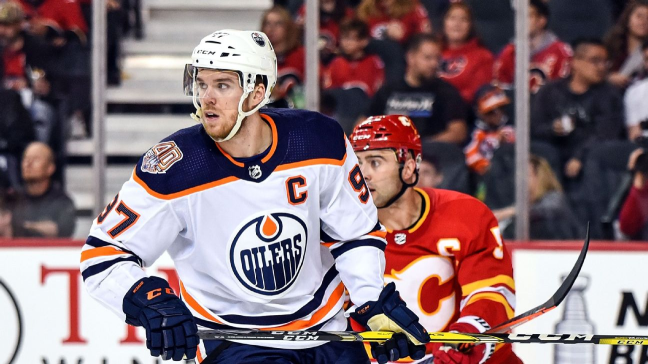 It’s a short two-game slate in the NHL on Wednesday, with the later game a battle between first-place clubs. The defending champion St. Louis Blues (10-3-3, 1st Central) continue their Canadian road trip to face the surprising Edmonton Oilers (10-4-2, 1st Pacific). Here is a preview for this game, complete with odds and a pick.

Through 16 games, both of these teams have grounded their identities in solid defensive play. We’ll start with Edmonton, which has allowed an average of 2.5 goals per game, sixth in the NHL. While they’re average in shots allowed with 30.9 per game, the Oilers have been successful on the penalty kill with a seventh-best 86.3 percent.

While offense has not been either team’s strong suit in the early stages, they’re both capable of scoring when they need to, particularly on the man-advantage. The Oilers are 20th with 2.81 goals per game, while the Blues are 15th with 3.06.

Both teams are near the bottom in shots per game as well, but both have shooting percentages in the top half of the league. Then there’s the power play, where the Oilers are third with a 26.7 percent success rate, and the Blues aren’t far behind with a 23.5 percent rate that’s ranked seventh.

Edmonton ripped off five straight victories to start the season and has carried its momentum into a spot atop the Pacific Division. But after dropping their last game in overtime on Monday against the Coyotes, their third loss in five games and fifth in their last eight, it will be interesting to see how the Oilers respond to a team that raised the Stanley Cup just five months ago.

“There is always an aura that goes with the champion,” Edmonton coach Dave Tippett said. “I’m sure if you ask St. Louis, they’re seeing that every night (from their opponents). They have a good deep team; they play a certain way every night, and that’s how I expect them to play on Wednesday.”

The Oilers will rely on superstars Connor McDavid (seven goals, 17 assists) and Leon Draisaitl (13 goals, 14 assists) to generate offense. That All-Star duo makes up half of the league’s top four point-scorers, trailing Bruins teammates David Pastrnak and Brad Marchand. Tippett likes to play both of them on the same line, so St. Louis will have to be on high alert when that line takes the ice.

Since losing Vladimir Tarasenko to a shoulder injury that will sideline him for close to the entire regular season, the Blues have won five in a row, four of which have come in overtime. Overall, they have won seven of their last eight and are back on top of the Central Division.

While Tarasenko is on the shelf, the Blues have been getting solid production from their veterans. Last year’s Conn Smythe winner Ryan O’Reilly (four goals, 12 assists) leads the team in points, followed by Brayden Schenn (10 goals, five assists) and David Perron (seven goals, eight assists).

While Edmonton has the two most dynamic players in the game, St. Louis has the depth advantage with some pretty good players on the top lines as well.

The Oilers are home favorites on Wednesday, listed at -145. I tend to like them as well, for a couple of reasons. First, Edmonton is a defensive team that plays very similarly to St. Louis but will have a big advantage in net with Smith over Allen. Second, with the Blues playing Tuesday in Vancouver and playing many overtime games lately, I think the Oilers are catching them at the right time.

Overall, these are evenly-matched teams, but I’m going with the Oilers -145 to put an end to the Blues’ winning streak.