Rangers vs. Penguins Game 4 Odds and Predictions: Penguins Use Home Ice to go Up 3-1 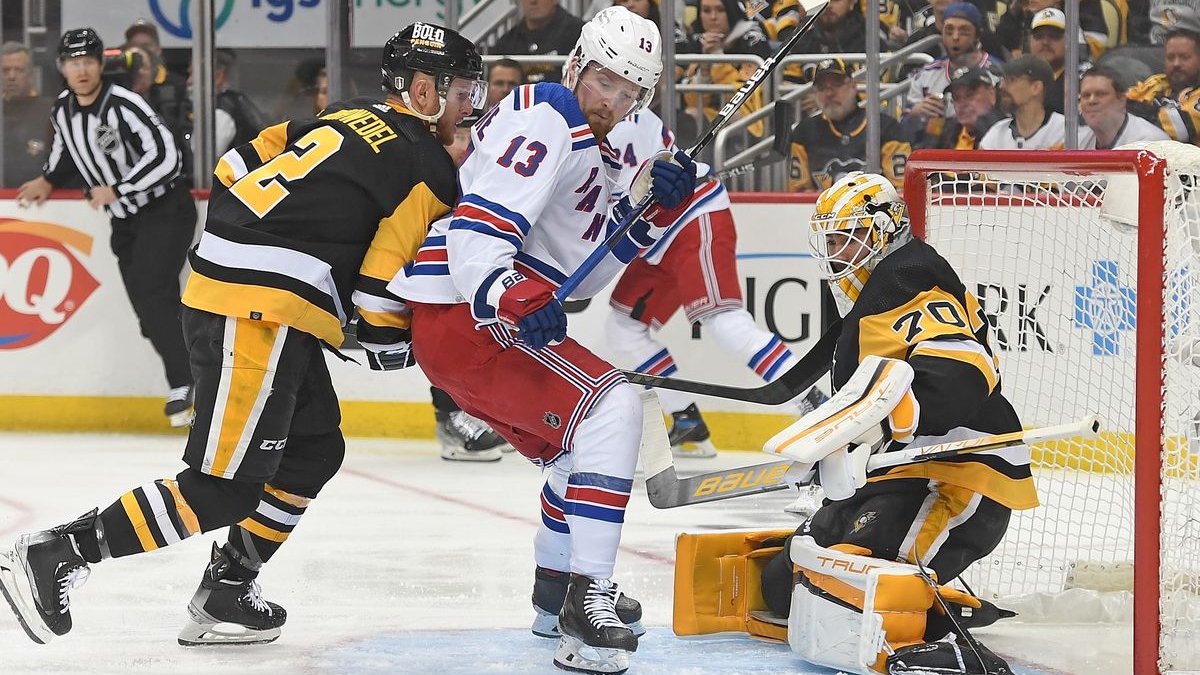 The Pittsburgh Penguins and New York Rangers meet in Pittsburgh on Monday night for Game 4. The Penguins used home ice advantage to pull off a convincing win in Game 3 and take a 2-1 series lead.

Pittsburgh scored four goals in the first period their last time out. Although the Rangers came back to tie the game at 4-4, the more playoff experienced Penguins were able to shut down the New York offense in the 3rd period and win 7-4.

Large, explosive outbursts were seen in Game 3. Each period saw 3 or more goals scored between the two teams.

Pittsburgh has the slight edge in the odds for this game. Their home ice advantage and recent ability to find the net in bunches has the lower seeded Penguins as the favorites.

In Game 3, Pittsburgh’s top line did not register a single point until the Rangers pulled their goalie in the final minutes. Instead, it was Evan Rodrigues and Jeff Carter who stole the show.

Rodrigues had 2 goals and an assist in the first period on Saturday. The only assist was to Jeff Carter who tallied two goals himself.

Rodrigues and Carter combined for only 22 minutes of ice time, but they did their damage early and often. Two of their three first period goals were on the power play, and Pittsburgh may look to put this dynamic duo back on the ice in similar situations going forward.

Even though Pittsburgh’s early lead was erased in the second period, third string goaltender Louis Domingue was able to do enough to keep the game tied and not allow the Rangers a lead in the game.

The Rangers did show promise in Game 3 by climbing out of a large deficit, but they ultimately came up short where it mattered most. They failed to convert on all 3 of their power play chances and let the Penguins outshoot them in the game.

I expect a lower scoring game on Monday night. Both teams are finding their groove on defense, and neither one has been committing many penalties as of late. With home ice advantage and momentum on their side, the Penguins have a solid chance at putting the Rangers on the brink of elimination.

The best value lies in the moneyline for this game. I expect a close game, and taking a team to win by 2 or more doesn’t seem like the right way to go. The moneyline is still fairly valuable due to both teams being so closely matched.

If you are looking at the spread, only bet the Rangers if they are +1.5. BetRivers currently has this as the spread, and I can see some sneaky value coming out of a bet like that.

It has been a miserable month for the Seattle Mariners, and things are unlikely to get any better tonight as they welcome AL Cy Young Award favorite Justin Verlander and the Houston Astros to T-Mobile Park. After just missing out on the MLB playoffs last season, the Mariners entered this season with hopes of finally END_OF_DOCUMENT_TOKEN_TO_BE_REPLACED