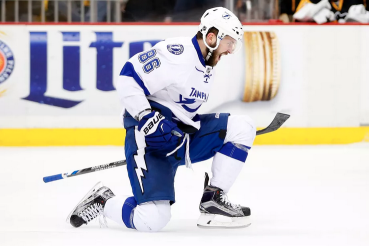 Some streaks were continued and others were snapped in a busy night in the NHL. Here’s some of the latest news happening on the ice to help you bet on the NHL.

David Krejci scored the game-winning goal with 45 seconds remaining to give the Bruins a 3-2 win over the Senators. Boston’s point streak is now up to 19 games, going 15-0-4 since January 29th. Their 93 points (42-17-9) gives them the second-best record in the league, trailing only the Lightning.

Nikita Kucherov scored twice in the Lightning’s 3-2 win versus the Red Wings, setting the franchise record for most points in a season. Kucherov’s 110 points (33 goals, 77 assists) in 69 games passes the previous record of 108 set by Vincent Lecavalier back in 2006-07. Tampa Bay has won 13 of their last 15 games and lead the Bruins by 15 points in the Atlantic Division.

Cam Atkinson scored two goals and Sergei Bobrovsky made 28 saves as the Blue Jackets beat the Penguins 4-1 in Columbus. The win snaps an eight-game losing streak the Blue Jackets had against the Penguins, with their last victory before Saturday back on February 17th, 2017. Columbus moves into a tie with the Canadiens for the second Wild Card spot, trailing the Penguins in the first spot by two points.

Mark Stone scored his first goal as a Golden Knight as Vegas cruised to a 6-2 victory over the Canucks. The Knights have won six straight and are up to 81 points (38-26-5), good for third in the Pacific. Goaltender Marc-Andre Fleury also made history, as the veteran earned career win number 438, passing Jacques Plante for sole possession of eighth place on the all-time wins list.

The Oilers‘ four-game winning streak was snapped on Saturday by John Tavares and the Maple Leafs. Tavares led the charge with a goal and two assists as the Leafs went on to win 3-2. Even though Edmonton’s winning streak is over, Leon Draisaitl had two assists to extend his point streak to 13 games (nine goals, 11 assists).

Kevin Lebanc scored the overtime winner as the Sharks beat the Blues in extra time 3-2. San Jose has now won four games in a row and leads the Flames by one point in the Pacific Division (90 points). Even without Erik Karlsson for the rest of the regular season, the Sharks (41-19-8) are 13-3-1 in the past 17 games and lead the Western Conference in points.

The Rangers came from behind to knock off the Devils 4-2, snapping their six-game losing streak. Vladislav Namestnikov scored the game-winner with 6:35 remaining to go along with two assists, and Ryan Strome also chipped in two goals and an assist. New York’s last win before Saturday came against the Devils as well, a 5-2 home win on February 23rd.

Nino Niederreiter scored two goals to lead the Hurricanes to a 5-3 win over the Predators. Carolina also received goals from Sebastian Aho, Justin Williams, and Jordan Martinook, as well as 31 saves from Petr Mrazek. The Hurricanes (37-24-7) have won nine of their last 12 games, and find themselves in third place in the Metropolitan Division with 81 points, owning the tiebreaker against the Penguins.

Tonight’s NBA betting schedule is lacking in overly compelling matchups, but tonight’s action will also be taking place with a few notable names missing. Booker, Morant, and Lillard Sidelined Tonight and Beyond Booker Out Versus Pistons Due to Hamstring Injury The Phoenix Suns lost Devin Booker (hamstring) on Tuesday against Golden State but closed out END_OF_DOCUMENT_TOKEN_TO_BE_REPLACED