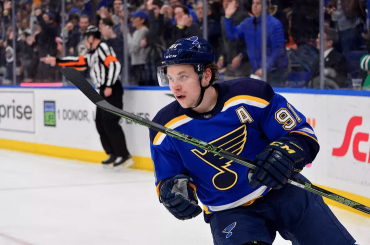 It has been a very busy weekend of NHL action, highlighted by impressive performances and the extensions of streaks. We recap the action, as well as a couple of trades, in the latest NHL recap.

Vladimir Tarasenko extended his point streak to 11 games with a goal and assist, and Jake Allen saved 32 shots, as the Blues beat the Avalanche 3-0 for their ninth straight win. During this stretch, they have outscored opponents 36-14, including consecutive shutouts. They are one win away from tying a franchise-record 10 consecutive wins, a mark they reached in 2002. They are in Minnesota to take on the Wild Sunday afternoon.

Bolting to Another Win

Another day, another win for the league’s best team. Led by 20 saves from Andrew Vasilevskiy and another goal from Nikita Kucherov, the Lightning blanked the Canadiens 3-0. Tampa Bay has now won five games in a row and is 7-0-2 in their past nine games. As for Kucherov, the NHL leader in points has now scored a goal in four straight games. And with Saturday’s shutout, Vasilevskiy now has 18 shutouts in his career, setting the Lightning franchise record.

It was all Darcy Kuemper on Saturday night in Arizona. The goaltender had 22 saves as the Coyotes shut out the Maple Leafs 2-0. It’s the second shutout of the season for Kuemper and the fourth of his career. Thanks to Kuemper’s performance, along with the goals from Alex Galchenyuk and Josh Archibald, the Coyotes find themselves just three games behind the Wild for the second wild-card spot in the Western Conference.

Saying Hi to an Old Friend

Artemi Panarin scored two goals and an assist as the former Blackhawk lifted the Blue Jackets to a 5-2 over the Hawks in Chicago. Columbus has now won five of their last six games, sitting in third place in the Metropolitan Division. Pierre-Luc Dubois had a goal and an assist, Ryan Murray had three assists, and Sergei Bobrovsky stopped 39 shots for Columbus.

Charlie McAvoy scored the go-ahead goal with 1:13 left in the game as the Bruins defeated the Kings 4-2 in Los Angeles. It was Boston’s fifth straight win, and their 10th straight game with a point (7-0-3), and now puts them in second place in the Atlantic Division, one point ahead of the Maple Leafs. Jake DeBrusk also scored in his third consecutive game, and Tuukka Rask had 23 saves to win his fifth straight start.

Karlsson Swims Back to Sharks

Erik Karlsson, who had missed the previous nine games with a groin injury, netted an assist in his return to the lineup as the Sharks beat the Canucks 3-2 in San Jose. Timo Meier, Logan Couture, and Joe Pavelski each had a goal and assist, and Martin Jones recorded 32 saves. The victory is San Jose’s seventh in their past eight games and extends their dominance of Vancouver, going 12-0-1 against them in their last 13 games.

Max Pacioretty scored two goals and Malcolm Subban made 29 saves as the Golden Knights beat the Predators 5-1 in Las Vegas to snap their four-game losing streak. Vegas is 3-7-0 in their last 10 games and just ended their franchise-record five-game losing streak at home. Brandon Pirri, Shea Theodore, and Oscar Lindberg also scored for the Knights.

The Oilers, struggling to stay alive in the playoff race, made a pair of trades this week to shake things up. First, the Oilers traded former starting goaltender Cam Talbot to the Flyers in exchange for goalie Anthony Stolarz. Talbot’s numbers have taken a steep decline in the last season and a half, sitting at a 3.36 goals-against average and .893 save percentage this season. Then less than 24 hours later, they shipped Ryan Spooner to the Canucks for veteran Sam Gagner. It’s the second time Spooner has been traded this season after Edmonton acquired him from the Rangers in the fall.