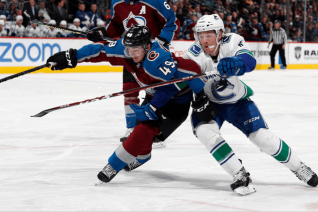 One of these teams is comfortably entrenched in the playoff picture, while the other is scratching and clawing to get in. Colorado is the latter team, who at 68 points is tied with the Wild for the final Wild Card spot. San Jose has 82 points and trails only Calgary for the top spot in the West.

In the last and only meeting this season, the Sharks won in Colorado 5-4 on January 2nd. San Jose is the favorite tonight at home, currently listed at -165.

Once on the outside looking in, the Avalanche have now put themselves firmly in the playoff mix. Colorado is 6-2-2 over their last 10 games, allowing just 21 goals during that stretch.

Thanks to a dynamic first line, Colorado’s offense is a top-10 unit, ranking ninth in goals, sixth in shots, and 10th in shooting percentage. Although defense and goaltending have improved recently, they still sit 21st in goals allowed and 18th in shots allowed.

Colorado is carried by a pair of 81-point players: Mikko Rantanen and Nathan MacKinnon. Those two, along with Gabriel Landeskog, are responsible for the majority of the Avalanche’s scoring. Defenseman Tyson Barrie (44 points) and forward Carl Soderberg (41) are additional guys capable of filling up the box score.

The goalie tandem of Semyon Varlamov and Philipp Grubauer has played well as of late, with Varlamov expected to start tonight. This year Varlamov is 18-15-9 with a 2.80 goals-against average and .911 save percentage.

Something’s in the Water

The Sharks are loaded this year, primed to make a run at another Stanley Cup Finals appearance. They have plenty of talent among their forwards and defenseman and are a respectable 6-3-1 over their last 10.

But a recent injury may put San Jose to the test. Erik Karlsson left Tuesday’s game, a loss against the Bruins after he aggravated a groin injury that previously held him out for 10 games over the last two months. He will be out for at least a week before being re-evaluated.

Without Karlsson, the Sharks have still been able to score among the best of them, ranking third in goals and shots, and fifth in shooting percentage. They will miss Karlsson on the other end, where they rank just 18th in goals allowed but allow the second-fewest shots.

Defenseman Brent Burns leads the Sharks with 70 points, but they have several forwards, including Joe Pavelski, Logan Couture, and Timo Meier, who are all within 51-59 points. New acquisition Gustav Nyquist has 49 points, playing in his second game with San Jose tonight.

The Sharks boast a deep group and are capable of putting together an offensive show at any point. But Colorado is playing well, their goaltending has been much better as of late, and I think they can pull off the upset at the “Shark Tank.” I’ll take the Avalanche in an upset -145.