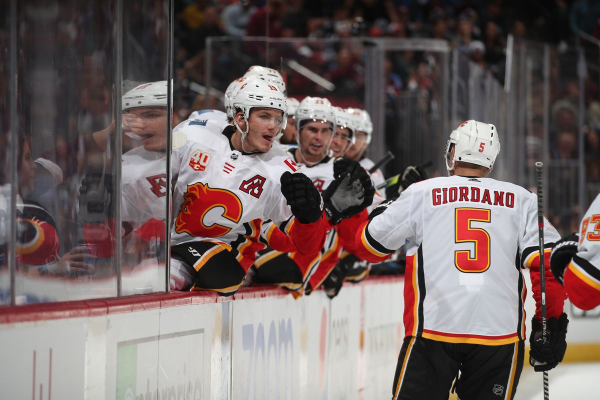 There are only two games on the NHL schedule on Halloween night, the first of which is a battle between two Western Conference foes. The Calgary Flames (6-6-2, 6th Pacific) are on the road taking on the Nashville Predators (8-3-1, 2nd Central). Nashville comes in having won four games in a row, while Calgary has dropped its last two.

Here is a preview for Thursday night’s matchup, followed by odds and a pick to win.

Fourteen games into the season and the Flames have failed to bring the same heat that made them Pacific Division champions last season. Calgary is averaging just 2.5 goals per game, 26th in the NHL. The Flames have been below average on offense across the board, ranking 18th with 30.8 shots per game and 24th in shooting percentage.

Calgary has fared better on defense, where it allows the 14th-fewest goals per game at 2.93 and 15th-fewest shots per game at 31. Calgary’s bright spot as a team comes from its third-best penalty kill, which is especially impressive considering it averages the fourth-most time in the box per game.

The Predators were once again expected to be bonafide playoff contenders, and through 12 games, they have proven people right. Nashville leads the NHL with four goals per game, partially due to an 11.9 shooting percentage that is third-best in the league. The Predators are excellent at attacking the net, generating the ninth-most shots per game with 33.5, and also rank in the top 10 in face-off percentage.

After four straight wins, two of them coming in the shutout variety, Nashville’s goals allowed per game has improved to 2.75, ranked 11th in the league, as well as shots allowed, which at 29.3 per game is the fourth-fewest. However, the penalty kill still needs some work, as it ranks just 25th.

Despite some early-season struggles, Calgary has some very good pieces in place. All-Star players like Johnny Gaudreau (three goals, eight assists) and reigning Norris Trophy winner Mark Giordano (three goals, six assists) are having okay seasons by their standards, weighed down by shooting percentages that are sub-10 percent each. The duo also has just four and three points on the power play, respectively.

In their recent game against the Hurricanes, the Flames failed to score on the power play for the first time in four games. So with a matchup Thursday night against a team that struggles while short-handed, Calgary will need to take advantage of any power-play opportunities it has. That will start with the two stars mentioned above, as well as leading goal-scorer Elias Lindholm, who has eight goals, four of which have come with the man-advantage.

Nashville, on the other hand, is a team that is less reliant on a couple of stars. While leading scorers like defensemen Roman Josi and Ryan Ellis (13 points each), as well as new acquisition Matt Duchene (two goals, nine assists), are great, the Predators are a team that can best you with their depth. Look no further than a guy like Nick Bonino.

Bonino, who has found a consistent home in the bottom-six forward group, recently scored a hat trick in a game, bringing his goal total to a team-high six. Guys like him, Calle Jarnkrok, and Colton Sissons are all depth pieces, but all have eight or more points this season. For Nashville to really make things difficult for Calgary, these role players will have to play a big part of their success once again.

The Flames are expected to turn to David Rittich in goal for this one. After a breakout year last season, Rittich is 5-4-2 with a respectable 2.86 GAA and .910 save percentage. Meanwhile, Pekka Rinne is having a career-best start to his season and will look to continue that for the Predators. He is 7-0-1 with a 1.74 GAA and .937 save percentage.

As expected, the hot team at home is expected to win. The Predators are -150 favorites to beat the Flames, and honestly, it’s hard to disagree. Not only has Nashville been the better team this season, it is also 6-1-1 at home. Meanwhile, Calgary is sputtering as of late and has really struggled away from home, going 2-5-1 on the road. I’m picking the Predators -150 to beat the Flames this Halloween.