Improved Odds: How the new MGM-NHL Partnership will affect betting on hockey 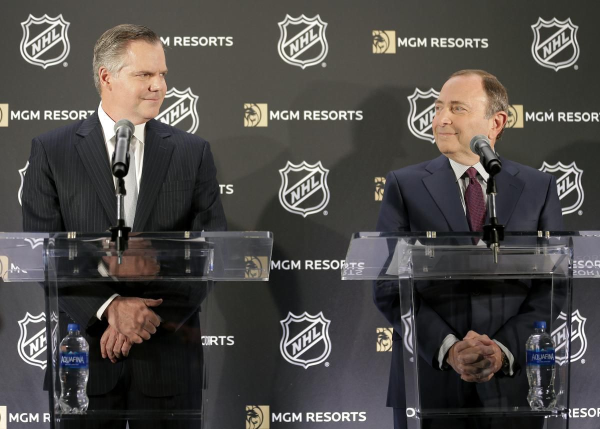 This past Monday, the NHL held a press conference to announce a major partnership with MGM Resorts. This partnership is one that spreads league-wide and involves much more than a typical sponsorship. NHL Commissioner Gary Bettman said:

This is a broad, encompassing relationship between two powerful brands.

As part of the deal, MGM will gain access to all the NHL logos and assets for its marketing purposes, and the NHL database (surprisingly small at 2.3 million) will also be given access to the popular mLife rewards program. NHL fans will be given discounts at MGM Resort properties around the world, and obviously, the company’s ties to the Vegas Golden Knights via the T-Mobile Arena are locked in.

However, a couple of points came out of the news conference that will have implications from the perspective of sports betting. During the conference, Gary Bettman was asked twice about his thoughts on having betting lounges or kiosks in the arenas as a part of this deal. Both times, Bettman referred to the mobile betting experience and that players in regulated states will be able to find the betting lines on their phones and quickly make bets.

Now, in my opinion, it seems that having kiosks available for bettors who want to bet anonymously would still have a positive impact, our hope is that the NHL will use their data to help power these MGM betting apps.

This would allow players to see betting trends in real time and make their bets accordingly. The New Jersey Devils have already announced plans for a betting lounge in their arean, so we will soon see what type of response this gets from the fans.

Second, there was an announcement that in part of the deal to provide data to MGM, that the league and the casino company were going to work together on a set of advanced data metrics. At this stage, it is difficult to say what those metrics would be or if they would be exclusive to MGM for a period of time.

What we do know is that the league is keen to grow viewership through betting, and having more advanced stats in real-time during a game will no doubt enhance the in-play betting opportunities. One issue that hockey faces from a betting perspective is the sheer speed of the game and the lack of rhythm.

It isn’t like basketball which also has a lot of changes of possession, as there is a defined shot clock and teams are able to set up plays. In hockey, the game moves so quickly and the change of possession happens without any notice. Adding advanced stats to the gameplay as well as the individuals on the ice (speed, shot speed, etc) could add many more ways fans can engage with a betting app.

What’s old is new once again

Here’s a thought – what about going back to the drawing board with the old Fox puck? We don’t think that you need the puck to be glowing on the ice, but in the twenty years since this technology was introduced, the improvements in tracking would also for a chip to easily be inserted into the pucks and with that track puck possession (with tracking in sticks) and speeds of shots, all of which would be far more advanced than the current stats being collected by hand.

Imagine a scenario where you could bet on the hardest shot of a period, or by an individual player during that period. Or a bet where you parlay the amount of time Connor McDavid is on the ice with the same for Auston Matthews?

The possibilities are endless, and the NHL could find itself with a whole new fanbase as a result. Gambling has a way of making sports interesting even to the uninitiated (look at what betting on the Kentucky Derby does for horseracing), and the NHl is the kind of sport that could use that influx of new eyeballs.

Whatever the long-term plans are for MGm and the NHL in this partnership, it was confirmed that this is not an exclusive relationship, so we can expect more announcements from the league and its teams in the coming months.

The American Gaming Association released a report this month that outlined how each of the four professional sports leagues in the U.S. could benefit from sports wagering, predicting the NHL could reap an additional 216 Million USD per year. This is far from spare change, and Bettman and the owners need to be progressive in their thinking to maximize partnerships like this one.