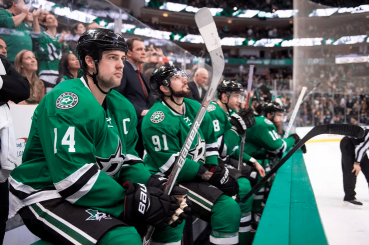 Two Central Division foes battle it out in the Music City tonight, as the Stars and Predators face off in Nashville. Both teams are coming off of victories on Friday, as Dallas (26-21-4, 3rd in Central) beat the Wild 3-1, and Nashville (31-18-4, 2nd in the Central) cruised past the Panthers 4-1.

Both of these teams are playing solid hockey as of late, with each of them riding three-game winning streaks. However, playing the second game in a back-to-back can be tough for any team. So far this season, Dallas is 1-6-0 coming off of a game the previous the night. Nashville has fared much better, going 3-2-1.

This is the third meeting between these clubs this season. The Predators won in Dallas 5-4 in overtime back in November, while the Stars shutout the Predators 2-0 in Nashville at the end of December. This go-around, the Predators are considered a big favorite at home and are listed at -180.

In years past, the Stars were a team that relied on heavy offense to get them wins. Led by stars Jamie Benn and Tyler Seguin, Dallas scored a lot of goals but also gave a lot up. However, this season has been a complete flip of the script.

Dallas ranks 2nd in the NHL with 2.53 goals against per game. Only the Islanders give up fewer goals than the Stars do on average. Their play on the penalty kill has also been well above average, with an 82.8% mark that ranks 7th in the league.

However, thanks in part to sub-optimal seasons from Benn and Seguin, only the Ducks and Kings have fewer goals per game than the Stars (2.55). They are still okay on the power play (20.3%), but rank 30th in power-play chances.

Even though the offense has been missing for much of the season, stellar defensive work from a group that includes John Klingberg, Esa Lindell, and rookie All-Star Miro Heiskanen has kept the Stars in playoff contention. Dating back to January 8th, Dallas has allowed more than two goals just once, in a 3-1 loss to the Blues at home. In their latest three-game winning streak, they have allowed an average of one goal per game.

With Ben Bishop drawing the start yesterday, it is expected that Anton Khudobin will start tonight for Dallas. Khudobin has quietly been a productive netminder for the Stars, recording a 2.46 GAA and .923 save percentage in 21 appearances.

Predators On The Hunt

The Predators are once again playing sound, consistent hockey. They return home following three road wins and are 6-3-1 in their last ten games. In those three games, they held Colorado, Vegas, and Florida all to just one goal.

Defense has been a strong point for Nashville all season. They rank 3rd in goals against per game at 2.55, just behind Dallas. They are also in the top 10 in shots allowed (29.4), while being an average 15th in penalty kill percentage at 80.6%.

While not spectacular offensively, which includes a league-worst power play unit, Ryan Johansen and Viktor Arvidsson are among the leaders on a solid offensive team. Nashville ranks 12th in average goals at 3.09, 11th in shots on goal at 32.3, and 17th in shooting percentage at 9.6. To put that into perspective, Dallas ranks 29th, 22nd, and 29th in those same categories, respectively.

Goaltender Juuse Saros started for Nashville yesterday, so expect the normal starter Pekka Rinne to play on Saturday. In 36 games, the 36-year old Pekka Rinne is 18-12-3 with a 2.47 GAA and .915 save percentage.

Both teams are playing well, but ultimately I will side with the home team. In addition to struggling in the second half of back-to-backs, Dallas is also just 9-13-2 on the road this season. As for Nashville, Rinne is rested, they’re back home (where they are 16-9-0), and I think they can score more than Dallas if it ends up being another shutout. I will take the Predators -180.