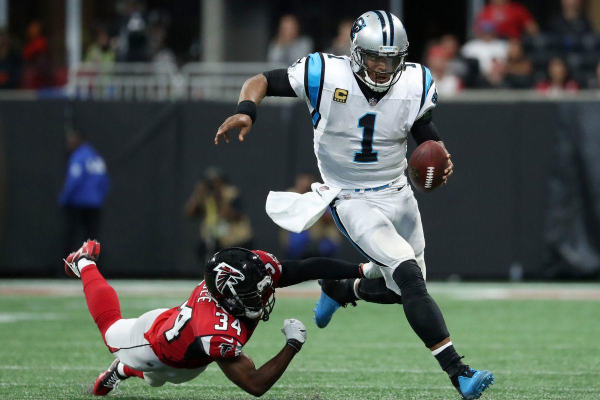 The Seattle Seahawks travel east to Carolina to play the dreaded 1:00 EST game traveling from the west coast. Both teams come off of close games last week. The Seahawks beating the Packers by 3 on Thursday Night Football at home while the Panthers traveled to Detroit and returned frustrated about the lack of execution on the 2-pt conversion to win the game, eventually losing by 1. Both of these teams are seen as about equal by Vegas, giving the Panthers the -3.5 spread at home.

The Seattle Seahawks are a really strange team. This year their running game and line play are much improved from past iterations of the Russell Wilson era. Russ has been much more of a pocket passer with fewer attempts this year. I think this has been an odd offense all year. Really, every single RB they have used has been about equally effective when called upon and they were all relatively effective.

The Seahawks passing offense has been suspect, to say the least. The overall production hasn’t been that bad, but pegging who it will be on a given week is virtually impossible. The possession receiver is Doug Baldwin, but he has acted as a decoy multiple weeks and has dealt with injury all year. Tyler Lockett is the receiver that I think will cause the most matchup problems for the Panthers, but I just think he can’t really be a game breaker with the limited volume. Lockett is one of the faster receivers in the league and typically gets 4-6 targets that all have major upside. I wish this offense would utilize him more, as he stretches the defense a lot, but they just don’t.

If I am the Panthers, I will be most wary of Lockett breaking big plays as the biggest path to beating us defensively. The Panthers have struggled with Lockett’s profile this year and even in years past with this personnel.

The Panthers side is actually a rather similar story. Cam has scrambled less this year than he did earlier in his career and this is the best passing year of his career. This is not to say that Cam doesn’t run. The Panthers have worked the option into the playbook more than in the past, allowing Cam to still run, but be more decisive when doing so.

Christian McCaffrey’s usage is one of the biggest things helping Cam out this year. CMC has proven to be a real threat in the run game, forcing teams to often take him out of the option play and allowing Cam to pick up easy yards with his legs. He also is incredibly reliable as a pass-catcher and gives Cam a safety net with big-play upside. CMC is also much better at picking up a block than you would think just looking at his stature. The Panthers’ wide receiving group is very interesting to look into. Devin Funchess is just kind of there. He catches a fair amount of balls every week, but he’s just not explosive enough to be the only option like he was last year.

Both D.J. Moore and Curtis Samuel have been much bigger for this offense than people realize. Having Samuel and CMC on the field at the same time is terrifying for a defensive coordinator due to the big-play possibilities. Samuel is a 99th percentile speed guy and can run with every single guy in the league. He has had a couple of big plays this year that continue to open up the offense. D.J. Moore is just really talented and gives Cam another option to go to on every play.

The difference of this game comes down to the situation and the skillsets. This is NOT a good spot for Seattle. They are a much better home team traveling about as far away as they could for an early Sunday game. Also, the Panthers are much better at home, which just compounds the Seahawks road struggles. The other thing is the Seattle defense should struggle with the speed Carolina brings to this game. Carolina’s offensive personnel should run all over the Seattle defense if they can get into open space. Give me the Panthers here -3.5.

After the Novak (or Novax?) Djokovic visa saga dominated pre-tournament headlines, we can finally look forward to some on-court headlines as the Australian Open gets underway. Djokovic news has taken the focus off of the tournament, which is certainly understandable. After all, the fate of the world number one and top seed would significantly impact END_OF_DOCUMENT_TOKEN_TO_BE_REPLACED