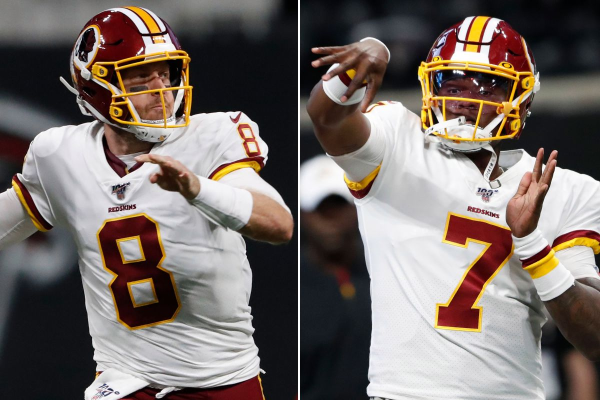 The Washington Redskins ended the 2018 regular season in a complete tailspin, and it doesn’t appear that 2019 is going to go much better. There are plenty of question marks on this roster, and the team doesn’t really have a clear-cut starting quarterback for week one. The Redskins were a terrific defensive team a season ago, but they are going to have to be great on that side of the ball to win any games this season.

Washington got off to a 6-3 start in 2018, and it looked as if they were headed to the playoffs. The Redskins won just one of their final seven games to finish the season with a record of 7-9. Washington was a much better team to bet on in 2018, finishing last season with a 9-7 record against the spread. The Redskins still play in a wide-open AFC East Division, but it feels like they are not on the same level as the top two teams.

The Washington Redskins didn’t make a ton of huge changes in the offseason, but they did do all they could to find their new franchise quarterback. Drafting Dwayne Haskins was one way that the Redskins tried to solve this issue, but they also brought in Case Keenum after a long season with the Denver Broncos. The Redskins will once again try and rely on their defense to win games during the 2019 regular season.

Adrian Peterson: Peterson is nearing the end of his Hall of Fame career, but still continues to put up great numbers. The former Minnesota Vikings star ran for over 1,000 yards a season ago and averaged 4.2 yards per carry. Peterson will take on an even bigger role this season with the Redskins searching for a quarterback.

Jordan Reed: Tight end Jordan Reed will be the top target for whichever quarterback winds up under center in Washington. Reed led the team with 558 receiving yards a season ago but is a little banged up heading into the season. Washington won’t throw the ball a ton, but Reed is a pretty sure-handed target.

Ryan Kerrigan: The Washington Redskins were terrific on defense during the 2018 season, and outside linebacker Ryan Kerrigan was a big reason why. Kerrigan led the team with 13 sacks a season ago and is the clear leader of this defense. The Redskins defense will have to be playing at an elite level this season.

Draft Class: The Redskins chose Ohio State quarterback Dwayne Haskins in the first round of the NFL Draft, and there is a good chance that he will see the field this season. Haskins set a ton of Big Ten and Ohio State passing records a season ago but has struggled a bit so far in the preseason.

There just aren’t many reasons to be optimistic about the 2019 Washington Redskins season. Quarterback Alex Smith is still out after suffering a gruesome leg injury, and they will be trying to find a solution at quarterback in the first few games. The Redskins play in a tough division, and they could easily end up in last place. Stay away from all of the postseason prop bets surrounding this team as they will be watching the playoffs from the couch. Vegas has set the win total at 6.0 wins, and the smart bet here is taking the under at +100.