Vikings Move to 6-2; Are They A Serious NFC Threat? 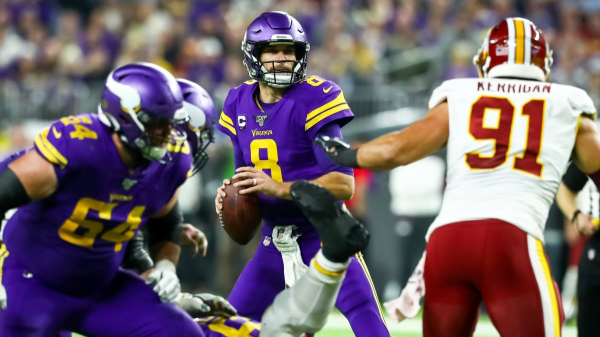 The Vikings took care of business against the bottom-feeder Redskins to move to 6-2 — Super Bowl or Bust? Let’s Slow Down.

The Vikings, as nearly 20-point favorites, dueled and vanquished the ailing Washington Redskins on Thursday night, who fell to 1-7 in a tough road game. Minnesota, which has been annihilating teams at home as of late, appeared to be who we think they are: A serious contender to take the NFC crown.

But are they that great?

The Vikings trail the one-loss Green Bay Packers for head of the pack in the NFC North, but closer examination of their schedule reveals some troubling things, particularly if you’re someone on the “Vikings are legit” bandwagon. Plain and simple: This is going to be another team that will find itself to be the odd man out in the NFC.

Schedule-wise, they have had a relative cakewalk, opening the season against the dreadful Atlanta Falcons, falling to the NFC North’s perennial favorites in the Aaron Rodgers-led Packers, bouncing back against a mediocre Raiders team, losing a slugfest to the Bears, smoking a rookie-led Giants team, demolishing the Eagles, outgunning Detroit, and now, winning a pretty competitive game against the third-worst team in the NFL.

Hardly a schedule that screams, “We’re going to the Super Bowl!” Scheduling isn’t something to blame a team for, as, obviously, they have no control over that. But when it comes to the teams they’ve beaten and the teams they’ve lost to, it speaks volumes as to why the Vikings are where they stand in the eyes of most fans.

Yes, they are a pretty good football team. With a solid defense, elite halfback, and the ultimate game manager in Kirk Cousins, the Vikings are a team that is, at best, a slightly above average football team.

Losing two games to your division rivals is a killer for anyone trying to hold up the Redskins as an elite squad. Sorry, we don’t believe you. With road games in back-to-back weeks against the Chiefs and Cowboys, they could very easily be sitting at 6-4 in about two weeks time.

Cousins is the ultimate game manager. While there have been game managers that have been a part of Super Bowl-winning teams, to be just a manager is not going to be enough to get the job done.

Should the Vikings have to face the likes of an Aaron Rodgers or Tom Brady in a big-time situation, no one in their right mind is going to bet on Cousins over either of those guys. Defense, while a critical component, can only take you so far.

Cousins is going to have to continually prove that he is capable of managing games, minimizing turnovers, and executing the right plays at the right time. Failure to do so spells disaster for this team, as one or two mistakes would spell doom for this Vikings team, which at times has struggled to score against superior competition.

Against the Redskins, the Vikings looked spectacularly underwhelming, and by no means stir any excitement for a Super Bowl run.

While this Vikings team is definitely one of the above-average football squads in this league, it is a ways away from being contenders. Despite an impressive run several years ago, a run that was cut short by the eventual Super Bowl champs out of Philadelphia, don’t count on Minnesota making the leap to hauling in world championships anytime soon.