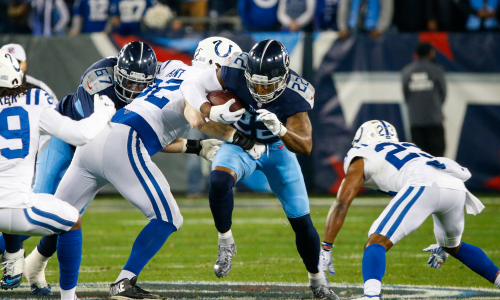 Thursday night will feature two division rivals battling it out in a crucial game. The Indianapolis Colts (5-3) will take on the Tennessee Titans (6-2) on Thursday at 8:20 pm ET in Nashville.

The Colts come into this game after a 24-10 loss to the Baltimore Ravens. Phillip Rivers threw for 227 yards and an interception. The Colts held a 10-7 lead going into halftime, but the Ravens scored 17 unanswered points in the second half to win the game.

The Titans are coming off a 24-17 victory at home over the Chicago Bears. A.J Brown led the Titans with four receptions for 101 yards and a touchdown. The Titans dominated the game on Sunday, having led the game 24-3 in the fourth quarter, before the Bears scored a couple touchdowns to make the score seem more respectable.

According to DraftKings, the Titans are favored at home to win this divisional matchup. Their money line odds sit at -136, while the Colts line sits at +120. The spread features the Titans favored to win by two points, with the over/under for points is at 48.5

The Tennessee Titans hold the advantage in the scoring category. They rank seventh in the league with 29 points per game. The Indianapolis Colts are eight spots down averaging 26 points per game.

On the defensive side of the football, the Colts have been arguably the best in the NFL. They rank first in total yards per game, with just 307 given up. They are ranked third in passing yards, rushing yards, and points per game. The Titans on that end have not been particularly good, they are ranked in the bottom 20 in passing and total yards per game. They are middle of the pack regarding rushing and points scored per game.

The Colts are looking to bounce back

The Colts must get going offensively. Against the Lions, they managed to put up 41 points, led by Phillip Rivers three second quarter touchdown passes. Against this Titans defense, the Colts should be able to take advantage of them to have a productive game offensively.

Rivers on the season, has 2087 yards and 10 touchdowns, he has thrown seven interceptions, however. He has been sacked just seven times though, so his line has done a good job keeping him upright.

On the ground, Jonathan Taylor (416 yards, four touchdowns) and Jordan Wilkins (222 yards, one touchdown) have been their leading rushers this season.

Titans look to increase their lead in the AFC South

The Titans come into this game with a one game lead on the Colts, a win on Thursday will put them ahead two games and an advantage in the tiebreaker. While most of the playoff teams have been led by great quarterback play, the Titans have gone in a different direction. Derrick Henry is having another spectacular season running the football again. He has 843 yards and eight touchdowns, while averaging 105.4 yards per game.

His ability to run the ball has allowed the Titans play action game to flourish. Ryan Tannehill is having a good season this year. He has 1981 yards, 19 touchdowns, to just three interceptions. He has also added 105 yards and a touchdown on the ground. His favorite targets this season have been A.J Brown (31 catches, 457 yards, six touchdowns) and Corey Davis (29 catches, 369 yards, three touchdowns). Jonnu Smith has also added six touchdown catches.

Taking the Titans to win and cover the spread

The Titans come into this game with the momentum, while the Colts are coming off a disappointing loss to the Ravens. The Titans offense has been better than the Colts and their defense is middle of the pack regarding points given up. Division games can always go either way, but the Titans have looked like the better team this season. With Henry leading the way I expect the Titans to take this matchup. The two-point spread is not something the Titans should have trouble covering.