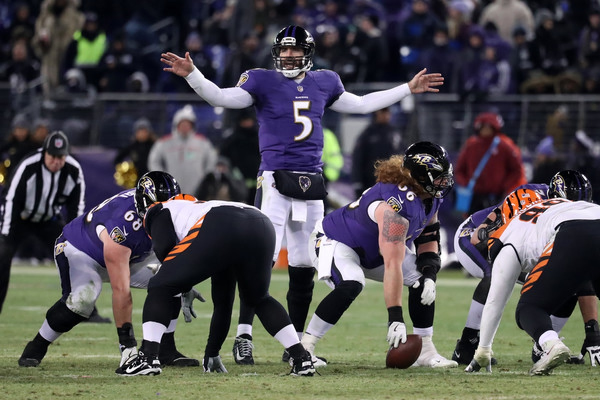 AFC North Division rivals will meet up for this week’s edition of Thursday Night Football. The Cincinnati Bengals will host the BaltimoreRavens with first place on the line in the AFC North. Both teams featured an impressive offensive attack to win their season openers last Sunday.

The BaltimoreRavens blew out the Buffalo Bills in week one, winning by a score of 47-3. The Cincinnati Bengals came from behind to beat the Indianapolis Colts by a score of 34-23. The winner of this game will take over first place in the division after the Steelers and Browns played to a tie last weekend. The Baltimore Ravens are +1.0 in the game on Thursday night.

The Baltimore Ravens have two very talented quarterbacks on their roster, but there is no controversy. Joe Flacco is the starter, and rookie LamarJackson will have a set number of plays each game to try and make a big impact. In the season opener, Flacco threw for 236 yards and three touchdowns to lead the Ravens offense. Jackson had seven rushing attempts for 39 yards in the win but only completed one pass. Look for both players to see time in this game.

The Baltimore defense was the big story in their season opener. The Ravens put a ton of pressure on the Buffalo Bills and recorded six sacks in the game. Baltimore was able to use the pressure to force a pair of Bills turnovers as well. The Ravens took a step back on defense last season but looked impressive in new defensive coordinator, Don Martindale’s debut. Look for Baltimore to put pressure on the Bengals in this game as well.

All-Pro wide receiver A.J.Green was the offensive star for the Bengals in their season opener. Green hauled in six catches for 92 yards and one touchdown in the week one victory. Green and Bengals quarterback Andy Dalton has had a long career together and the pair put on a show against the Colts. The Ravens will try to take away Green’s playmaking ability in this contest.

The Bengals defense was undisciplined in week one, it almost cost them the game. Safety Shawn Williams was the first NFL player to be ejected due to the new tackling rule after hitting Colts quarterback Andrew Luck with his helmet. Veteran defensive lineman CarlosDunlap was also flagged for a personal foul on a hit against Luck. The Bengals need to avoid unnecessary penalties on Thursday night.

The Cincinnati Bengals eliminated the Ravens from playoff contention last season, and Baltimore wants revenge. Cincinnati was able to overcome a slow start in week one, but that won’t work against a veteran Ravens team. The Bengals hope that playing at home will give them an advantage.

Baltimore looked unstoppable in week one, especially on defense. The Ravens have traditionally been a strong defensive team and they appear to be returning to that this season. Joe Flacco has enough talent to lead this offense to a road win in this game. Bet the Baltimore Ravens +1.0 over the Bengals on Thursday night.